Things to See and Do in Thun, Switzerland

Visit a medieval castle, take a boat trip on Lake Thun or make a day trip to the Swiss Alps in Thun, Switzerland.

The attractive Swiss town of Thun stands on the shores of Lake Thun, on the edges of the beautiful Bernese Oberland region and a short drive from Interlaken, one of the most popular places to visit in Switzerland. Boat trips on the lake are a great way to see the area and there are countless hiking paths to the foothills of the Swiss Alps.

Places to Visit in Thun, Switzerland

Fans of old castles will love the medieval Thun Castle, built in the late 12th century. Its Romanesque tower now houses Thun’s History Museum and its excellent exhibition of life in the area over the centuries.

Thun’s other castle, the Schadau Castle (Schloss Schadau), in the Schadau Park by Lake Thun, is home to the Swiss Gastronomy Museum and a restaurant with lake views. The Wocher Panorama in the Schadau Park is a 7,5 metre high and 38 metre long, 360 degree circular painting of Thun around the year 1810 and is the world’s oldest preserved panoramic painting.

The Strandbad by Lake Thun with its mountain views is one of the most scenic public beaches in Europe. The shallow water makes it popular with families and the beach gets very busy during the summer months.

Boat trips on Lake Thun (Thunersee) and the neighbouring Lake Brienz (Brienzsee) are one of the best ways to take in some of the sights around Thun. Boats connect Thun, Brienz and the picturesque Interlaken, stop in many local towns on the way and offer views of mountains, hills, historical castles and small villages. There are regular departures on modern boats and renovated steamboats, and special themed cruises are organized too. The boats leave from right next to Thun’s railway station.

Places to See Around Thun, Switzerland

The Jungfraujoch is called “the Top of Europe” and one of the famous sights here is Europe’s highest railway station at 3454 m altitude. One of the most popular daytrip destinations in Switzerland, the Jungfraujoch is the lowest pass between the Jungfrau and Mönch mountains in the Swiss Alps.

There are excellent hiking paths around Lake Thun and the foothills of the Alps for both leisure hikers and serious hikers. Trips to the nearby Niesen, Niederhorn and Stockhorn offer more mountain scenery.

Thun is less than half an hour from Bern and less than two hours away from Zürich by train. Thun’s railway station, the city’s bus station and the boat pier for cruises on Lake Thun are located right next to each other.

Top 10+ Attractions in Barcelona for Couples Who Love the Arts

Barcelona makes for a perfect romantic getaway for the art(s) lover. Here is ... 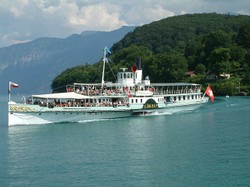 Visiting Italy is a dream of many...but is it too expensive to turn into a reality? Not necessary. Read on for my tips to enjoying an Italian vacation on a budget.
100%  43   22 Mira
Spain

Top 10+ Attractions in Barcelona for Couples Who Love the Arts

Barcelona makes for a perfect romantic getaway for the art(s) lover. Here is my list of top 10+ tourist destinations in Barcelona if you're interested in architecture and the arts.
Loading ...
Error!