To the Island of Tides

This book recounts a spiritual and geographical journey to Lindisfarne in the steps of St Cuthbert.

This is an inspiring work by a high quality author much experienced in writing about the Scottish and English borders. But it is not merely a tourist trip or a guidebook, for the author is walking in the steps of St Cuthbert to address the spiritual challenge that faces him as he nears his seventies in not the best of health. The book is a religious work, but written by a man of open mind and heart unafraid to share his difficulties with readers and not rushed into premature conclusions. The book is spiritual, historical, geographical and biographical. I commend it to readers.

Picture courtesy of Emphyrio, of Pixabay

Of Lindisfarne and Cuthbert

The bones of St Cuthbert survived the Vikings and even Henry the Eighth, England's greatest vandal, for when Henry's  commissioners forced open the nearly one thousand year old coffin they found the saint's body to be incorrupt. Disturbed, the narrow-minded zealots played safe and had the corpse re-interred. Cuthbert's body has decayed now, but the coffin  [a replacement] is still at Durham Cathedral. People still  visit sites associated with this extremely holy man of God to somehow benefit from the lingering aura of sanctity which pervades such places. Cuthbert was a monk and at times hermit, dwelling at the end of his life alone on a rocky island in the tiny archipelago known as the Farne Islands off the coast of Northumberland, England's most north-easterly county.

The author comes from a family long-established in the English and Scottish borders and is a much-published author of historical works on the borderland between the two often unfriendly neighbours, England and Scotland [he is Scottish]. At the age of sixty eight and not being in the best of health, he decided to take stock of his life as he moves into his twilight years. His method of taking stock was to follow the journeys of the local saint, the spiritual master St Cuthbert, from his birth to his final earthly destination on Lindisfarne and the Farne Islands. The journey consists of a number of short walks in the Tweed Valley, where he lives and  where Cuthbert lived much of his life, but the personal journey is interwoven with historical accounts and reflections on the oft-bloodstained history of the struggles between English and Scots [in which both sides are equally guilty, no goodies here]. He also interweaves the journey with an insight into what seems like the spiritual struggle of a lapsed Christian who still treasures much in his religious heritage.

The religious struggle recounted in this book is an ever-present background to the text, but it is dealt with in a sensitive and respectful way, and this gives an inspiring element to the text and to me, a religious writer, an insight into the way in which belief and disbelief work in a struggling human mind. I am particularly sympathetic with his account of attending the Calvinist church of Scotland as a teenager, where a traditional hell-fire preacher assailed the congregation with threats of fire and damnation, which led to Moffat's exit from the church.

The main text [minus epilogue] concludes with a stay on Lindisfarne, where he tries and to some extent seek what he calls the peace of Cuthbert and come to terms with his mortality. This section of the book gives an insight into life on an island of pilgrimage, a sacred spot treasured by many in Britain . It is well worth reading, but do not think there is a dramatic conversion, there is not, but we can detect positive changes in the  author's mental state. Perhaps massive changes are too much to be  expected, and small, incremental changes are what happens in most lives.

The first part of  the book begins with an account of the author's first visit to the sacred isle, aged fifteen. He is commencing his work from the standpoint  of youth, making a contrast with the ageing man that he is now. He and I are exactly the same age, as we share the same birthdate, so I feel an affinity to him and can sympathise with his issues. He writes about what I enjoy, and I was delighted to read his accounts of the panoramas of his native Tweed Valley, with its vistas over southern Scotland as far as the Eildon hills and out towards the distant North Sea. The word pictures of the valley are allied to an account of St Cuthbert's life as he progressed from being a young novice monk through his monastic career right up to his arrival at Lindisfarne. Cuthbert's life is set in the context  of the history of the borders and we thus have a skilful interweaving of Moffat's personal biography with Cuthbert's life story and history. I am impressed with Moffat's wide historical knowledge and the unbiassed way in which he treads the minefields of mutual blame that bedevil English and Scots relationships. A good account indeed!

The author is sensitive to place and its spirituality, and herein he reveals his religious thoughts. He rightly identifies the location of early Christian sites with pre-Christian religious features, such as standing stones, and he dwells on the intrinsic spirituality of certain places. It is here that there is an inconsistency in his thought, for he rejects any hope of personal survival after death, yet ruminates on whether ancient spirits still flit around sacred sites.  Yet despite his lack of faith, I cannot fail to be impressed by his religious knowledge and the friendly way in which he writes about Christianity. There seems to be a mournfulness about the faith that he has lost. Sad! Yet I notice a persistent error. He speaks of Cuthbert's life as a hermit as the hermetic life, while the  correct term is eremitic. But that is the fault of the subeditor or proof reader.

Yet one gets the feeling that while he likes and admires Cuthbert he cannot easily get close to this strange  and dedicated mystic and eremite. Moffat is journeying with an invisible travelling companion whom he strives to comprehend, Cuthbert is to Moffat the stranger on the road, a common figure in literature. But who can really comprehend such a mystic?

Much of Moffat's journeying was on foot, as he strove to retread Cuthbert's walks, and his modern retreading on routes in a landscape that has undergone change leads him into difficulties at times with struggles that are unsuitable to a nigh septuagenarian body. As a suffererer from a disabling condition I thoroughly sympathise. Still, the walking accounts add a further enrichment to the skilful web that  is this book and are an augmentation of its enjoyability.

Finally Moffat sets off on a journey to Lindisfarne and the Farnes. Lindisfarne is a tidal island, so you walk or drive the causeway to it and in Cuthbert's steps Moffat chose to walk. There is a human tendency to expect that a holy place will somehow radiate an instantly appreciable aura of sanctity, and Moffat is willing to confess initial disillusionment with the presence of tourism on this ancient monastic isle, but as he was staying a week he persevered  and was slowly rewarded with positive experiences. One of the most touching aspects was the presence of sick people visiting the isle not for miracles, but for the spiritual sense of the place, people whom Moffat knew to be worse off than he.

An emotionally pleasant experience and I think powerful one was his visiting a communion service at the local Church of England [Episcopalian] church, whose gentle and sensitive spirit was a far cry from the hell fire negativity of his Calvinist upbringing. It is quite touching that this [reluctant?] non-believer was inspired to light candles in the church. We get the feeling that his soul journey is not yet over and that what  the poet Francis Thompson calls the Hound of Heaven is on his heels.

Moffat eventually clarified his thoughts on life and came to realize that what he was doing was preparing for death. Later on he tells us that he was to have a prostate test, fortunately negative, but there is still something wrong. At the  time of writing he was still awaiting further tests.

This leads us to the author's visit to the island of Inner Farne, where the ageing Cuthbert went to live as a hermit and where he died. Moffatt briefly seems to struggle with this isolated death, though the Lindisfarne monks were visiting him. I think though that Moffat seems to be unaware that a mystic such as Cuthbert dwells with a  sense of divine presence. But what seems to annoy Moffat more is his sight of an irreverent young male tourist showing lack of reverence to a cross. Again we  sense that in this author we are dealing with a religiously sensitive man.

This is an enjoyable, informative and stimulating book that is well worth reading. I commend it to readers.

I am an Amazon Associate and earn money from qualifying purchases on this page.

To the Island of Tides

I think that the interest in setting the
Hound of Heaven to music was posthumous.

The last sentence in the second paragraph to your subheading Lindisfarne includes a reference to The Hound of Heaven poem by Francis Thompson.

The Wikipedia article on that poem references musical settings by William Henry Harris in 1919, Humphrey John Stewart in 1924, Miriam Gideon in 1945, Maurice Jacobson in 1953, Howard Blake in 1980 and Ronald Corp in 2009.

Was the poet -- who died in 1907, 12 years before the first setting -- aware of interest in his poem being set to music or was that something that came about posthumously, without any obvious indication before?

Yes,it is Lindisfarne. I am unsure of the origins of the name,but it is not Roman,for the Romans called it Insula Medicauta,for the medicinal herbs that grew there. These gave an impetus to its acquisition of sacred status.

Can it be that -- ;-D in a wizzley about Lindisfarne -- the image to the left of your title is of Lindisfarne?

Online sources do not present certain origins to Lindisfarne. Wikipedia etymologizes the place name as perhaps Lindsey kingdom-originating travelers (to the island off Northumberland, from what is now modern-day Lincolnshire).

That's quite a hike. What would bring settlers and visitors all that way?

Thank you for this review - of course Lindisfarne is a special place, perhaps I should put a visit there on my bucket list. The book sounds fascinating, and I can especially relate to the author's experience of Calvinist hell-fire preaching and exiting the church! 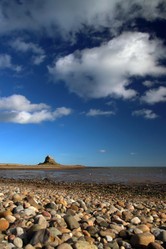 To the Island of Tides: A Journey to Lindisfarne
100%  22   14 KathleenDuffy
United Kingdom of Great Britain and Northern Ireland