Top Football Stadiums in the UK

This article talks about top football stadiums in the UK. If you are planning to visit the UK, try to go to one of these stadiums and you will never forget the atmosphere there.

Football is like a religion in most parts of the world, especially the UK. Top-flight football in the UK has fans from all over the world, English Premier League being the most famous one. But this fame and following cannot happen without iconic stadiums- that means rich history and state of the art facilities. From a stadium’s origin to its seating capacity and grandeur, several factors contribute to its popularity, which eventually makes the team popular. Not to mention, nothing comes without solid performances by the team on the pitch.

English stadiums are easily the best in the world, Spanish and German stadiums being close-match. The environment at Old Trafford and Anfield is nothing less than breath taking. If you ever happen to watch a game in any of these stadiums, you would know for sure the echo of glory reminding of Greek armies.

If you are planning to visit one of these stadiums, make sure you pick the best game of the season. Rival games are tough to get a seat, but if you do get one, you will never forget the experience.

Wembley is home to the English national football team, apart from being the host for NFL International Series. The stadium also hosts various concerts throughout the year. The honor of many European finals and international games puts it among the most famous stadiums throughout the world.

Wembley  (New Wembley) can easily hold 90,000 fans. Such capacity makes it the largest covered stadium in the Europe. Wembly was rebuilt in 2007- demolition started back in 2003.

Any football fan would know of Old Trafford, home to Manchester United Football Club. Manchester United has won 19 league titles so far and has fans all over the world. The team usually plays an attacking style football with emphasis on quick passing and counter attacking. This kind of football naturally attracts larger crowds, making it hard to find tickets for league matches. If you are planning to visit Old Trafford, try to get a booking in advance. You can book online using the club website.

Old Trafford can hold around 76,000 fans. The stadium has perfect ambiance to create the electric atmosphere with 76,000 fans chanting for their team. Anyone who plays at Old Trafford never forgets the moments.

Anfield is a sporting cathedral without a doubt. You can come to the stadium to view the greatness of footballs and fans, especially when you are visiting on a game day. The stadium is bearer of prestige and heritage of football in the country. Although Liverpool is not the most successful club in England, it is still tough competitor to England’s most successful club i.e. Manchester United.

IF you are visiting Anfield, you can contact the official website to book for official tours of the club and the stadium. These tours will take your behind the scenes so that you can see the pulse behind football in England. A walk down the tunnel will give a fantastic feeling as you go through the same area where legends have walked to face their toughest rivals over the course of a century.

You can enjoy the Marvel at the Spion Kop, which is the illustrious Terrace, known by some as the best in the World Football. Do not forget to take your camera, as you will have many photo opportunities during the tour.

Stamford Bridge is home to Chelsea Football Club. The stadium is located in Fulham, West London. If you are planning to visit the stadium to see one of the best football clubs in action, book in advance. But if you are only visiting the stadium for a guided tour, you can easily book on the same day.

With guided tour to Stamford Bridge, you will visit all the public areas in the stadium including television room, visitors’ room, the club’s dressing room, tunnel, and the dugouts. When you go through the players’ tunnel, you will have the experience of your lifetime.

A tour to Old Trafford

I live twenty minutes walk from Old Trafford. Some people are quite fearful when I say that I live near a ground with so many fans visiting, but I can assure everyone that in thirty six years living here I have only seen one minor incident, when some teenage boys shouted at a police man across the road and then ran off. I used to have a ticket, but had to give it up for financial reasons, but I have often been to Old Trafford quite often.

I've been lucky enough to visit Wembley but if I do go back to England I'll try visit of these others. 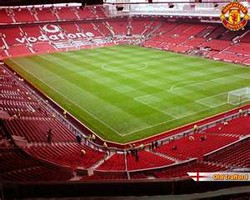