John Merril's seven thousand mile walk round Britain is just one of his marathon journeys.

Being the first person ever to complete the walk around Britain's rugged coast is an achievement, but doing it with no permanent walking companion made it an arduous route. Several people had attempted the journey, which takes walkers through Britain's diverse and varied landscapes, through seaside towns and long and sometimes dangerous solitudes, but Merrril was the first to succeed, and did so despite having to take time off with a broken bone in his foot.

Picture above courtesy of 27707.It shows the signpost at John O'Groats near the northern tip of Britain.

The journey began in London, in January 1978, where he set off from St Paul's Cathedral to walk eastwards along the Thames, before turning south at the estuary to walk the heavily populated south coast with its holiday resorts. He chose to begin from the Cathedral to invoke  a blessing on the journey, and his route westwards was chosen in preference to the alternative route up the East Coast to avoid walking widdershins [anticlockwise] for as I have said in a previous article there is some reluctance to take go widdershins, the Devil's direction, as Merril says.

The South Coast walk was rarely dangerous, and he made about thirty miles a day,  but the pressure came from the publicity. Having publicized the walk to gain sponsorship, he was sometimes overwhelmed by the reception committees of local dignitaries and voluntary groups, all of whom wanted to support him. He found that after a while it was becoming difficult to take, but often he received free accommodation and food. There were times though when his delays caused problems, and having arranged to pick up his regular food drop from sub-post offices, which in 1978 were more common in the UK than they are now in our parsimoniously managed and misgoverned land.

But never underestimate the bad weather that can smite Southern Britain, for the storms that thunder up the Western approaches and sweep up from the Bay of Biscay past Southern Ireland can be frightening and dangerous. Having reached the South Western tip of Britain and turned right at Land's End, by which he had done over a thousand miles of walking, he was on the exposed North Western shores of Cornwall and Devon, and the late Winter weather was at times severe. Walking along cliffs in severe winds was quite frightening at times, and often he was soaked to the skin from the fierce rains. It was February and March when this problem began to occur, before hotels and campsites were formally open, but fortunately he found some hospitable hoteliers and camp site owners who were willing to give him accommodation. One hotelier gave Merril a room free of charge to support his walk and opened up the bar.

Up the West Coast

Having entered Wales the marathon walk took him towards the Pembrokeshire Coast,  now a national park, for very good reasons, as it is a lovely place to walk and enjoy the beaches. The coast path was not at the time of this walk very well used and so he could enjoy being in solitude away from pressing crowds in an area of outstanding beauty.

Wales is a pleasant place to walk, and the Scottish mountaineer Hamish Brown writing in Hamish's Groat's End Walk considered it the best waking country in Britain. But Merrill had a quite a serious incident there which could have killed him.

When walking on the Llyn Peninsula near Porthor, in North Wales,  he decided to walk the beach. It was high tide but there was a fifteen foot gap between sea and the clay cliffs. Plenty of room, but he reckoned without  the arrival of what in seaman's parlance is known as a growler, a freak wave. Suddenly the six foot Merrill was submerged to his waist and was struggling against being sucked under, when part of the clay cliff collapsed on him. He managed to struggle up the broken cliff to safety. Terrified, for fifteen minutes he watched the sea, only to realize that no similar wave came anywhere near the cliffs.

After that there were no more incidents in Wales and he moved along the North Wales coast,past the fast flowing Menai Straits and through the tourist resorts. Finally he re-entered England and walked North through Cheshire and  Lancashire. He took the safe path round Morecambe Bay, whose sands are dangerous, for there are many areas of quicksand and unexpected holes in the sandbanks that have been known to swallow a tractor, After the incident on the Llyn he was taking no more risks.

Finally he entered Scotland and carried on northwards.

Merril was in Scotland when he began to have problems. By this time had walked three thousand three hundred miles and his foot was swollen and in pain. An X-ray revealed the worst: a stress fracture of the fourth metatarsal. These are found in people who exercise a great deal, such as footballers in their thirties and they have a distinct pattern of fracture that makes them unmistakable.The only cure is plaster and rest.

The doctor explained that Merril had put his body through a level of endurance that was beyond its capacity. It must be said that Merril had done several marathon walks, including crossing America and walking the length of Britain, and his body was showing signs of wear and tear. He had done some long distance practice walks to prepare for this circumnavigation of Britain, and that was much wear and tear on the foot bones.

He needed a place to rest and recuperate, and so he sought help from a lady in the RCIB  whom he had met in Glasgow to ask for help. She came up with the answer : he could stay with her for the five weeks of recovery. Five weeks turned into longer,  as the following year he married her.

The Landscape of North West Scotland

Britain is  a lengthy isle, and so in Scotland the relative lengths of day and night approach Arctic dimensions, the days in Summer being long and the Winter nights correspondingly lengthy. So it is always better to walk in Scotland in Summer, besides the fact that the Scottish climate can be quite severe in Winter. Distances are also lengthy and in the remote North there can be times when an overnight camp can be  required. North Scotland has a bothy system, old cottages left unlocked and stocked with some fuel for for the overnight traveler journeying in lonely places, and at times Merrill stayed in these, for they were drier than his trusty tent.

Besides the long distances, there were sometimes occasions when he made little horizontal progress despite thirty miles of walking, for if you look at the map of North Scotland you can see that he sometimes had to walk round a sea loch, much walking where a bridge would have made the route shorter. You can see that after walking the unpopulated wilderness south of Cape Wrath, Britain's north west extremity, where in Winter storms the seas throw hundred pound boulders at five hundred foot sandstone cliffs, he turned right at Cape Wrath and having got some supplies at Durness had to skirt through trackless land around Loch Erribol, though the next inlet, Loch Tongue has a bridge.

Turning right at Duncansby Head, Britain's northernmost point, he headed down the East Coast of Britain. The East of Britain presents walking very different from the West of Britain, for the West is more rugged and indented, whereas the East is less indented than the rocky West.

Psychologically the East Coast brings its own problems, for the long vistas ahead of you can be daunting for one who has already done many miles and it is tempting to become disillusioned. This is where the mindset comes into play. The marathon walker must be dedicated and single minded, content with their own company, while being capable of responding to those that he/she meets. Staying power, both physical and mental is a must. Being so personally involved in a walk that not finishing it is unthinkable and intolerable is part of this mindset. Merrill seems to have these qualities in abundance.

The English coast provides mainly gentle walking, though there are difficult cliffs at places that should be avoided in strong winds.But like the East coast of Scotland the distances are long and daunting. As long as you avoid obviously dangerous places you will be fine.

The coast of East Anglia is flat and level, but like Scotland this area, which comprises the coastal counties of Norfolk and Suffolk [whose names mean North Folk and South Folk,very practical naming]  can provide some long, lonely walking in which you see few people, though there are holiday resorts. South of these counties you reach Essex. While Essex is a low-lying county with the reputation as England's driest because of its low rainfall, there  are places on the Essex Coast which can be tricky. Wisely Merril eschewed the journey over the Broomway, a path across sands that is known as Britain's most dangerous footpath because of the danger of getting lost and stuck in quicksand to await drowning in  the oncoming tide. By this time he was walking along paths some distance from the sea, as the Essex coast can in places be muddy and the coast near the Broomway is very difficult to traverse on foot.

By this time he was becoming emotionally exhausted. He was summoning up his reserves of strength, but also of emotional energy. Alone he was fine, but sometimes broke into tears when he spoke to people. But by the time he was in Essex he knew that he was approaching London. All there was to do was turn down the Thames Estuary and walk inland towards the final destination.

The final  ten miles were from Poplar to St Paul's Cathedral. He arrived an hour earlier than stated, as he wanted to spend some time in prayer and and take communion, in thanks to God for being with him on route. Then at the appointed time he emerged to an official reception. Friends, the minister for sport, well wishers and television cameras  Job done!

There is a charity called The Mountain Bothies Association, whose members replenish, repair and maintain bothies.

frankbeswick, Who tends to the supplies and upkeep in the bothy cottage system of northern Scotland? 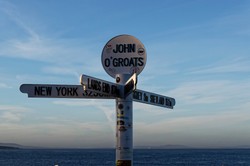