Understanding the Temptations of Christ

Whatever the literal truth of Jesus' temptations in the desert, the story is rich in meaning.

Your attitude to Jesus' temptations will be shaped by whatever view you take of the truth of the Bible.Liberal scholars take little literally, while traditionalists and fundamentalists take everything to be literally, historically true, and there is a spectrum of opinion in between. I follow a conservative line, which means that I think that the gospel writers wrote truthfully, but that stories have inevitably been shaped by the telling and writing processes, as are all tales, however historically true their subject matter is. So yes, I do think that Jesus went into the desert and was tempted, but the story has been shaped by the constraints of condensing forty days into a short narrative.

Image courtesy of heather truett, showing a cave near the Dead Sea.

Jesus in the wilderness

As this is the season of Lent it is apt to look at the event in Jesus' life that gave rise to it, his forty days in the wilderness, a long retreat of fasting and prayer that prepared him for his coming mission. Did it happen or is it a merely fictional story created for a religious purpose? There can never any certainty in historical accounts, and that applies to skeptics and non-skeptics alike, but we have to ask whether or not it is believable that Jesus spent time in the wilderness, and I believe that it is. Retreats are and were common practice among religious people, as they attempt to subdue appetites and strengthen their wills for the service of  God. So it is likely that Jesus performed one. Indeed, as he was about to set off on his mission, it is likely that he underwent a retreat. His mission: to combat evil; and the basic rule that we all must follow is that to combat evil in the world you must first combat it in yourself.

Where did the story happen? I believe that Jesus went not into the Arabian desert beyond the Jordan, but into the Judaean wilderness much nearer home. Remember that he had  just left John the Baptist, who was preaching near the Dead Sea. This was near the possibly Essene community site of Qumran, the home of the Dead Sea scrolls. In the cliffs above Qumran there were caves, which when the Qumran site was in use were sometimes, it is believed, used for community members to spend periods of prayer, fasting and silence in the solitude of the desert. They were away from the community, but not so far that no help was near. So I believe that Jesus went into one of these  caves to spend his forty days of preparation there, fighting the temptations in himself so that he could combat evil in the world.

Where does the Devil come into things? Well,you either believe that he exists or you don't. But it is worth remembering the saying that the Devil's greatest achievement is convincing the world that he doesn't exist.  However, those who delve deeply into the spiritual life sometimes become aware that there is an evil presence menacing them, and this is especially so among hermits, for some of whom it is quite unpleasant. This is why the Catholic Church insists that monks are only allowed to take up the hermit's life when they have the permission of their abbot/ mother superior and have been able to convince him/her of their strength and suitability for the life.

The Greek word for temptation,peirasmos,  is used to denote a test or a temptation. So the narrative could well be described as the testing of Christ. In the Bible the Devil throws certain tests at Jesus so as to break his mission and undermine his messiahship, and Jesus defeats him in each case. He was then ready to commence his  war against evil.

Scholars of all persuasions are convinced that the temptations are a formal summary of the pressures that confronted Jesus before his mission commenced, forty days of thought packed up into a short, threefold account.  Both Matthew's and Luke's gospels contain the same three temptations, but in slightly differing order, though the first  temptation is the same in each case. I prefer Matthew's order because it keeps the most scary temptation to the last, as a climax. But Luke has a powerful line at the end, "Then the Devil left him, to return at the appointed time." [Luke 4:13] . You don't get rid of evil, it sneaks back to do its nasty work.

Each temptation is about a perverting of Jesus' power and a misdirecting of his role as Messiah/Christ.

"If you are the Son of God, turn these stones into bread." [Matthew 4:3] the tempter whispers seductively. There is a multiple threat here. Jesus' power is other-directed,given for service, so he must not use it for himself. Yet the tempter is asking him to prove to himself that he is messiah, gaining a spurious proof that bypasses Jesus' trust in his  Father. Jesus' prayer would have been weakened; and he would have broken his fast. The fast was a necessary part of Jesus' training for his mission,so how could he have combated evil in the world if he could not control himself?  Yet he came through.

This temptation was not a one-off event, but a forty day ordeal through which Jesus had to pass. But controlling the appetites is not just for Jesus, it is something that all religious people must do in order to train their wills to virtue, which does not come naturally to us.

Note that Jesus replies by quoting scripture to say that humans need more than bread alone, but God's word. In all three temptations the tempter misuses scripture, but Jesus bats him back, using Scripture against him.

The Second and Third Temptations.

The next temptation was for Jesus to be taken to the pinnacle of the temple and be told that if he was the Son of God to throw himself down, because God would send angel to protect him.[Matthew 5:5-6.] This is a temptation to by pass the need for faith in his followers, using spectacular gestures and gimmicks to gain support. Jesus rebuffs the tempter by stating the Scripture enjoins us not to put the Lord God to the test. Failing this temptation would mean that Jesus was a mere wonder worker, not one with a challenging moral message.

The second temptation affects many religious ministers, who may be tempted to present Christianity in a gimmicky way, stripped of its challenging moral message and its call to repentance, the change of hearts and minds that the Christian faith requires.  A preacher who relies on his eloquence alone without having depth of faith and holiness of life sufficient to preach also falls for this temptation.

The third temptation is the one that I find the most frightening. "Then the Devil took him to a high mountain and showed him all the kingdoms of the world... all these will be yours if you worship me." This is the temptation to avoid the cross and use all his power to force obedience. It is the temptation to fundamentally misdirect his mission away from God to the service of evil. It is a denial of Jesus' true messiahship. Jesus rebuffs it by telling the tempter that you must worship the Lord God only. At which point the tempter leaves, but he will be back. Jesus is then helped by angels who minister to him.

When you see the evil totalitarian regimes whose tyrants that have benighted the world: Hitler,Stalin, Mao, Pol Pot, North Korea etc, you see that the tempter wanted to make Jesus the heart of a brutal regime that misused his powers and constituted a total perversion of his mission. But this temptation still affects Christians whenever Christianity is perverted into a tool of unjust political systems. Maurice Casey's tome, Jesus of Nazareth, which traces Jesus scholarship back through the ages, tells of how the Nazis tried to pervert Jesus' story to serve their cause. Fiebig played down Jesus' Jewishness, and Chamberlain, an English Nazi sympathizer, tried to present Jesus as an Aryan supremist, to name but two perverters of the truth. Yet the Nazis were not the only culprits, for there were those who attempted to hijack Christianity to the service of authoritarian socialism and toadied to Stalin and other dictators. I had personal experience of some such people in my time at theological college, and  I found them less than desirable.

Note  that after the story of the temptations in Mark's Gospel, where it is very brief and not detailed like it is in Matthew and Luke, Jesus' first healing is expelling an evil spirit. It was after he had conquered the temptations  in himself that he could challenge it in others.

For those of you who are interested, if you go to www.frankbeswick.co.uk , my website, you will find a short story based on the temptations of Christ, entitled Genius Loci. It is in the list of latest articles on the right hand side of the page. It is the seventh or eighth article from the top.

Sorry! I edited the website and took off some short stories, as I thought that the site was becoming too diverse. I forgot that I had mentioned it on the temptations of Christ.

frankbeswick, I went through all 17 pages of your website and did not find Genius Loci anywhere among the arboricultural, architecture/engineering, historical, horticultural and religious insights.

Knowledge of Jesus'divinity was slowly disclosed, for at no time did he say that he was divine. His strategy was to make a claims consistent with divinity and do God's work on Earth, finally gaining approval of his father by the resurrection, which confirmed his claims.

I agree. The gospels contain the apostles' experience of Jesus, but of his inner consciousness we know almost nothing.

Well thought through, and well timed. Either the devil had not learned he could not defeat God, or had not yet concluded Jesus is God. One debate is when did Jesus Himself know of His divinity, so it may have eluded the devil as not yet apparent. Jesus was careful about revealing thing slowly. 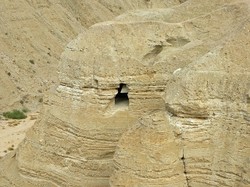