A selection of decorative pillows designed with beautiful images of Our Blessed Mother.

Mary, the Mother of Jesus, said "yes" to God's plan even though becoming a mother, before living with a man, carried great risk. Potentially, she could have been stoned to death, even though she was an innocent virgin, if she were found guilty of adultery.

Although she was probably very frightened, she gave her consent to bear God's only Son. She also carried a horrible burden, knowing from the time Christ was a baby that He was destined for great suffering.

When Christ was crucified, most of his disciples fled. It was Mary, along with Saint John the Evangelist and former prostitute Mary Magdalene, who stayed at the foot of the Cross, until His body was taken down and put into her arms.

Catholics honor Mary as the Mother of God because she was chosen from among all women to bear the Messiah, whom would die on the Cross to atone for the sins of mankind, and open the gates of Heaven.

Some non-Catholics believe that we worship Mary, but this is not true. Because we seek to imitate Christ, we want to treat her in the same respectful manner that He did. He would never dishonor his mother, and neither should we. This is woman who carried Him for nine months and raised Him from infancy.

Mary also had a great deal of influence over Christ, because we know from Sacred Scripture that His first public miracle happened when it did, because she implored Him to change water into wine. We believe she still asks Him to do things in Heaven, which is why we often send her our prayers, knowing Jesus will listen to her.

Pixabay image above by tpsdave

The richly detailed pillow below is made by Zazzle, an online custom gift shop, designed by individual artists, with a wide range of Catholic items. This pillow shown measures 16 by 16-inches, but it's also possible to order it in several different sizes, including 20 by 20-inches and an elongated 21-inch back-support pillow.

Zazzle pillows designed with images our Our Lady would make a great gift for a fervent Catholic, a seminarian or someone in religious life.

Our Lady of Guadalupe Pillow

Devotion to Our Lady of Guadalupe is based upon a Church-approved apparition that happened in 1531. A Native American peasant named Juan Diego (now Saint Juan Diego) met a lovely woman clothed in the typical-style precolonial Mexican dress one morning while walking to morning Mass.

She asked him to approach his bishop, because she wanted a church built on the spot where she was standing. However, the bishop did not believe Juan's tale of the account. However, Our Lady left a visible imprint of her appearance on his tunic, as well as a handful of fresh roses, two clear signs he was telling the truth.

Today, the Basilica of Our Lady of Guadalupe stands upon the spot in Mexico City where she appeared. Millions of Catholics also honor her under this title.

The vintage-style pillow below shows Our Lady in the warm colors of the Mexican desert, where she appeared. Below her feet, you can see a pattern of red roses, a flower closely associated with Our Blessed Mother, as well as this particular devotion.

Our Lady of Sorrows Throw Pillow

The pillow below represents Mary under the title of Our Lady of Sorrows. There is a particular Catholic devotion that commemorates the sorrows of Mary's life, beginning with when Saint Simeon in the temple warned that a sword of sorrow will pierce her heart.

Throughout her life, these sorrows increased in intensity. The flight into Egypt brought hardship, and was a reminder of the persecution to come. Then, when Jesus was 12, He was lost for three days, a precursor to the three days when he would be lost once again, following His Crucifixion.

On Good Friday, Mary's sorrows came in rapid successful. She watched Her Son carry his Cross, she watched him die on the Cross and, finally, she held his lifeless body just before she endured her final sorrow of leaving him in the tomb.

A Pillow that Depicts the Annunciation

Without Mary's "yes" to the Angel Gabriel, God's messenger, we would not have Jesus. We owe her so much. The pillow below shows this familiar Biblical scene, in which a young girl answered God's call. The pillow below is a reprint of The Annunciation, painted by Renaissance artists Benvenuto Tisi, who was born and died in Ferrara, Italy.

Hi WriterArtist, she certainly did have so many virtues, which I try to imitate, but always fall short. Thanks so much for reading.

Mary was a mother with great virtues. These decorative pillows look lovely and inspiring with Virgin Mary printed on them.

Hi VioletteRose, thanks for reading. I really like them as well.

You have written this really nice, I felt sad for her when I read it. The pillows are beautiful. 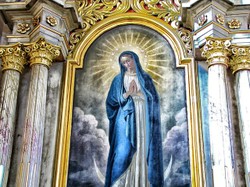