Newborough, on the island of Anglesey, is a location where conifer forest fringes onto a shore lined with dunes and small, sandy cliffs.

I love walking at Newborough, on the South Eastern shores of the island of Anglesey, off the coast of North Wales. You find forest, shore and an historic island all within walking distance. We have walked there several times over the years. It is an area popular with families going for a walk along the beach, from which you can see views of Eryri [Snowdon] Wales' highest mountain, and the distant and beautiful Lleyn Peninsula, sometimes clearly and at other times through a haze of sea mist.

The picture shows the observation platform at Newborough Beach

The best way to access the forest is to drive through the village of Newborough and follow the signs. On the bend as you pass through the village there is a path to a car park that provides access to the beach by a forest walk, but the main car park, with the facilities is further up the road and is well sign-posted. On foot you can walk in free, but cars have to pay. The price is currrently £4, which is not bad. This is not a National Trust property, so my National Trust card does not let me in for free.From the car park there is access to either the beach or to forest walks.

The forest is mainly conifer [Corsican Pine]  woodlands, though there is some birch, a tree that self seeds anywhere and which is proving popular with foresters as it provides a fast growing crop for the sale to the many Britons who have wood burning stoves, of whom I am one. The forest fringes onto the dunes, and there is some evidence that some trees on the dune and cliff fringe have fallen victim to erosion in the savage storms that have beset Britain in the last few years.

What strikes me about walking through Newborough Forest is the deep silence. You walk along well-constructed paths  amidst tall trees in an atmosphere of almost religious quiet, undisturbed by engines. The combination of low light caused by the shading effect of the tall trees and the almost undisturbed quietness of the woodland is calming indeed. Occasionally you hear the cawing of ravens, but there are few squawks of gulls, as these pragmatic scavengers lurk in the towns where they know there is food to eat. The occasional natural bird sound plays descant to the silence. Strange that natural sounds such as bird song and the sighing of the wind amidst tall trees does not disturb in the way that unnatural sounds do. We are meant, I believe, to enjoy noise only against a background of silence. Such sound is not oppressive as the sounds of the city sometimes are.

Occasionally we see the forest's most treasured residents. Red squirrels!  These little fellows are under threat in Britain, as they were out-competed by the more muscular American Grey Squirrel, which also carries a virus fatal to the red. But the red has one advantage, it can nest and live in conifer, whereas the grey cannot, so the various conifer woods are now a refuge for this threatened native species. However, they are shy, so be glad if you see one, but do not expect to do so. The best way to see them is to sit and wait.

Time goes full circle. Thirty five years ago we went walking in Wales with my son Peter in a baby sling hidden in Maureen's coat against the cold.This time it was our daughter Helen with our three month old grandchild in  a baby sling. We walked the beach.I walked a bit ahead to allow the two women a chance for baby talk uninterrupted by a male presence. But I enjoy strolling the beach, picking up and identifying shells and other flotsam which lands on our windy shores.

As one keen on nature I peruse the shells to be found.As usual for West Britain we find razor clams, and two species of oyster shell.I find a broken whelk shell, tossed up from deeper waters offshore. There is little plant life, but the seaweed lines the shore. The horticulturalist in me sees it as mulch for the garden, but I cannot take this home. Above me to the right I see eroded sand cliffs, from which some dead trunks hang pendulously. Again, I revert to type and think of how to deal with the dead logs. There are a few dead  trees in situ in the dunes, as the salt from the storms of last winter has sprayed the ground round them with lethal salinity.  The two women continue their earnest conversation. I am not lonely. I never am on a beach.

Part of the joy is the view. Some days you look eastward and rest your eyes on the bulk of Snowdon. Today's walk, February 2017, was misty and the mountains were part obscured, but the mist was not thick enough to obscure the snow that scrolled in threads across the high peaks. A lovely sight and a reminder of days when I walked the snow clad summits. Further to the west the view reached to the sea-mist-obscured lands of the Lleyn Penisinsula,whose hills, blue in the distance on a fine day, called to be ascended, as if to say, "Why ignore us for the large summits of Snowdon?" True, these are hills for walkers not climbers, walkers  with time to spare greater than a rush out of the English cities for a day's brief challenge in the wilder areas of Wales. As I have said in an earlier article, the Lleyn is a lovely land, its character born in the slow maturing of ages.

Then we were disappointed. As the beach grew rockier Llanddwn island hove into view and we were stopped in our tracks. It is a tidal isle cut off at high tide, and we had come at the wrong time. The water between the isle and the mainland was not deep, but deep enough and cold enough to stop anyone with a baby. We turned and went back to enjoy a picnic in the car park. But not to feel deprived! I have oft-visited the isle and can write about it from long experience.

The view from the beach

The island is the end of a spit of pre-cambrian lava that juts proudly into the Irish Sea. A weak point in the middle has caused it to erode and turn from a peninsula into an tidal islet, cut off at high tide, but  accessible by foot at low water.  The steep landward end is accessible via a series of thoughtfully provided steps.

The isle has a legend to it, the tale of St Brynwen, who became a consecrated virgin and hermit after love troubles. She is the Welsh equivalent of St Valentine and used to be invoked by lovers to ask her help with relationships, for her prayer was that all be happy in love. For the ancient British islands and wells were sacred places and so the well on the isle,now blocked, was seen as a sacred well where the saint could be invoked. The celebrant of the invocation process was always the senior woman present, who would drop bread crumbs into the well and read their patterns,the aim being to determine whether a lover was true or not. This was a variant of a practice widespread across Celtic Europe.

You walk along the narrow path along the rocky crest of the isle to see the few edifices still standing on this deserted island. There is a lighthouse at the tip, and nearby there are some lighthouse keepers cottages now kept for the island's wardens for their temporary stays. I am unsure whether any are used for holiday cottages. A cross celebrates the ancient Christian history of the isle.

There is also the remains of the monastery destroyed at the Reformation, an act of vandalism that took away much of the culture of England  and Wales under the leadership of a greedy king and ruling class and a powerful band of religious fanatics. I stand in the monastery grounds, and rue what has been lost. The church walls are home to nettles, but in the remains of the abbey garden I see silverweed, which the monks grew in the days before the potato took over. I say a quiet prayer within the ruined walls,for I do not want the original purpose of the church forgotten. Then we walk to the tip of the isle where the lighthouse stands as a safety beacon for vessels,much needed on the dangerous coasts around that area.

The path is not circular. You can return through the woods, but we return by the beach, for we know the way better than we know the woodland paths.

Dropping the bread crumbs was to create a pattern that a diviner could read.It was like reading the tea leaves.
Silverweed was initially placed in the genus Potentilla by Linnaeus, hence Potentilla anserina, but in the 1990s it was reclassified as a member of the genus Argentina, hence Argentina anserina. The reclassification was controversial and some authorities will not accept it.

frankbeswick, Why were bread crumbs dropped into the well? I'm trying to imagine how quickly they would break down and what the impacts would be on water quality.
Also, is silverweed Argentina anserina?

The picture above gives a view of the hills of the Lleyn Peninsula.

It is a lovely place.I did not say that this week the viewing platform, which you see in the thumbnail, is being shortened because of coastal erosion. I think, though, that erosion there is simply widening the beach. 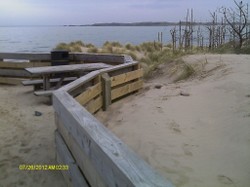 The Other British Isles: A History Of Shetland, Orkney, The He...
100%  22   14 KathleenDuffy
United Kingdom of Great Britain and Northern Ireland