Langdale in Cumbria is a location which is great for walking.

Langdale, whose name derives from the Norse Long Dale [valley] shoots off west of Ambleside, a pleasant, compact little town at the head of Windermere, England's longest lake, in the Lake District, part of the ancient county of Cumbria. The dale provides opportunities for walking and climbing. At points there are great views, and the level of walking can be varied from energetic to relatively easy.

I first visited Langdale one frosty January in 1974. It was dream walking weather. A cold high pressure zone was hanging over Northern Britain, and there was a cloud-free, icy-blue sky that lingered for a few days.  I had hiked up the dale during the previous night, as there was no late bus service in winter, and I had no car, eventually hitching a lift from a charitable elderly couple who took me to my climbing club hut.

Langdale splits  into two at its head, branching into Mickleden, whose name means large sheltered valley, and Oxendale, where historically the Cumbrians used to shelter oxen from Scottish and sometimes English raiders. Between the two is a protruding snout of rock that slopes steeply up for over two thousand winding feet. This is known as The Band, and it is a good route into the fells [local name for hills] above the valley. You can see Mickleden and the Band in the thumbnail at the top.As you reach the top of the band, you can turn to Bowfell, one of Cumbria's higher summits, or go west to Crinkle Crags.

I chose the latter route and had a memorable walk. After forty years I still recall the view. The crystal air had no haze, and so the view was unimpaired. You could see the serried hills of the English Lake District rolling away into the distance, and beyond them the panorama stretched to the Pennines, whose three chief peaks, Ingleborough, Great Whernside and Pen-y-Ghent, were easily identifiable. The latter is a Welsh name, but Welsh was spoken in parts of Northern England until the twelfth century. To the North the hills of Scotland were in the blue distance, and far away I thought that I could espy Snaefell on the Isle of Man.

I have ascended since then, but not been able to snatch the unimpaired view that I once had. This is a crystal among memories, a diamond that endures when other memories fade. Maureen and I had not met at that time, so I have told her of the view, but she has never managed to see it for herself, as climate conditions have not been replicated while we were present.

Picture at top by Drew Rawcliffe

Maureen has favourite walks, and this is definitely one of them. "Where shall we go walking?" I ask. "Can we go to Stickle Tarn?" she replies, knowing that I will say yes. I wonder if the walk is haloed in her mind. Our first holiday together was in Langdale, and I took her up the walk to the tarn, a name that denotes a small glacial lake.

The tarn is in the Langdale Pikes, a group of quite small, but tough peaks. The full walk around the Langdale Pikes is a good six hours. I recall once taking Andrew, my eldest son, and having to turn back because the wind was so strong that it blew him over. But that was a winter walk.

The route begins besides the New Dungeon Ghyll hotel and climbs steeply along a rocky track. You pass an impressive waterfall on the way, before the path levels out into an stretch which is quite boggy. But you cannot lose your way and there is a good path. Eventually you reach the tarn. It is damned at the end, and if the ground is too wet you can enjoy your lunch sitting on the stone damn besides its chilly waters. In chilly winds many walkers rest just below the damn to shelter while they eat. A word of warning:mountain lakes in Britain are so cold that you should not swim in them, as you can easily get cramp. There have been drownings. Look and enjoy, but don't enter the water.

There is an enjoyable walk around the tarn in good weather, though if wet the ground is very boggy. One route takes you over to Easedale Tarn, and this is a comfortable walk, though as a round trip it  can be quite long.

Another route takes you up the steep Pavey Ark, which you can see at the back of the picture. Its narrow summit makes you aware that you are on a real mountain, and there is  a great view.

But one blessing to this walk is that there are eating and drinking facilities at the bottom when you get down. We always conclude our walk with tea and cakes before we make the long drive home.

This is not strictly Langdale, but a side valley that opens into Langdale further down the dale, but there is a way to enter via the head of the dale, and this makes the best walking route. Maureen and I love it.

You leave your car in the car park near the New Dungeon Gyll. There is the old Dungeon Ghyll nearer the head of the valley, which is an old drovers' inn used when cattle were herded over the mountains. That's why we needed Oxendale, a tight place,  easily defended against Scots raiders. But remember, there were English raiders who raided their own people. Armed robbery has no loyalty.

This route follows the tightly winding road over the pass between Langdale and Little Langdale. The route is best taken on foot, as the roads are very narrow and in tourist season it is possible for cars to be caught in traffic jams. On our first holiday Maureen and I, car-less at the time, strolled along the road on a sunny day, smiling at the drivers trying to pass each other on narrow roads, confident that we were better off on foot.

Near the head of the the dale you see Blea Tarn, a quiet mountain lake fringed by woodland, in which you can walk. The woods and lake give a charming and peaceful element to this walk.

The chief joy of Little Langdale is the peace and quiet of the place. If you forget the cars, which don't bother you really, you can walk without interruption along country roads. Eventually you will find footpaths that lead you over the hills back to Langdale. Other than the steep beginning, this is not a demanding walk. Maureen and I enjoyed it on our latest visit, when the weather was fine and the area as peaceful as it usually is.

There are villages in Langdale. There is Langdale village itself, which is a pleasant place to stop and  have  a cup of tea. There you are, English and tea, did you expect anything different?Elterwater is a glacial lake ponded against a morraine half way down the valley, and has become the name of a village. The name is Norse for Swan Lake. I have never seen swans there, they must have left a long time ago, but their memory is enshrined in the place name. There is also Chapel Stile, some way further up the dale, where you might buy some provisions. All in all, Langdale is one of England's treasures. A great little place and worth a visit. Maureen and I have been visiting on occasion for many years, and we hope to do so for many years more.

Totally agree, this is a beautiful area to walk. Loved reading this.

There is a road in Langdale, but it is narrow, and when it reaches the pass to Little Langdale it is narrower still. In the small dales at the head of Langdale, there are no roads at all, just paths, and the path up Mickleden takes you a long way on foot into Borrowdale, one of the Lake District's loveliest dales.

As you are from India you may not be familiar with English place names, so I had better explain terminology. In the old dialect of Northern England dale means valley. It is the same word as the Danish and Norwegian dahl, for the north of England was settled by Danes and Norwegians, who are ethnically close to the English. Mickleden means big sheltered valley, mickle being an old dialect word for large/big. In northern England a local word for hill is fell, which is close to the Norwegian word fjell. A tarn is a mountain lake, which usually has hills on three sides.

All I can say is that the country side of United Kingdom is stunning. I love to take long walks that connect me to Nature, sadly the place I live is urban, full of people, buildings, dust and pollution. This was not what old Bangalore - the pensioner's paradise was known for. Langdale reminds me of the good olden days when people use to commute on their legs and were not depended on the vehicles for everything. I wish there were more vehicle free zones. 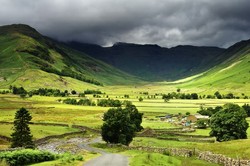