When people think of Snowdonia they often think of large, jagged peaks, but the lower hills of the north-eastern tip have their own charm.

My introduction to Snowdonia came when on holiday I took to walking and scrambling in the low hills of its north-eastern tip. The area is not a mountaineer's paradise with cliffs and physical challenges, but it is a place for walks in generally,though not always easy terrain.It has enough to satisfy a hill walker, but it does not make many demands.There are easy walks, especially on the Roman road that projects itself through the hills and forms the boundary of the area about which I am writing.It is a nice place to go walking.

On the Roman Road

My first sight  of the Roman road that runs its lonely path from the Conwy [Conway] valley down to the small,  lush valley that begins in the shadowy north-facing cascade of Aber Falls  was at the age of eighteen when I surmounted the two thousand foot bulk of Tal y Fan and strode a short distance south. I had taken a footpath up the steepest part of the walk, the ascent from the narrow coastal plain that contains the town of Pen Maen Mawr, where I was staying. I then took paths across the moorland with my eyes set on the summit ahead  of me, Tal y Fan, the final Munro in the Carneddau [pronounced carnethI] chain that snakes for uninhabited miles southwards.  I sat on a rock on the slope above the road and pondered on the view. The road ran,insensitively I thought, through two megaliths, sacred stones disregarded by imperial might and  arrogance. Known as Bwlch y Deu Faen [pronounced bulch uh doo fine] the Pass of the Two Stones, the spot was something of a crossroads, for leading southwards is the beginning of the high path that leads along the Carneddau Ridge, one of the great walks of Britain [see my article on Wizzley.] I was entranced by the sight and yearned for the hills.

Why did these long departed imperialists  build a road over the hills? Simple! The coast was unpassable by road.Around the small hill of Conwy Mountain there is Morfa Conway, Conwy Marsh. It is now drained, but in Roman times it was unpassable. But beyond it lie two headlands of solid igneous rock that were only tunnelled in the nineteenth century as engineers drove the A55 towards the crossings to Anglesey. So the Romans were forced to detour along the pass that leads from the valley of the river Conwy, which they desired for its pearl-bearing mussels, down the steep path that leads to Aber and then along to the fort of Segontium at modern Caernarfon on the coast.

On another occasion I walked the road from Aber with three of my four children. I  can speak of it now as the fourth child is now a twenty nine year old, six foot one amateur athlete who runs half  marathons, but at the time he was yet to be born and struggling for survival in the womb. With Maureen in antenatal  care I had been left to mind three children under ten years old, fortunately in the school holidays. I took them walking in North Wales one day. So three children and I walked an ancient road and culminated in a meal at the Aber Falls Hotel. A memorable day!

On another day I made a circular walk, depositing the car on the road above the foot of Conwy Mountain, all seven hundred feet of it!  I then ascended to the remains of the hill fort on the top and took the paths to Tal y Fan. But instead of turning west to Aber I took the Roman road east passing down through small villages until I reached the lush Conwy valley and could turn north to hike along good roads nigh unto a sparkling river to collect my car.

There are good family walks based around the Sychnant  Pass, a road route from the Conwy Valley to the plain between the two headlands that contains the town of Pen Maen Mawr.   The Romans did not bother with this route as it would have taken them over the narrow strip of sand beneath the headland of Pen Maen Mawr [Big Stone Hill] which would be ideal for an ambush by the Britons,who would have found many a boulder to roll down onto the Romans. The route to Aber would have been the safer of the two. So  the road up the Sychnant had to wait until the days of the mail coaches when it provided a better coach route than the tidal sands of Morfa Conwy.

The Sychnant gives  access to several low hills: Conwy Mountain [Myndd yr Dref, Citadel Hill] Pen Maen Bach [Little Stone Hill] and Allt Wen [Fair Hill.] Pen Maen Bach is denuded rock, but Allt Wen is still well-vegetated.  There are a few small stone circles in the vicinity known as Druid's circles. but this is a misnomer, as the cultus of stone circles antedates the druids by centuries, as it goes back to the Neolithic and Bronze Ages, whereas the druids were an Iron Age cultus of the oak. Still, they are worth a visit for their atmosphere.

Sadly, access to the privately owned Fairy Glen is now so difficult that I cannot recommend it as an attraction,even though I thoroughly enjoy the dancing of the exuberant stream through the enchanting woodland. But the area has good facilities for eating and drinking, so walks can culminate well.

One hill is Foel Lus. Foel is a mutated form of moel, which means bare hill. I cannot find a meaning for lus. It stands above the town like a huge pyramid with scree slopes. There is a route from the Sychnant over boggy ground, but at eighteen years old I ascended the slope directly. Scrambling up the steep slope was great fun. I took the opportunity to walk over to the slightly higher Craig Hafod Wen, which is a bit further from the town. This name means "The Crag of the Fair Farmstead."A hafod was a summer residence used in transhumance farming, the movement of animals from lower winter pastures to higher summer grazing.

It was on that walk that I was buzzed in a friendly way from a height by the mountain rescue helicopter. I had sat down on the slopes of Craig Hafodwen when the pilot must have seen my motionless figure, so suspecting a casualty he turned to investigate. In these circumstances DO NOT WAVE, as this makes the pilot think that you are seeking help. I just stood up and walked around. This was far preferable to what happened years later when a group of us were buzzed by a jet fighter, probably on a photo-bombing practise. That was scary, and I knew then the truth that my father told me, a fighter comes at you before you can respond. But he knew from grim experience!

The current lockdown prevents me from travelling for walks, but I know that many of you are  in the  same boat as I am. But like me, you love to walk in lovely hills, enjoying the wind in your face and the green of the  gorse and the heather, the tinkling of streams and the sounds of waterfalls, so to help you I have drawn deep into the wells of memory, reliving visits and walks long done.  I hope that you enjoyed walking with me through the fields of memory as much as I have enjoyed writing down my recollections for you.

Photo-bombing! Fighter pilots practise by having cameras fitted in place of real bombs. They then "attack" a chosen target and on return their photos are studied for accuracy.

frankbeswick, Thank you for pictures, practicalities and products: I recognize Portmeirion from The Prisoner television series!
What is photo-bombing?

Another trace of Roman presence is botanical. Ground elder was introduced by the Romans as a salad vegetable, and now it has become an invasive weed that I was yesterday digging out of my allotment! Like the past, you cannot get rid of it!

Yes, the history of Britain has left visible traces all over.My city, Greater Manchester, has a name that derives from a Celtic term appended to the Saxon name for a Roman military camp,chester. . My district, Stretford, comes from the Latin Strada,the name for a Roman road, which forded the nearby river.We cannot see the surface of the Roman road, known as Chester Road, which runs 300 yards from my house, for it is now buried beneath the modern road, but its trace is found in the fact that it runs completely straight for miles.We can still see the remains of the Roman fort at Manchester.

You have a rich history if you can see remnants of Romans' presence, albeit it was not a pleasant occupation by an army. Yet it did contribute to what has become of Britain, as did every other influence over many years.

The road is mentioned in Rosemary Sutcliffe's "The Lantern Bearers" but you can tell that it is Roman from its construction, carefully placed and fitted stones that have endured centuries of wear.It is in great contrast to the heavily eroded path that I mentioned as going off from it, which when I last walked there showed significant water damage.

Frank
Yes indeed, I have enjoyed it. also I never knew that road was Roman before today . Ty . 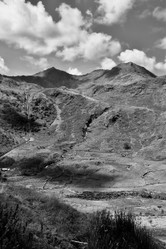