Walking on the Lleyn

The Lleyn Peninsula is the extremity of North Wales, a long stretch of open countryside with small coastal towns on its fringe, but with a large, agricultural interior of small farms, quiet lanes and ancient remains through which hikers can wander. There is a variety of routes that can be taken in this peaceful, unspoiled land, and they can be done without the heavy exertions that accompany walking in the mountainous districts of Snowdonia to the East. In fact, the Lleyn benefits from its geographical extremity, for the bulk of the tourist trade tends to stop further East, leaving the Lleyn to the more discerning visitors for whom quietness is appealing.

The image above is courtesy of Gail Johnson.

I walked, or more like scrambled up the ancient earthen ramparts of Dinas Dinlle, a deserted Iron Age fort left now to the unrelenting mercies of the sea, which has eroded part of it away. You do not find any great mysteries in archaeological sites, so the visitor who only sees the surface will be disappointed. Such sites are places to sit and think, reliving the past as it was seen by the ancients. The fort guarded the entry to the Menai Straits from unwelcome visitors, often Irish pirates who were enthusiastic participants in the internecine strife that besmirched the British Isles. Later, as pottery finds reveal, the Romans used the site as a signal station. But the Romans went and the Irish came, the southern Irish kingdom of Leinster capturing the fertile land, hence its enduring name Lleyn, after Leinster. But the Welsh regrouped and conquered the small Irish settlements that had sprung up in the post-Roman period and the land reverted to being part of Wales.

The north coast of the Lleyn contains a variety of walks. They begin after Dinas Dinlle, and walkers can stroll along a level landscape until they come to the rockier ends of the land, where going becomes tougher. I chose the beach with its soft sand and warm south westerly breeze gusting in my face. Ahead were the blue hazed hills of the western part of the Lleyn that provide an enchanting aspect to the walk. Then as the fast-flowing tide began to flow I retraced my route down quiet lanes along the coast.

Wales is a country with a continuous coastal path from Chester in the North to Chepstow in the South, and eighty of those miles are the Lleyn Peninsula, and that's not taking into account the Lleyn's interior, with its network of lanes and footpaths. The North side looks over the Irish Sea and the South overlooks Cardigan Bay, the wide expanse of shallow water that stretches down towards distant Pembrokeshire. At the tip you espy Ynys Enlli, Bardsey, the island of ten thousand saints, the destination of centuries of mediaeval pilgrims at the end of a route that led through Wales, a sacred monastic  isle to be reached only by crossing some difficult water. Now managed by the Bardsey Island Trust it has a resident warden who protects the large seabird colonies that thrive on its lonely shores, but the monks are no more.

But the Western tip of the peninsula contains Hell's Mouth, a bay that has proved the graveyard of many a sailing ship. In the days before steam ships sailing down the turbulent Irish Sea dreaded being wind driven into the Hell's mouth by the powerful South Westerly gales that  drive up across Ireland, for there was no safe harbour there and no way out. When standing on the cliffs above this bay, reflect on the ships, sailors and passengers who died there. It is a sobering thought to realize that such beautiful places are sometimes so dangerous.

The North coast of the Lleyn [pronounced clean] possesses some relatively small hills along which there can be some interesting walks, although hikers must be careful of what are steep slopes in places. There are hills and headlands in other  parts of the peninsula, and along the South coast there are some well frequented and popular holiday resorts that take  advantage of the pleasant sandy beaches that fringe the shore there.

One place to visit is Nant Gwrtheryn. This is a secluded valley on the North shore where abandoned quarry buildings have been converted into a Welsh language centre, but its claim to fame is the  legend of Vortigern's grave. Vortigern was the pendragon [high king] of the Britons, the man who was never forgiven by the Welsh, as it is said that he brought the Saxons to  England, only for them to take over the country. But this is hardly true, for there were Saxons in Britain before Vortigern, and they were introduced as allies against the Picts. Had the Picts won the country would have been far worse off than it was. But the disgraced pendragon was blamed and fled to his place of exile in Wales, where he died, There is a legend that his grave is in the valley, but no one can identify it among the small number of tumuli to be found there.

Another interesting place is the Whistling Sands. A good circular walk begins at Porth O'er and takes you along an up and down route of coastal hills and rocky coves before reaching Mynnedd Anelog [Mount  Anelog] a small coastal hill with good views. The wildlife is part of the experience, for you see a variety of birds, maybe being lucky enough to see Britain's rarest corvid, the chough,a cliff dwelling bird with red legs and beak.On the furthest extremity of the walk you reach the Whistling Sands, a small area of beach were the sand squeaks underfoot, due to the grading of grains by the action of the sea.

This is an ancient land that has seen many storms and enjoyed many blessings. It is said that many of the farms are still identifiable from mediaeval documents, and they may have been old even then. One characteristic of the area is that  trees are few, as the wind from the Irish Sea scours the exposed land and kills any nascent trees. This is a land for sheep and cattle.

But it is also a land of saints and pilgrims. The ancient pilgrim route that led to Bardsey [Ynys Enlli]  that lies off the  Western extremity of the Lleyn passed through this land and the land was hallowed in their passing. One trip across the harsh tidal streams to Bardsey was considered nearly as good as a pilgrimage to Jerusalem. The pilgrims  would stop and wait at chapels on the Western tip awaiting the correct weather conditions for a safe passage.

The coastal walking in the far West of the Lleyn is spectacular. One lovely stretch is along the headland of Mynydd Cilan. This is a stretch of land that was not considered economic to improve with fertiliser, and as low levels of fertiliser are ideal for wild flowers, which suffer in the high fertility of fertilized soil, the ten kilometre walk around the headland is spectacular with the abundant flowers of heather and other moorland plants. Wildlife thrives on this remote terrain, birds thrive on the wild flower pollen and the insects, and seals can be seen in the rocky coves on which the coastal path looks down.  Wild birds seen include Stonechats, wheatears, linnets and yellowhammers, not the birds that you normally see in towns.

Around the tip near the pleasant town of Aberdaron is the treeless landscape of Uwchmynnydd. This are makes for good walking, and moreover, many fishermen like to angle off its rocky shores, as the fishing is said to be good. Pollock, a relation of the cod, enjoys the rocky seabed  found in that area. But the whole  area makes for excellent walking. It is one of Britain's quiet places, where you can enjoy tranquility and sometimes solitude.

The Lleyn is a lovely part of Wales oft-overlooked by non-British visitors. As I am retired I now intend to  visit some parts of Britain which I have not had time to enjoy as much as I would have liked.

I would love to retire there as well. As long as I have a bit of land to cultivate and beautiful scenery to walk in, I will be content.

Lovely account of walking in what sounds like a lovely place. Makes me want to retire in Wales!

Thanks, your comments are much appreciated. You are correct.for me a walk is a serene experience in which I engage my mind in peaceful thoughts, enjoying the whole experience to the full.

I compliment you on painting the image with words. Ad I always get an impression that your walks are serene. I enjoyed your piece. It was great to read.

I do just that too. I want others to share the beautiful places I am blessed to see.

This is a lovely post and describes the beauties of Wales very well. The coastal path is a delight.

Dear Mari, your response delights me, as I write to share my experiences and feelings about beautiful places so that others can enjoy them, and this is especially so for those who have not the opportunity to walk in them. I know what it is like to slow down, as I am no longer as supple as I used to be, and certainly not as fast. But I think that even if walking becomes more difficult, there is no harm in enjoying beautiful places by using transport.

I don't know this part of Wales at all, Frank, but you make it sound delightful. Sadly, I can't do as much walking now as I used to but I do what I can when I can. Unfortunately that means that the more remote parts of the countryside are off limits but I'm lucky that I managed so many of them when I was younger - and fitter. 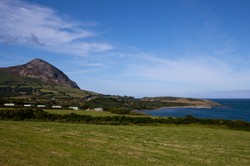 Review of Paul: a biography16 days ago