Walking on the Orme

The Great Orme above Llanduddno provides some pleasant walking

There is a delight in the low hills that is not found on higher summits that provide panoramas, but are short on life. The Great Orme is a low limestone hill, roughly 650 feet above sea level. A peninsula jutting out into the Irish Sea, it is a prominent headland. Easy of access, it provides a range of walks that take a healthy and fit walker maybe two or three hours. It is to be distinguished from its partner, the Little Orme, a smaller headland at the eastern side of the bay.

August on the Orme

Maureen and I had taken our usual route to the summit, starting from Llandudno, a lovely seaside town on the North Wales coast. We began by walking the steep road past the tram station. This is the steepest bit, but the upside of this is that you make much height early in your walk and then can enjoy a shallower gradient afterwards. Very early in our walk we spotted one of the feral goats that roam the hillside. It was safely up a cliff away from bothersome humans. We were to see more of them, more than I have ever seen in one go.

What struck me was the colour. There is a conservation area just below the summit, and it was rich in heather flowers. Heathers of red and purple grew in profusion, and bright yellow blossoms of gorse at the end of their spiky stems were interspersed among them. The thin limestone soil of the Orme is a boon for such beauties, as wildflowers grow best in the poorer soils of the countryside, as opposed to the rich soils of gardens. Keeping my eyes open I spotted small violets dotting the turf. Yes, it was August, when the rich flora of the mountain was in bloom. We had come at the right time.

The Orme is not wild land. In permaculture terms it is mainly zone 3,  pastoral land, where sheep and cattle are farmed, with some zone 5, wild territory. The wild bit is the cliff edges.  Where the cliffs are concerned, look, enjoy and be careful. They are steep and dangerous, but if you stay away from them there is plenty of space for safe enjoyment. The Orme is well-supplied with paths, but even off the paths the turf is springy, and the porosity of the underlying limestone means that surface water drains away quickly. You will note that there are no streams on the Orme.

After the top we walked down around the headland, following the path along a wall that contained a field of cattle. Again the vegetation was rich. What interested me was that on this walk I spotted something that I had missed over many years: a limestone pavement,known elsewhere in the world as an alvar. This is a nationally rare habitat made of bare limestone. The surface was broken into the characteristic clints and grikes, the clints being slabs and the grikes fissures. Though there was a very small extent of limestone pavement, I could see the plants growing in the sheltered world of the grikes, just as they grow in the much larger pavement of the Burren in Ireland.

It was further on that we saw the herd of goats. Walking along the road that skirts the headland we peered over the wall and we saw them. They had found  a niche: clustered on the steep land that humans tread only in necessity they were in their element, munching the thistles, grass and other plants that grew there and regarding humans with imperious disdain.

The name Great Orme is not Welsh. As with several coastal locations in Britain the word is Scandinavian, meaning the Great Worm, on account of its shape. The Norse needed sailing directions  and they liked to name specific navigational features of various coasts, of which the Orme is one. The Welsh name is Gogarth, but don't ask me to translate it. My Welsh is limited.

There are features of historical interest. At the beginning of your walk is the tram station. The rail route up the Orme is a Victorian funicular tramway. This works by having trams going simultaneously down and up attached to a powerful steel cable. The gravitational pull of the downward tram pulls up the tram coming the opposite way, and extra power is provideded by a motor at the tram station. There are two of them beyond the starting point:half way up and the summit. At each there is a motor to provide extra pulling power. You change trams at the midpoint. Children love a ride on the tram, and they are great for elderly tourists. Further access to the summit is provided by  road that parallels the tram line, and there is also a cable car system, but this is sometimes shut down in windy weather.

On the way up you can visit the Bronze Age copper mines, which are preserved for public viewing. There are facilities for visitors. There is also a disused quarry near the summit whose limestone can be searched for fossils. In fact, the whole of the Orme contains fossiliferous limestone, and when walking this year I espied some crinoids, fossil dating from the Carboniferous period.

From part of the summit you can look down on Deganwy, where Maelgwyn of Gwynnedd once had his base. No trace of Maelgwyn remains now,but his memory lives on, and my mind rolled back to Jo Harrington's fine articles on the great warlord. You can see why he did not build on the summit: soil too shallow, and conditions too windy; so he sat nice and sheltered by the Orme itself.

Be aware, while the road to the summit is public, there is a toll road around the headland, but for walkers it is free. Maureen and I walked there,as we had left the car at the hotel, and we could look out over the Irish Sea. In the distance you see the impressive turbines of the Liverpool Bay Array. Despite what some people say, they do not spoil the view, but provide a focus in the blue distance. From the road you may be lucky enough to spy seals, but I have not seen them often. There are also cormorants, clustering on a flat rock above the sea.

As you can see from the picture there are facilities at the summit. There is a cafe where you can purchase meals, and to my daughter's delight, when we took her, ice cream.She was at that time no great fan of walking, but she loved ice cream. A walk,she was sure, should culminate in an ice cream shop.  In the cafe building there is a souvenir shop. The whole building used to be owned by the late boxer Randolph Turpin, until he tragically took his own life in the 1950s. A brave man, he had once risked his life unsuccessfully to attempt a rescue of a girl who had wandered onto the cliffs.

Further away there is another small shop, which I prefer, as it sells not only souvenirs but also some books. I once bought some wildflower seeds from there. This is not far above the tram terminus.

I first ascended the Orme when I was eight, and I have done it many a time in the fifty six years that have followed. It is a pleasant hill above a pleasant town, and it makes for walks that provide good exercise without being unnecessarily arduous. Great for young families, older folk and holiday makers seeking a relaxing day's walk.

[Photo at the top by Gail Johnson.]

Some good news about the Great Orme! One hundred and forty acres, the part known as Parc Farm, has been sold to the National Trust, an organization that preserves heritage sites. This area will be managed as one of Britain's most valuable botanical sites and as a place with an interesting archaeological heritage.

So lovely that you've trekked the Orme for so many decades, beginning at the age of 8. It's establishes a special closeness with nature to become familiar with particular landscapes over time.
Also such an enchanting opening: "There is a delight in the low hills." I'm pleasantly reminded of Lord Byron's observation in "Childe Harold's Pilgrimage": "There is a pleasure in the pathless woods."
I enjoyed the reference to your daughter's delight in ice cream at trail's end.

What a beautiful place to go for walking. Going for a walk with my husband and kids is one of my favourite things to do.

I was in Llandudno yesterday! We must have just missed each other. :(

It sounds as if you and your wife had a lovely hike.

Thanks. My wife and I love our walks there.

What a great article, there's a bit of everything in there! I haven't been there, but it's going on my list now. Thanks Frank. 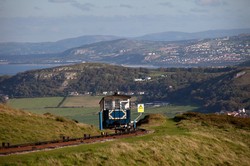