Walks for a Ruby Wedding

The English Lake District in a sunny April, on an Easter Weekend, is a lovely place for a celebration. During the first week after Lent we celebrated forty years of marriage. Maureen decided that she wanted us to visit the Lake District for a short stay. So we booked some overnight accommodation at a pleasant little guest house in Ambleside, a small Cumbrian town, and set off for our break, which we enjoyed greatly.

Picture by Shardy, from Pixabay

Having set off from Stretford, Greater Manchester at 8.30 am.we arrived at Elterwater ninety minutes later. The name belongs to a small village at the mouth of Langdale and to a small lake of the same name. As you drive the car into the village you come through a patch of very rough, hummocky ground, which I recognise as a glacial moraine from the  glacier which carved out Langdale. The rough ground is in contrast with the well-kept little village of Elterwater with its friendly, well-maintained faciities, where we were later to lunch.

The plan was to go to Elterwater before our accommodation and walk round the lake, enjoying the woods, water and quietness. We had chosen this walk because Langdale was the location of our first holiday together, but we had in the past concentrated our efforts on the more jagged, higher peaks  of the western part of the dale. With the mellowing of years comes the realisation that lower levels have their charms, especially flowers; and I have been carrying an injury to my lower back for quite some time, so some care is needed.

Having snacked at a cafe [bacon sandwich for me,  toasted teacake for her, with tea of course] we set off on a beautifully maintained path besides the river that flows from Elterwater down to Windermere. With the river to our right and fields of sheep yet to have their fleeces sheared, it was a typical Lake District stroll, done to the gentle trilling of the river.

Soon we reached wood-clad Elterwater, whose name in the Norse-based old Cumbrian dialect means Swan Lake. There must have been swans there for the Norse to give the lake this name, but we saw none. But the woods have their enchantment.The bright  yellow of dandelions  was supplemented by the yellow of their near relatives hawkweed. But the riverside and lakeside woods were filled with the small white flower heads of  wood anemones, which were gloriously abundant among the trees. The daffodils which are prolific in this territory so familiar to the poet Wordsworth, were already past their prime and were fading, but in succession the woodland glades luxuriated in bluebells, the genuine English bluebell rather than the invasive Spanish bluebell and its hybrids.

The woods contained a variety of trees. Silver birch and hazel were richly present, and the white blossom of elderflower blessed the trees with the promise of berries to come. Willows hung over the lake, enjoying the wet environment. Yet the river held in its grip a small tree roots and all, as if to remind us of the winter storms that beset Northern England. The woodland looked like an old wood to me,for I could spot the multiple stems that come from stumps that have been coppiced, an ancient practice only just coming back into fashion.

Peering through the trees we espied a cluster of ducks on the lake,one of which was a female goosander, a red beaked species that I have not  seen before.

We walked all the way around Elterwater, the first time that I have paid this small watery gem as much attention as it deserves.

The Rest of the Day.

As it was a celebration we lunched well, choosing the Brittania Inn, a hostelry with oak wood beams that dates back over four hundred years. As the seats outside were taken up by walkers and tourists enjoying the sun we sat indoors under oak beams and enjoyed a good plate of locally produced meat on burgers.

Then we set off for the afternoon's walking. This time we kept to the road, a peaceful minor thoroughfare heading for the hillside village of Chapel Stile, which we did not reach, it was too far.Apart from a few cars and athletic young people whizzing along on mountain bikes the road was peaceful and safe, and we walked between farm land to our left and woodland to our right.

Besides the traditional Cumbrian dry stone walls, made without mortar and held together by weight, all beautifully constructed, the farmers had doubled their field defences by making traditional hedges on the roadside These are not just bushes, but are woven according to a pattern. The hedgelayer gets a billhook, a short slashing tool, and cuts half through a young slender trunk. Then he plants poles into the ground on the stretch of hedge that he is laying. The next step is to bend over the half cut trunks until they are horizontal and then weave the "pleached" [half cut] trunks into the poles. This is done with the pleached trunks in layers, one above the other. The half-severed trunks continue to grow,  thicken and harden,making a solid unbreakable cross between a hedge and a fence. I have given a rough idea of how the job is done,but each area of Britain has its own style. There is even a hedgelaying championship,often hosted by Prince Charles at his estate at Highgrove in southern England.

After turning round we diverted through the woods to reach Colwith Force, [force means waterfall in local dialect.] The woods were easy walking, however  we could only view the cascade from the top of what could only be called a ravine. There was access from the other side down a steep set of steps firmly affixed to the rocky walls, but when I looked across the ravine I had the feeling that the opposite side was a piece of land rarely  trodden  by humans.  But the view was enough.

We returned to Elterwater, retrieved the car and set off for Lacet house,where we were to stay the night.

We had the morning in Grasmere, a beautiful village named after the lake that exudes an atmosphere of civility, culture and good grace. It is as though the spirit of the poet Wordsworth hovers over the village in which he chose to reside like  patron saint or tutellary deity. We had driven north from Ambleside, four miles to be precise and found a good parking spot near to the village entrance.

The walk took us southwards along the road past Dove Cottage, now a museum celebrating Wordsworth. Grasmere was on our right, but here the shore is thin and scrubbily wooded, besides being private land. But at the southern end a path turns long the lake shore taking us through the shady White Moss Woods, spacious walking territory with mature trees and little scrubland. We saw one large, venerable tree of sizable girth, denoting that it had long been a-growing, and I wondered whether Wordsworth had been alive when it was a sapling.

We tried to stay close to Grasmere's shore until we ran into a patch of bogland and were forced to take another route slightly inland. We had found the right path, as it took us over the boggy area on well-constructed wooden walkways. At this point the woodlands become denser and they are wilder than the parts of the wood near the road. Turning north we walked on the gravelly beach until we reached a clear path that  was to take us northwards to Grasmere village. We walked through pleasant woodland and farmland until we met the road. By this time, though, I was feeling my injury.  It does not incapacitate me, but I had to take a couple of short rests,but we got back to the village without incident.

We quickly found a cafe and got some tea. I tried a flavour new to me, Lakeland blend, blended from high quality teas by tea experts for Lakeland water. It was delicious. Then we had  lunch sitting in the park.The short break came to an end and we found our way back to the car park. On the way home I made my plans for today's allotment  work, which involved some lifting as I was to clear a greenhouse. It was done successfully this morning.

I was not aware that toasted tea cakes were known as English muffins.In England usage varies, but teacakes are muffins with fruit in them. Muffins have no fruit, but in some areas are known as baps and in the North West barms or barm cakes, though this usage is fading out.

I cannot give you any more information on Lakeland blend than I have given. Sorry!

Water shortages are likely to hit the south east of Britain, but northwest of the Tees-Exe line [an imaginary line running from the river Exe in the South West to the river Tees in north East England,] which is roughly the division between highland Britain and lowland we will get enough water, but with stormier winters. In my area allotments will be safe.

frankbeswick, Thank you for the explanation of hedge-laying; foray among bluebells (Virginia, not English or Spanish, here), daffodils, dandelions, elderflowers, hawkweed and wood anemone; and the products.
Are toasted teacakes what this side of the pond calls English muffins?
What are the Lakeland tea blends? Bing-ing, Google-ing and Yahoo-ing just gave me Farrers and Penningtons tea merchants without other than general identification of Sri Lanka by the former and "the finest Indian, Sri Lankan and African teas" by the latter. The former and latter respectively indicate that "Our own blend of the quality Ceylon teas specially blended to compliment the Lakeland 'soft' water" and "Our Lakeland tea is suited to both hard and soft water areas."
In another but somewhat related direction, I remember reading about a U.K.-based report about scaling back on water use within the next decade or two. How would that affect allotments?

You have some interesting terrain.

I know his cottage in Grasmere, but I did not know that he had a cottage in nearby Rydal.

we are hoping to do Wordsworth's cottage at Rydal in October too.

Excellent. We are going to the lake District for our 40th anniversary in October.

I don't know Elterwater so this is of great interest to me .

Congratulations to a gorgeous couple and see you soon. 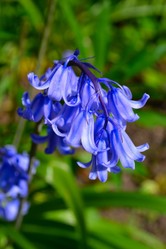 Reflections on the Monarch's Death17 days ago

Walking the Great Glen23 days ago