The question about what defines an official peak has plagued mountaineers for years. This article explains objective measurements and discusses when a peak is climbed. 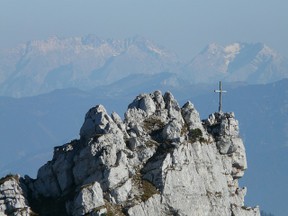 Several lists of 4000 meter peaks in the European Alps vary from around 50 peaks to over 100. Traditional lists have included and dropped off summits lots of times. The question about what constitutes an official peak has always been based on a healthy degree of emotionalism. In newer time a growing community of climbers, mountain enthusiasts and mathematicians recognized that summits can be measured objectively by their elevation relative to the surrounding terrain defined by their topographic isolation (dominance) and it's topographic prominence (relative height).

Lhotse, the closest 8000 meter peak to Mount Everest, has - with 610 metres - the smallest topographic prominence of any official eight-thousander. With a height of 8,516 metres, the mountain is connected to Mount Everest via the South Col (7,906 metres).

However, there are still a lot of misleading and incorrect elevation data related with problems measuring the exact height of a peak or determining its correct position.

The elevation of 8,848 m of Mount Everest was first determined by an Indian survey in 1955 and reaffirmed by a 1975 Chinese measurement. In both cases the snow cap, not the rock head, was measured. In May 1999 an American Everest Expedition, directed by Bradford Washburn, anchored a GPS unit into the highest bedrock at an elevation of 8,850 m. Although it has not been officially recognized by Nepal, this figure is widely quoted, but geoid uncertainty casts doubt upon the accuracy claimed by both the 1999 and 2005 surveys.

Additionally the definition of mountain ranges and related peaks is a neverending discussion.

The list of Alpine four-thousanders, defined by the UIAA and published in 1994, contains 82 official summits of 4,000 m or higher and includes 30 lesser summits - so called subsidary peaks. Based on a prominence of 100 m the list would contain 52 mountains.

Other presented lists of highest peaks are also not exhaustive and include subpeaks disregarding the prominence criteria. At the moment peak lists expand common mountain lists and include complete mountain ranges with a lot of several peaks to climb. An example is the Annapurna massiv where every single peak is a mountaineering challenge with its own risks and specific characteristics. Therefore a goal for the future could be to redefine old peak lists and point out corresponding parent peaks and main summits.

Another interesting question is when a peak is really climbed? Do you have to climb from sea level or can you use a cablecar and walk the last 100 metres? Both answers do not satisfy most of the mountaineers. An obvious answer would be, that you must climb a mountain from the bottom to the top. But although the top of most mountains is well defined, the bottom is not. And often you can't even stand on the highest point of a mountain because of snow cornices or other circumstances.

Because of these reasons it is very difficult to find an obvious answer and we can be curious what the future will bring. Interested people can follow the discussion which woman was the first one who has climbed all 8000 metres peaks:

On April 27, 2010 Oh Eun-Sun claimed that she had climbed all fourteen eight-thousanders, which would have made her the first woman to achieve this feat, but her claim to have ascended Kangchenjunga was disputed by multiple experts. One of her Sherpas, Dawa Wangchuk, later admitted that the group stopped about 150 meters below the Kangchenjunga summit because of high winds and poor visibility, and the Korean Alpine Federation ruled that she did not climb that peak.

Oh Eun-Sun later admitted that she had to stop a few meters below the Kangchenjunga summit, and therefore the renowned mountaineering site ExplorersWeb considered on December 10, 2010 that Edurne Pasaban is the first woman that has climbed all fourteen peaks.

Hi MIaden,
I think that's interesting people who climb high mountains and like records or for people who like statistics.
Cheers, Hans

I never asked myself this question about peaks. But it is good to know these things. But I love my valley and I tend to stay there, though my country is mountainous with lots of nice rocks to climb on. At least that is what I was told by my friend who is mountaineer.
Cheers!

Thats great :-) I have not even climbed the peak of the Hochries.

Hi Sonja,
that's right :-) On the first picture you can see the Wendelstein. We made the tour in late september.
Regards, Hans

When is a peak climbed... very good question. I think, it`s no valid by using a cable car. :-P
The first picture: Does it show the Wendelstein? I see it every day, but from another distance.

Hello mivvy,
thanks for your comment :-) I think the highest point in your country is the Vaalserberg which is also the location of the tripoint between Germany, Belgium and the Netherlands. It's height ist 322 meters and therefore you are right: all peaks are mountains :-)
Regards, Hans

What a lovely title. All peaks are mountains to me (no wonder because I live in the Netherlands)

What a shame for Eun-Sun to have come so close to that one peak, having ascended all the others, but still to lose out. I admire the mountaineers of the past who had little in the way of equipment and wore ordinary clothing, and yet still scaled peaks that are considered a challenge today.

Uahhhhh! If I earn enough money I invite you to a 2 week trip through the european alps - by foot!

I'll wait til they have a cable car up the Mount Everest, hopefully with a smoking section.

This article lists the highest mountains of the world and some of their promi... 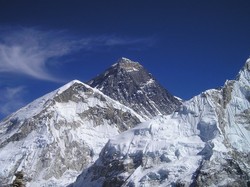 This article lists the highest mountains of the world and some of their prominent subpeaks.
69%  7   7 Hans
Mountains

In the web exist several pages listing the wellknown fourteen 8000m peaks - the highest mountains of the world! But what is with their subpeaks and subsidiary summits?
Loading ...
Error!