What is Metatarsalgia - Diagnosis and Treatment

Metatarsalgia is a symptom of pain in the forefoot. It is essentially pain and tenderness of the plantar heads of the metatarsal bones that bear a disproportionate amount of the ..

Metatarsalgia is a symptom of pain in the forefoot. It is essentially pain and tenderness of the plantar heads of the metatarsal bones that bear a disproportionate amount of the body weight.

In normal gait, at “heel strike,” the moment of ground contact that ends the swing phase and begins the stance phase, the foot is inverted due to anterior tibial muscle function. As the foot progresses through the stance phase, the weight bearing progresses along the outer aspect of the foot and gradually across the metatarsal heads until the last phase of stance, when the foot pronates due to the weight-bearing torque of tibial internal torsion. In static stance, the first metatarsal carries two sixths of the body weight and the others one sixth each. In a pronated or “splayed” foot, the balance is upset. The transverse arch depresses and greater weight is borne on the second, third, and fourth metatarsal heads. The interosseous ligaments that support the arch are stretched, permitting the forefoot to broaden and “splay'” out.

Secondary metatarsalgia may result from

Metatarsalgia is common in the middle aged who have a pronation tendency and most common after a weight gain. This combination and increasing sedentary existence, increases symptomatology. Internal tibial torsion or knock-knees can increase the pronation of the foot. A “toe-out” gait increases pronation.

The pronated foot is a loose packed articular forefoot in that all the joints are incongruous and the articulations widened to permit the foot to splay (spread). This also permits the transverse metatarsal head arch to float. This causes a wider print of the wet foot upon absorbing paper, as the arch depresses in the same manner as flatfoot.

As the foot everts, from whatever causes the anterior tibialis muscle that inverts (supinates), the foot is less efficient. The toe extensors now are in direct alignment of the foot and function more to dorsiflex the foot. This further everts the foot, and simultaneously dorsiflexes (extends) the proximal phalanges. The extended proximal phalanx further exposes the metatarsal heads to excessive depression and weight bearing.

Metatarsalgia, caused by a depressed transverse arch is treated by elevating the middle portion of the arch, which avoids pressure on the painful metatarsal heads. All the aspects of treating the pronated foot must be utilized including exercises to strengthen the intrinsic muscles, Achilles tendon stretching, improvement of gait, weight reduction, and the use of appliances such as the Thomas heel, the inner heel wedge, and the metatarsal pad.

The metatarsal pad must be placed behind the metatarsal heads to relieve the pressure on them. If it is placed under the heads, a frequent error made by the orthotist or shoe repairman, the condition will be aggravated. Calluses must be treated by soaking the foot in warm water and then using a stone or emery board. However, to administer all these ancillary forms of treatment and not correct the abnormal mechanics of the foot is to invite recurrence. 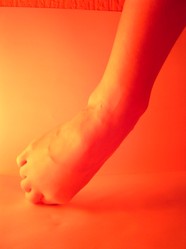