What Would Have Happened If the Battle of Bosworth Was Written by Disney?

On August 22, 1485 Richard III died at the Battle of Bosworth. But what if this was a Disney story? What would the outcome have been then?

August 22, 1485 is the date that everyone knows as the Battle of Bosworth. King Richard III went to war against Henry Tudor and died. After that, propaganda spread that Richard was a hunchback and evil man. He was blamed over and over again for the disappearances (and deaths) of his nephews despite no evidence to support it.

However, what if it was all a Disney movie? Some of this inspiration comes from The White Queen, but I do want to explore the idea further. Just how would the Battle of Bosworth ended had Disney created the whole story?

Would King Richard III Have Been the Villain?

The initial part really depends on whether Richard III was the good or bad guy. What do you think?

Before thinking about the war, it’s worth thinking about whether King Richard III would have been the good or the bad guy. There is one reason to make him the bad guy: his possible involvement in the disappearances of the Princes in the Tower. But what if he had nothing to do with that? What if it was someone like Margaret Beaufort or even Henry Tudor himself (somehow—I’ve not thought everything through yet).

Take out his involvement in the Princes in the Tower and King Richard III could have been the good guy. He stepped up to the throne when there was no-one else. He tried to make peace with his sister-in-law Elizabeth Woodville and gave his niece Elizabeth of York a place at court.

That would make Henry Tudor the villain.

Henry Tudor as a Villain

Having fun with Henry VII being the bad guy in a Disney movie.

Maybe Henry wouldn’t quite be the villain. I’m taking some inspiration from Dreamworks' Skrek here and making him a mommy’s boy. Someone who has Margaret Beaufort doing it all for him. After all, she certainly did do a lot for him. Of course, in history she had no choice. Henry had been exiled by the time of the Battle of Bosworth, so she needed to do something to get her son on the throne.

While in France, Henry was gathering an army to bring back to England. I could see him communicating with his mother and she tells him just how to do it. In fact, bring in Jasper Tudor and the two of them are conspiring together to make the Battle of Bosworth happen. The other option is that Margaret as Jasper around her little finger and he does everything that she tells him to.

I'm chuckling to myself as I write this, envisioning Henry Tudor as a spoiled brat who can't do anything for himself. If you've seen Shrek 2, think of Prince Charming and you'll get my idea for him.

The Ending at the Battle of Bosworth

Just how would Disney have ended this movie? Would it have had the same outcome?

Finally, we get to the end. The final scene is the big fight. But who will win?

Since this is a Disney movie, it would have to be the good guy. After all, evil must be vanquished. During the war, Henry’s step-father decides to remain loyal to his king—he is a good king after all in this. Henry’s army is defeated and Henry dies on the battlefield. King Richard III is victorious.

The True Story of the Battle of Bosworth

The Battle of Bosworth - An Event Which Changed the Course of British History
Bosworth was the final clash in the Wars of the Roses. It marked the end of the Middle Ages and gave rise to the Tudors.

What about Margaret Beaufort? I don’t think she’d be killed off. Looking back at Cinderella, the ugly stepsisters were never killed off. But she would be left unhappy. Her son is gone and her husband betrayed her by standing up for Richard III. She would be locked away in the Tower, and I’m sure that would open the door for another movie at some point as she plots her revenge. Maybe in that one she meets her demise.

But What About Anne Neville?

There is one character that I have forgotten about throughout all this. Anne Neville; the Kingmaker’s daughter. What could possibly happen to her?

Disney has sadness during movies. Characters die to help keep the plot going and to give the eventual hero something worth fighting for. I could see Anne’s death helping him with that. She may even give him her blessing to remarry—even suggesting Elizabeth of York.

That would open up the very final scene being Richard III’s marriage to Elizabeth of York. She finally becomes Queen Consort of England and we see her mother watching her with pride.

Disney movies always have a happy ending, so there is no way that Henry Tudor could have won. He was the usurper after all. Of course, this would depend on whether Richard III had anything to do with the Princes in the Tower or not. If Disney decided not to, then he would have been the good guy—the one with the white hat (the white rose...).

What do you think? What’s your storyline if Disney did the Battle of Bosworth?

What a fascinating way of thinking about this! Oh please do a Perkin Warwick version! I seem to recall being taught that he was a villain but I'm not so sure that's the case. It's a fascinating period in history.

I love that idea about the Princes in the Tower being locked up really. Glad you enjoyed it. Like I said to Liz, I have a few of these ideas so I may put them up here. I never really thought anyone would get that much entertainment out of my random ideas like this. Oh and when it comes to these, I do leave most of the humanitarian and politic issues out of it. I let my muse have some fun.

If this was a Disney story, then we finally know what happened to the Princes in the Tower. They would have been locked up in a sweat shop making Battle of Bosworth toys and novelty Princess Anne Neville costumes.

Politics and humanitarian issues aside, I was giggling all of the way through your article. Having just been at the Battle of Bosworth reenactment (last weekend), I can picture only too well what this would look like via Disney.

I've got Margaret Beaufort as a tall, thin lady, all in black, with spidery fingers and purple eye-shadow. Henry Tudor all bumbling, idiotic, but still shady. Richard III bursting into song, surrounded by blue tweetie birds on the morning of Bosworth. Lord Stanley would be fat, and constantly in shining armour with the visor up. As for Anne, she's the princess! She can't die! Richard would kiss her or something and she'd come back to life.

And she'd have a lovely dress, all crinoline and sparkling - like was never, ever worn in history by anyone ever - but will look fabulous on a three year old. Just as soon as the Princes in the Tower have finished stitching it together.

Liz I think that would definitely be a different Disney plot. I have a few of these Disney movie plots running around my head. I'll see what I can come up with on the Perkin Warbeck/Prince Richard idea for you, if you'd like.

There are some fascinating ideas here. My particular interest is in Perkin Warbeck and whether he was really Prince Richard. I guess that is a wholely different plot for Disney to follow.

I deeply resent the dissolution of the monasteries, so Henry is not in my list of heroes.

I do wonder whether the reformation would have taken place anyway. It was spreading across Europe during Henry VIII's reign after all. It would have probably happened in a very different way but possibly still happened none the less.

I don't really see it as the wrong side winning to be honest. Henry VII and Richard III had their pros and cons.

Thanks for your thoughts, Frank.

Henry's barbarities in Scotland at the Rough Wooing would not have taken place. The barbaric massacres of Northern English at the Pilgrimage of Grace would not have occurred. The Spanish Armada, which was an anti-Tudor move, would not have been launched.

This is not to say that all would have been a bed of roses. It is easy to say what would not have happened, but we cannot say what would.

Why did the wrong side win the battle of Bosworth? 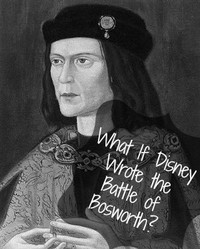