A variety of Catholic customized refrigerator magnets are available online. Here is where to find them.

You probably had no idea that a wide variety of Catholic refrigerator magnets exist. Neither did I, until I started investigating.

These items are created by Zazzle, an online store that specializes in custom gift products. Just about any sort of design, for any taste, can be found there. So it's only natural that someone would make refrigerator magnets in hopes that some of the world's 1.2 billion Catholics would like them.

You'll find a variety of magnets that feature pictures of Our Blessed Mother, the saints and the angels. You'll also find magnets that show the Vatican, as well as many of the more famous shrines and basilicas.

Our Lady of Guadalupe Refrigerator Magnet

Our Lady of Guadalupe is very popular throughout Mexico because her appearance, in 1531, resulted in the conversion of countless Native Americans. Prior to that, Spanish settlers were not successful in their efforts to spread Catholicism, as it's widely documented they mistreated some of these indigenous people.

When a peasant named Juan Diego, one of the few converts, received an apparition on his way to Mass, he encountered disbelief. However, all doubts were erased when this Heavenly creature also provided a clear sign that he was telling the truth. Juan was able to show his bishop some beautiful roses he had just picked, and these clearly didn't grow in the region in the middle of winter. Our Lady of Guadalupe also left an imprint of herself on his cloak, or tilma, which is still on display in a Mexican City basilica dedicated to Our Lady, under this title.

Our Lady of Guadalupe Talks to Juan Diego

Catholics consider Saint Michael the Archangel as a very powerful patron and protector of the Church. They typically call upon him whenever they sense danger or temptation. The Saint Michael prayer, shown below on the right, is considered an effective remedy against demonic infestation, and is often used as an unofficial exorcism prayer.

The name Michael means "Who is like God." It is believed Saint Michael battled the forces of darkness when the bad angels revolved against God in Heaven.

Our Lady of Lourdes Refrigerator Magnet

Lourdes, France is the most popular Catholic pilgrimage site on the European continent. Because throngs travel here every year, many of them desperately ill, medical personnel and an army of volunteers are stationed at the shrine to help them.

This devotion has its roots in a Church-approved apparition of Our Blessed Mother to a teenager now known as Saint Bernadette. Her real name was Bernadette Soubirous and she lived with her parents and siblings in very modest circumstances.

One day, when she was out collecting wood for the family's fireplace, she was greeted by a beautiful woman dressed in a radiant white dress, who told her she was the Immaculate Conception, a title Catholics often use to refer to Mary, the Mother of God.

At her instruction, Bernadette was to dig in a certain spot. At first, though, it appeared as if nothing happened, and all of this was just a figment of Bernadette's imagination.

However, a trickle of water began to grow in to a spring. This water is widely claimed to have healing powers. Dozens of miraculous recoveries have been documented. These have been verified by a medical team that includes members of other faiths, as well as atheists.

The Vatican City is the official seat of the Catholic Church, and is home to about 900 priests, bishops, cardinals, staff members, as well as the Pope. The current Pope is Francis, which makes him the 266th leader of the Church. The very first Pope was Saint Peter, one of the Apostles. The main courtyard, known as St. Peter's Square, is named after him.

An independent "city-state" located within the confines of Rome. At only 110 acres, it is very small in land area.

Millions of tourists come each year to attend Mass celebrated by the Pope and to tour St. Peter's Basilica, also named after the first Pope. Completed in 1626, this is a lovely example of Renaissance architecture.

These are really pretty. 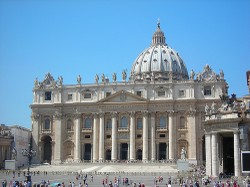