Who Was Robin Hood?

England's legendary folk hero was a historical character, but he came to a bad end.

As children we came home from school and watched television, and one of our favourites was Robin Hood. We revelled in his conflict with the evil sheriff of Nottingham and we took seriously the lyrics of the theme tune, "feared by the bad, loved by the good." The Robin that we watched was ever loyal to the king, Richard that was. But recent research into England's folk hero has revealed a different story, and it ended badly for Robin.

Imagine  the scene. A Plantagenet king in a bad mood was not to be messed with, and Henry the Third, by no means a bad king, had been messed with. Some time in the 1230s, if Dr David Crook is correct, Henry was busy raising taxes to pay for his  French wars, but some of the tax due had not arrived. The culprit, who had a record of at least twice failing to turn up when summonsed to Wakefield court [[in South Yorkshire, just north of Nottinghamshire, Robin Hood's haunt] was Robert of Wetherby, whose full name was Robert Hod.] Robin was always a nickname.

Well there are outlaws and greater outlaws, and then there was Robert Hood. David Crook reveals that there was only one recorded time when the king summonsed a posse with the intention of getting an outlaw, and this was it. This  was treatment reserved for rebels. Unlike the cowboy films, where the villain is wanted dead or alive, the  king wanted Robert Hood  dead. The posse would have contained large numbers of troops, knights, men at arms and archers, and was headed by the deputy sheriff of Nottingham, a man who had a longstanding problem with the notorious outlaw, whom he had never caught. David Crook thinks that Robin had robbed royal tax collectors. He had probably been doing as he pleased for years, but this time he had gone too far. Failure to pay is one thing, ambushing royal tax collectors is another.

Rob Hood was taking advantage of the wild lands of Sherwood Forest, which covered an expanse from North Nottinghamshire and into South Yorkshire, and it  is Sherwood with which he is most associated, but he has a link with Barnsdale Woods in South West Yorkshire too. Barnsdale was territory then wooded and still hilly. It is some distance south of Wetherby, now a quiet Yorkshire market town in the west of the county, but there was no reason for Robin not to be mobile, and he probably went where the money was.

David Crook reports that Robert of Wetherby was caught and beheaded. His headless body was hung in chains in public, a fate reserved for rebels, suggesting that he was  killed for challenging the king. A short time later an order sequestering the assets of Robert Hood was made. That there was no order for the assets of Robert of Wetherby indicates that Hood and Wetherby are one and the same character. What became of the merry men is unknown. Maid Marion is a later addition to  the tale, as is Friar Tuck.

This information comes from Robin Hood legend and reality, by David Crook.

Robin was dead, but his name lived on. Soon after the demise the name Rob Hood to denote a robber came into common parlance. Robin's fame had spread far and wide. He was a hero to the common people of England, Anglo-Saxons dominated by a Norman-French nobility. Within a few years of his demise a legend had sprung to life, a legend that was to survive into the modern period. Strangely, for a robber he is much loved. I had always thought that my childhood hero won every fight and died peacefully in bed rather than beheaded  and left to rot.

Robin left few written traces, merely court records, so official history, which is written by the winners, wrote him out of the story. But whispers cannot be stopped, and so in alehouses and cottages peasants spoke of the robber who was more than robber, one who robbed the rich and helped the poor, the man who had the courage to stand up to the establishment that seemed invincible. Robin  is loved by more people than dislike him. Maid Marion is much loved, and we all have a soft spot for the Merry Men.

A ballad tradition developed. This was a form of folk history. in the ballads Robin always comes off best in conflicts with establishment figures, and moreover, Robin's death is never mentioned. Like King Arthur Robin is a living figure in the popular imagination. An executed Robin would have been a defeat for the common folk. It was through the ballads that Robin was remembered, though the ballads themselves have been synthesised into fictitious lives. The trouble with folk history is that it lacks tight documentary analysis and checking of facts. The result is that there are at least thirteen Robin Hoods, all of whose stories have become merged with the tale of Robin of Wakefield/Wetherby. A separate Robin Hood tradition is found in South East England where Robinhood may well have been a surname, though not a common one.  Also blended with the tale is the image of Robin as  an archer, which owes its duration to the fact that the medieval English were skilled archers. Robin is the quintessential Englishman.

But without a doubt, the earliest of them all was Robin of Wakefield [who probably moved to Wetherby to escape the law.] There was a family surnamed Hood well-established in the south-west Yorkshire town of Wakefield, and the forename Robert was found among them. One  Robert Hood seems to have been a regular lawbreaker, so it is most likely that he is the true Robin.

A Fighter for the People

One element of the legend which we could do without is that Robin  was the outlawed Earl of Huntingdon, a legend that was attached to another outlaw of Robin's time, Robin of Loxley. The Hood family had no connection with Huntingdon, which is in Eastern England, but the legend serves to conscript Robin into the establishment. It works to tame a rebel's reputation. The legend that he was loyal to good king Richard is another element in this establishment hijacking of Robin. The English people had no love for Richard, a warmonger who spent only ten months in England.  Richard is an unwanted intrusion into a popular legend,  and Robin would not have loved him.

Maybe Robin, the robber who was more than robber, was a resistance fighter against the Norman establishment, a leader of a band who were unwilling to accept subordination. Court records mention a Robert Hood who was fined for refusing to turn up to fight for the king, hardly a sign that he was very loyal. In legend Robin hunts and eats the king's deer, breaking forest laws. Disrespectful to authority certainly! A Robert Hood was outlawed at York court and had assets seized. This was before he was hunted down. We get a picture of a man , probably a landowner in his early years, who was not always an outlaw, but who was on a collision course with the authorities, a path that led him further into trouble with the law  and into popularity with the common folk who regarded him as one who would resist what was known until the seventeenth century as the Norman Yoke. His was a failed cause, but though he failed in his life his name lived on in the minds of the common people, while those who hunted him down are long-forgotten or known only to specialist historians, they are facts not legends, people whose stories do not inspire.

Robin is a reminder that alongside conventional history there is another history, the history of those who do not belong to the ruling classes. Disobedience and dissent. Is it any wonder that the establishment tried to co-opt his memory?

I am an Amazon associate and I earn income from qualifying purchases on this page.

Friars are like monks, but active for the people. Franciscans [for the poor] Dominicans [intellectual] and Carmelites are still around today.

frankbeswick, Thank you for the practical information and the product line.
Did they display Robin's head or was it just the chained, headless body? What do they do with what's left once they feel that they have made their point?
It's impressive the sources you must have gone through to cover all the bases for Robin Hood contenders.
You mention King Arthur, so I'm wondering what with your DVD product lines and with his legend of the sword release, whether Guy Ritchie might not at some point tackle RH.
You say below, among the preceding comments that "Friar Tuck is a member of a religious movement that was for the poor. They were newcomers to England in Robin Hood's time, though by 1230 they were present in York, so Robin might have met them." What was the name of that religious movement that cared about the poor, and would it still be around today?

Robin of Loxley was not the original Robin Hood, but his story has become merged with the Robert Hood legend.

The ballad of Robin Hood and Alan a Dale shows a Robin who has no time for religious authorities, as he authorises Little John [his giant follower] to take a bishop's robe and conduct the wedding of Alan and his girlfriend, who was due to be forcibly married to an elderly Norman. Forced marriages of Saxon heiresses to Normans was a policy instituted by King John to unify the ruling class. In this tale we see Robin as anti-Norman and rejecting of all the established system of authority, ,yet supportive of wronged commoners.

Friar Tuck is a member of a religious movement that was for the poor. They were newcomers to England in Robin Hood's time, though by 1230 they were present in York, so Robin might have met them.

Also, Charles Stuart was from a Scottish family, not English.

Richard the Lionheart was a very unpopular king who squeezed every penny from the people for his war campaigns. He was hardly ever in England.

Robin of Loxley belonged to a Saxon family who had some generations previously been non-hereditary earls of Huntingdon. He was from Staffordshire.

I believe Richard, a Plantagenet, would have been Norman, not a well-liked person.

In the American version Robin is often referred to as Robin of Loxley. I have had the idea we cannot really know who was the real Robin Hood.

The fact Robin was possibly an Earl left me with our meager British history being taught to associate him with Bonnie Prince Charley, but as you point out, he was an Englishman, and Prince Charley not so.

An outstanding piece Frank, which gives a truly balanced account.
Ty .
And of course ...we have Wetherby ancestors , you and I. :) 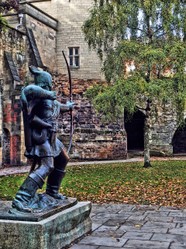 The Original Name of God13 days ago

The Christian Teaching on the Holy Spirit25 days ago