Why I Decided to Become a Freelance Writer

Ever wondered why people choose the jobs they do? Here's why I decided to become a freelance writer back in 2010.

The year was 2009, and I was looking for something to do with myself after university. Plans with the military were looking slim after a broken wrist that went undiagnosed and didn’t heal properly. My husband, who was just my boyfriend at the time, suggested that I did something with my writing. And you know what? I put it off.

I went for a different career path...so wait, why did I decide to become a freelance writer. What took me from that moment to this moment right now?

The Move from Birmingham to Dundee

Finding a job wasn’t exactly easy back in 2010.

In 2008, Britain hit the worst recession for a long time. I didn’t think much of it at first. I was doing a tech degree and had a stable job with the military. Sandhurst was the definite next step after I graduated in July 2009. That was until an undiagnosed broken wrist put a stop to that. Sandhurst told me that I would have to wait at least a year.

I needed a job.

That still wasn’t too bad. There were tech companies hiring in the area, and I managed to scoop up a decent job in software testing quite quickly. But my boyfriend couldn’t find a job. He didn’t have a tech degree and there were no companies even like McDonalds hiring. The only place he could get a job was by going back home to Dundee.

So, I decided to move up there with him. We packed our belongings into my Vauxhall Astra and off up the M6 and across the M8 we went. ‘It will be fine,’ I kept telling myself, ‘There are plenty of tech companies up there that’ll be hiring.’

The recession was just hitting Dundee hard by this point in 2010, and all the tech firms were closing or couldn’t hire anyone at the time. I was unemployed, in a city I didn’t know and had a handful of options available.

Use Amazon to Help Break Into a Freelance Writing Career

Instead of full-time work, I was stuck with part-time work in a dead-end job. A change was needed.

I started out taking part-time work at Specsavers where my boyfriend worked, while I found something more permanent. But there was nothing. It was depressing and my boyfriend suggested again that I look at writing. Surely there was a way to bring in money with that, even if it was just doing something during my days off to get my novel out there.

So, I took a long look online. And you know what, there was a way! There were lots of options to become a freelance writer. It wasn’t exactly what I wanted to do at the time—I didn’t think so anyway. But it would bring in the money and would be so much better than working at Specsavers part-time.

I could become my own boss, and could dictate when I work. Sure, there was all the self-employment paperwork to sort out and it would make buying a house difficult, but the recession had already cause problems for some of that. We’d have time to build up the income, the savings and the documents at a later date.

I soon found a job that I loved and found so many reasons to love it even more.

To be honest, at first this was more of a way to tide us over. However, over time it became a job that I loved.

Creating articles on various topics was just as enjoyable as my fiction writing. I loved researching into people from history—a passion that I had for so long and could never do anything with. Learning about new topics and finding ways to make more money online was fun. It even meant I could go back to university part-time and learn a subject that was a passion for so long.

In 2011, we found out that we would have a little one on the way. Being a freelance writer offered us more benefits. I didn’t have to find childcare. I could work from home and raise our daughter at the same time. It really did become the best decision I could ever make at the time.

Do You Want to Become a Freelance Writer?

What are my recommendations for those wanting to become a freelance writer? Don't follow my path!

I wouldn’t recommend that anyone does it the way that we did. We had no savings to fall back on should freelance writing not work out, and there was no backup job or plan. It was a split decision because working part-time at Specsavers just wasn’t an option or enjoyable anymore.

If I could do it all over again, I’d keep working for a few months before even thinking about quitting. I’d build up some savings to fall back on should freelance writing not work out, and I’d build up my client base first.

But I don’t regret doing what I did. Quitting everything and only have my income from writing to fall back on gave me the push I needed to succeed. It wasn’t stress that I felt, but that knowledge that it was now or never. I had to succeed at this. It was the motivation to make sure I succeeded that I felt every day.

But I can deal with that pressure. Not everyone can.

So, that’s my story of how and why I became a freelance writer. While I’ve always loved writing, it wasn’t something I considered doing as a career. It was a spur of the moment decision, but definitely the best decision I have ever made.

I think that is excellent advice. :-)

I'd recommend building up something to fall back on, Telesto. It took me some time to get the point of us being able to live off my freelance income. Luckily, I started with enough time to be able to build it up by the time we needed it (when hubby decided to go back to uni).

Good on you for doing it. One of these days I will give up full-time work and write full-time.

Thanks everyone. It was a nerve-wracking thing to do, and something I don't recommend. But I think it was something I needed to do.

Sometimes the best way is just to jump in and don't look back. By cutting yourself off from a traditional job, you knew you had to make freelance writing work.

Good for you that you had the drive to make it by freelance writing. It is hard to make it but so rewarding when it works out. The job market here is about the same and has gotten steadily worse over the past few years.

I swore blind after my last shift at the local retail emporium that I would never work there again and that I would Make My Writing Do the Working. Ahem. Sound familiar?

The Difference Between An Amateur And Professional Writer Is O... 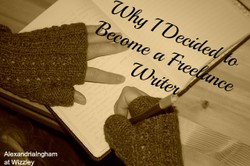 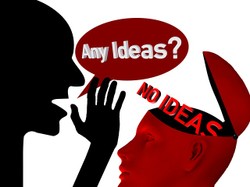 Running out of wring ideas? Here are six places to find them so you never get a blank page again.
77%  7   8 Jerrico_Usher
Freelance Writing 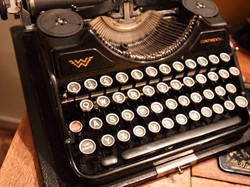 Professional writers come in all levels of writing (fiction, non-fiction, poetry, etc...) but unless you're being paid for your writing- you're not a "professional" writer...
Loading ...
Error!