A month ago I shaved my head to support cancer patients and raise money for Relay for Life. I donated my hair to Locks of Love and it felt amazing to give!

After my father was diagnosed with prostate cancer, my sister and I started a team for Relay for Life last year. We raised $600 and I decided that if we got $1000 this year, I would shave my head and donate my hair to Locks of Love. And that's exactly what I did. I shaved my head bald and the support I got was incredible. It felt so amazing to give but I had no idea just how much my self esteem would grow.

Shaving My Head Was Kind of AMAZING

Washing my hair in the shower, I try to think of how we can raise money for Relay for Life this year. Our team is pretty small and none of us have particularly useful fundraising skills. We're good at asking friends and co-workers for donations but nobody likes beggers so we limit ourselves. I remembered one year in Junior High when students got their hair cut for Locks of Love but how would that raise money? Then a little thought pops into my head...what if I shave my head for a price?

I'm not bold. I'm not brave. I don't do crazy things; I was that kid who corrected her teacher when she accidentally gave me more points than I earned because I was afraid she'd get mad at me for letting those two extra points slide. I'm the kind of person who overthinks and probably overreacts. However, when I told my family and friends of my head-shaving idea, they acted like I had just suggested jumping out of an airplane with no parachute. The comments I received were all in shock and full of phrases like "oh my God! But you're so pretty! Why would you shave your head?" I was never nearly as nervous as my mother and sister. It was just hair to me. I knew it would grow back. What I couldn't figure out was why nobody understood why I wanted to do it.

I wanted to show that I cared. Cancer has a nasty habit of running in my family and when my dad got diagnosed with cancer, there was nothing I could do but pray. Cutting my hair off wasn't much but it was more than I had done before. I also started going to an AMAZING Church and every Sunday they talk about the importance of giving. This was something I had to do.

Over the next two months, we raised money as we did before; selling baked goods at work and asking friends and family for money, but this time if they gave a little more, they had a chance of seeing me with a bald head. Surprisingly enough, this actually worked. Our boss donated half, which was an enormous help.

I don't want to sound self-righteous or toot my own horn for shaving my head because lets be honest: it really wasn't a big deal. It was a small action but it was done out of love and what I didn't expect was what I would feel afterwards.

On the day I had set to shave my head (6 days before Relay for Life and 7 days before my college graduation) my sister revealed to me that she had gotten in touch with our local news station and that they were going to meet us at the salon to record what I was doing. As stated above, I'm not bold. I'm not brave. I don't do crazy things, and I especially don't want to be on TV (unless we're talking an alternate reality where I'm tall, skinny, perfect, and written in as Brad Pitts true love in some semi cheesy RomCom- but I digress) I never wanted to be on TV or be interviewed. I had sudden flashbacks to every public speech I ever made in school; slurred speech, shaky voice, red cheeks, and hands so shaky you would think there was an earthquake were I'm standing. No, no, no. No interview for me. I wanted to physically hurt my sister but I restrained myself. As we sat in the car outside of the salon, I told her I needed a minute with God and she left so I could have a moment to pray. I prayed so hard for this to be a good thing and to not feel humiliated. My sister knocked on the car window, I took a deep breath, said Amen, and got out of the car and into the salon.

Never so quickly has prayer worked. We waited for a minutes for the news station to show and it was nothing like we pictured; no big lights and cameras in my face. It was just two girls asking me questions in front of a camera. For some reason, I didn't shake nor turn horribly red. I breezed through the interview part and then it was on to shaving my head. Everybody was watching and I was so nervous; not about my hair, I was super excited about that, but I was nervous that I'd do something to embarrass myself. But that didn't happen. My head was shaved in a matter of a few minutes and as I saw myself for the first time, I was in shock of how much I actually liked my new do'.

Shaving my head was liberating. I felt like I had done a little piece of good and it somehow gave me more confidence in myself than I'd ever had before. I've never felt more beautiful. The support I got afterwards- even from strangers, was more incredible than I could have imagined. It really hit me how one small move can have such an effect. One little act of kindness can go a long way and what a wonderful world we would live in if we all could act a little kinder.

Everyone should shave their head at least once- especially when its for a great cause.

Thank you. I'm very glad to hear it.

Thank you! My hair is growing back surprisingly fast. If it's long enough by this summer, I'll shave my head and donate my hair again.

Thank you sheilamarie! He was very proud. It was my sisters idea for us to start a Relay for Life team two years ago and he teared up over that. My whole family has been really wonderful in supporting him.

You are very brave and such a loving daughter! Your Dad must be proud of you! I'm glad he's okay.

You are very brave and such a loving daughter. Your Dad must be proud of you. I'm glad he's okay.

Thank you so much! He is doing well and cancer free (yay! knock on wood!)

This is really a special thing that you did, I will be sharing it because it's just so special. I hope all is well with your Dad.

I never thought I'd be able to do it either. A year before, I couldn't imagine doing it but it was really great. I thought I'd feel really self conscious but it had the opposite effect. It made my self esteem go up more than anything had before. It might seem scary but if you really want to do it, it'll be worth it and once the hair is gone, you won't feel so scared anymore.

I couldn't ever do it. I thought you had cancer, which was why you were bald. But good for you. I really enjoy your articles. Your a very good writer.

Well done. I contemplated this once, not so long ago, but you really did it. Well done.

Brandi Allen: a woman, a fighter, a would-be-mother at war with her own body ...

How to Starve Cancer: ...and Then Kill It With Ferroptosis
80%  3   17 KaitlynDeMetro
Female Reproductive Health 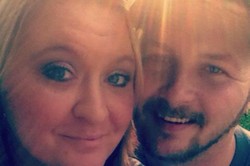 Brandi Allen: a woman, a fighter, a would-be-mother at war with her own body to have a child.
83%  4   20 TheWritingCowboy
Charities