YETI brand makes upscale coolers, ice chests, and insulated cups that hold up even in the hottest weather.

The YETI brand is well known where I live in Florida. Almost every time I leave my house I see a YETI cooler in the back of a pickup truck, or a travel cup in someone's hand. I'm sure that anyone living in a hot climate is familiar with the name.

Boaters and fishermen use the huge ice chests for offshore fishing and tournaments. But YETI makes smaller coolers too and even soft-sided insulated bags and a backpack. Honestly I didn't realize the scope of the items they offer.

YETI products are pricey and some of us have to choose a less expensive cooler. But for those who can afford these well-made products, there is a lot to choose from.

Have you heard of the YETI brand?

While living in New England I had not heard of YETI products.  The reason could have been that I had little need to keep things cool.

Once I moved to Florida, although the brand is very expensive, I saw YETI products everywhere.  From huge boat coolers to travel cups, everyone had a YETI something.

Yeti was begun by two brothers in 2006.  The guys were tired of having problems with coolers that were not made well and decided to do something about it.  And they did... in a big way!

Not only did they make coolers, they made super coolers!  Boaters will use them to stand on while fishing to get a better view of the water and better angle to cast for fish.  The larger YETI coolers can be used to store those big fish once they are caught.

For fish storage you may need a YETI Tundra like the one below.  According to the Yeti website, the Tundra coolers are manufactured both in the USA and Philippines.

Large coolers for deep sea fishing and storing the catch.

This is one mega-cooler if you are looking for such a thing.

The largest YETI cooler is the Tundra 350 with 19,000 cubic inches of capacity and a length of 63 inches!

Large fishing boats can add this to their vessel and fill it with the days catch of dolphin, cobia, snapper or whatever you wish to serve up for dinner!

Don't need such a huge cooler?  The Tundra comes in many sizes.

The Tundra 45 holds 45 quarts and comes with a dry basket which hangs above the ice area.

Coolers For the Back of The Car - The Roadie

Keeping a cooler in the trunk of the car or bed of the truck comes naturally to those of us who live in a hot climate.  Just getting frozen food home from the grocery store in the middle of summer can be tricky.

A truck bed can accommodate a large cooler, but something smaller is needed for the car.  The Roadie cooler by YETI comes in pretty colors, but it may be too small for a load of cold groceries, but perfect for a beach trip!  The Tundra is a bit larger.

I also like the idea of a small, manageable cooler for myself.  Often I will head over to the beach and need something to keep my drinks and snacks cold without being too heavy to carry.

For those who don't need a big expensive cooler, the Yeti brand cups and travel mugs are awesome as well.

Keep your beer or soda cold, and keep your coffee or tea hot.  Seafoam green is our color of choice because it closely matches the color of our flats boat.

YETI Rambler Drinkware in Seafoam and Other Colors

Cups and mugs will keep drinks hot or cold. The Rambler drink ware is manufactured in China.

The Hopper coolers are manufactured in China.

The Hopper Flip has a zip top that flips open.  It comes in various sizes including a small, 8-can size.

The Hopper Two has a bag shape with straight across zipper at the top.

The Hopper Backflip is a backpack.

The material is waterproof, and is mildew resistant.   YETI says their zipper technology is, "The toughest, highest-performing waterproof and leakproof cooler zipper in the world."

The Hopper comes in a variety of sizes, colors and styles.

Which works best, Bags of Ice or Reusable Ice Packs?

Honestly we use both, the bags of ice and reusable ice packs.  Our food and drink cooler doubles as a seat on our Hewes Redfisher flats boat.  We use bagged ice usually, but also have the Cooler Shock ice packs (link below) which work very well.

Both types of "ice" have their pros and cons.  Bagged ice is a recurring cost and means a stop has to be made just before going out boating.  It may not last as long as a good ice pack.

Ice packs work really well and remove the "digging through the ice" to find something.  Storing them frozen means they will take up space in a home freezer.

It's a matter of preference for food storage, but when filling a live well for catching fish, ice is the way to go.

This is not a Yeti product, but I have used the Cooler Shock ice packs here in Florida with fantastic results.

My Final Word About YETI

Yeti products work very well.  Here in the very hot climate of Florida a decent cooler is needed.  Many fishermen live here and visit and when you are out all day long in the heat, a good, dependable cooler and cooling cup is essential.  I can attest to needing cool water while out in the sun all day long on a boat.  And the fish we catch must stay cool as well.  Our boat has a live well we fill with ice, but boats using coolers need them to be of good quality so the catch won't go bad before it can be enjoyed.

Travel to the beach means keeping drinks and food cold as well.  Yeti has a proven track record - sales are huge - and their products will last forever (or close).  The price tag is large, but the product is worth every penny.  To read more about Yeti's Warranty Information, click the link to the YETI website.

Now, are there similar products, that do the same thing for a fraction of the cost?  Some say "yes".  My son loves Engel coolers, and he owns quite a few, so my next page will be about those.

Read my Florida blog about beaches, boating, and beach combing where I live.

Shells Found on a Deserted Beach
Found lots of knobbed whelks on this deserted island beach in Mosquito Lagoon. And a few other pretty shells.
Deserted Beaches, Where and When
Many people dream of having a beach all to themselves. Because we have a boat, we often get to be on deserted beaches. But you can find deserted, and semi-deserted bea...
First Outing in the Sea Eagle Kayak
My first time out on the Sea Eagle inflatable kayak was a success even thought the weather did not cooperate.
Updated: 09/16/2018, dustytoes
Thank you! Would you like to post a comment now?
5

What do you think of Yeti products?

Thanks for your Yeti review Katie! Good to know about the dishwasher results. I always wash by hand as I don't have many to wash.

My daughters and I own all of the Yeti products you have highlighted here today. My youngest loves her pink cooler and it is stunning in real life. We have all the sizes and colors of the mugs and they are amazing. We were reluctant to wash them in the dish washer but after some time did so on light cycle in top rack and all is well after many washings. WE LOVE YETI

One good cooler is all you will ever need and the better the cooler is made, the longer food will stay cold. Combine a cooler pack with ice to prolong the coldness. Yeti also sells backpacks and bags, but yes, they are also expensive.

Yeti is the ultimate cooler. I would love to have one, but the price is too high for me now. Regular coolers just don't keep food cold for a long trip, although I could buy some dry ice.

Here in Florida if items are kept outdoors mold can be a problem. Some bleach water to clean will work for that.

dustytoes, Thank you for the practicalities and the products. Is there any special cleaning to keep everything brand-new pretty?

I live in central Florida and visit the beach often. Using a pop-up beach te... 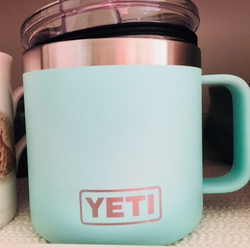 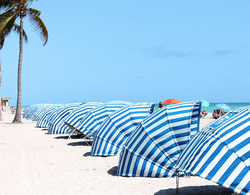 I live in central Florida and visit the beach often. Using a pop-up beach tent is one way to enjoy vacation without a sunburn.
100%  14   9 VictoriaLynn
Swimming

There are advantages and disadvantages of in-ground or above ground pools. Consider cost, upkeep, and long-term goals when considering what type of pool to buy.
Loading ...
Error!