While most people know Madame Jeanne-Marie Leprince de Beaumont only as an author of Beauty and the Beast, she actually created a huge volume of fictional and non-fictional works.

Jeanne-Marie Leprince de Beaumont published Beauty and the Beast in 1756 as a part of Magasin des Enfants (Magazine for Young Misses). It was a shortened version of Gabrielle-Suzanne de Villeneuve's fairy tale novella with the same name from 1740. It's also only one of the hundreds of works, signed by Madame Leprince de Beaumont, which established her as one of the most influential teachers in the 18th century.

She had a very intriguing private life as well.

We'll try to explore at least some trivia from her private life too but don't expect too much. Most of her life is intertwined with nobility, spies, and other members of society who invested huge efforts to hide their secrets. So here are 10 facts, or at least educated guesses about Madame Leprince de Beaumont:

1. She was born as a Marie-Barbe to Jean-Baptiste Le Prince and Barbe Plantart in Rouen. Her father was a painter and sculptor, specialized in gilded sculpting (decorating houses with wooden elements covered with thin layers of gold dust). Her mother died when Marie-Barbe was only eleven years old. The business was not going well, so she and her younger sister were sent to a convent school where she was educated to become a teacher. She was 14 years old and in those days she changed her name to now much more known Jeannie-Marie.

2. While it was meant she should stay there forever, Jeanne-Marie found a way to impress courtiers of the Duke of Lorraine and became a governess at the Duke's residence.

There's a theory it was not her teaching skills that sent her out of the nunnery but simply her lack of willingness to stay single forever.

It's hard to prove anything, yet it seems she married a master dancer Claude-Antoine Malter in 1737, right after she left Rouen. Antoine is very likely the father of her only daughter Elisabeth.

3. We can only guess what happened to Claude-Antoine Malter, but her correspondence shows it was a short-lived union. Well, short-lived in real life, yet she might stay his legal wife right to the end of her life. Official annulment of marriage or divorce can't be found in any available document and there is also no proof of his death which would make her a widow.

Anyway, Jeanne-Marie, started using the surname of Antoine Grimard de Beaumont as she would become his wife.

This was very likely not a legal marriage and it's not clear why she wanted him as a husband. He was a gambler, a heavy drinker and a womanizer.

On the other hand, he provided an established name from the world of nobility, where she found so many opportunities to earn a living, he introduced her to important people from literary circles (Voltaire, for instance), and his money wasn't unnecessary bonus either.

Jeannie-Marie Leprince de Beaumont separated Mr. de Beaumont in 1748 as a reaction to his marital infidelities but she kept his name for good. To make things even more unclear, there's a document where her supposedly estranged husband witnessed her signing a publishing contract with John Nourse in 1752.

His destiny is a bit of a mystery as well. Some sources claim he died of STD, others claim, he was killed in a duel.

4. Again, it's pure speculation how much truth is in accusations of several intellectuals who opposed Leprince de Beaumont's ideas in her works by discrediting her personalty. Jeannie-Marie was frequently mentioned in connection with several different men what was definitely not appropriate for a lady.

Especially not for a lady who worked as a governess and educator who should serve as a role model to girls turning into young women. Constant attacks in France were probably part of the reason for moving to London.

5. In 1763, she was introduced to Thomas Tyrell whose real name was Thomas Pichon. Life circumstances gave him an opportunity to find a job in the French Army that led him to the colonies in North America.

There he became a British spy.

He was selling information about Acadia to the British, used his influence to prevent the alliance of Acadians with Indians and gave several bad advice which weakened the Acadian colony, giving an opportunity to Great Britain to conquer the French colony.

Apart from being a spy, he was also a writer and notorious seducer of young women. He met Mme Leprince de Beaumont in London and they lived together as a husband and wife for several years. We can even find data about them being married but this is not reliable. The available correspondence even proves this was not possible because she was legally still married to Malter at the time.

6. Mme Leprince de Beaumont started writing at a relatively late age of her life. She was already 37 years old when her first three (!) works came out - a short novel A Triumph of Truth and two polemic pamphlets Letter in Response to "The Marvelous Year" and Solemn Decrees of Nature. While none of these works became popular, they marked her literary style: a rhetorical approach of an experienced pedagogue.

The theme of women's social rights became one of the main points in all her writings.

7. She moved to London to try her luck at British publishers and take the position of a governess. She worked in several influential families that probably inspired her to establish a magazine where she (and other authors, Voltaire included) published short educational stories. Fairy tales were among her favorites and she was probably the first author who wrote them strickly from the educational point of view.

The most popular format in the Young Misses Magazine (Magasin des Enfants) was the teacher talking to her pupils, discussing moral and ethical dilemmas, offering the solutions through examples in the fictional stories like fairy tales.

8. The popularity of Leprince de Beaumont's works surpassed her contemporaries like Emilie du Chatelet and Francoise de Graffigny, being compared to the most influential thinkers like Rousseau and Voltaire. Her work was always written in French and translated later - eventually to all major European languages with subscribers from Canada to Russia (including the Empress herself!).

9. While we mostly know her version of Beauty and the Beast, she also wrote many other fairy tales that were not only a successful part of Young Misses Magazine but achieved at least moderate success on their own. Here are some titles:

10. After fifteen successful years in England, she returned to France. Located at Avallon, Burgundy, she still stayed active, with numerous trips to Paris and even spending several months in Spain. Yet it seems the majority of her energy went to her daughter and her family (she bore six kids, including a future mother of Prosper Merimee).

While we can safely say Leprince de Beaumont's legacy lies in her instructions to parents and kids, especially on giving tips to young women preparing to marriage, modern analytics more and more often expose her unique contribution to feminism, which is based on Christian faith and paradoxically sacrifice, leading to strong and independent women who were not only able to equally participate in society but to transform it too.

Can you add an additional fact about Mme Leprince de Beaumont?

Thank you, Veronica. You are very kind.

your traditional tales knowledge is outstanding …..and a pleasure to read

Tolovaj, Thank you for the additional clarifications. This is a most welcome follow-up to Beauty and the Beast, which I've read, along with all your other posts. I tend not to leave comments -- although I always vote -- when I read them quite a bit after they've been created.

Hi, DerdriuMarriner, it's alwys a pleasure to see your insightful comments. No, I don't known why she changed her name, but it is very likely related to her entrance into the convent, where such name changes are very common. Using the name of her father can be party to keep it in the memory, but I don't think the length of his life has anything with it.

About her marriage(s) ... It's very unclear. She definitely used the surname of her 'second' husband, yet it seems, according to the letters (her letters) found by historians, she stayed married to the dancer right to the end of her life. Anyway, her daughter used the name of Mr. de Beaumont, just like Mme Leprince de Beaumont, what is pretty logical, because it was very respectable name which helped to open numerous doors - very helpful for everybody, especially for a woman who wanted to created any kind of business. And it worked pretty well for her, right?

Tolovaj, Thank you for the practicalities and products.
Do we know why she chose Jeanne-Marie? It's perhaps possible that her father didn't live long and that she feminized her father's name so that she carried both parents' names, right?
It's interesting that she both posed as the wife of more than one husband even as she seemed not to hide Elisabeth's identity as her daughter. What surname was Elisabeth (grandmother of Mérimée, no less!) known by? 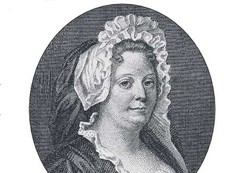 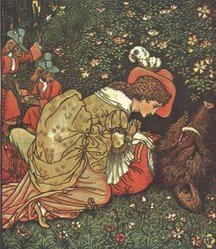 Beauty and the Beast has many versions, interesting interpretations and has been adapted to all existing media. Here are a few interesting facts.
69%  10   5 Tolovaj
Fairy Folklore

The princess made a promise to a frog and doesn't want to keep it. To her surprise, her father takes frog's side!
Loading ...
Error!