The princess made a promise to a frog and doesn't want to keep it. To her surprise, her father takes frog's side!

Frog Prince is well known fairy tale from the famous collection of brothers Grimm. It is a classical story with all the main elements of popular tales, like clash of social classes, deception, magic transformation and happy ending. It is loaded with important symbols and people from all over the world know it in dozens, if not hundreds of different variations.

It's officially marked as KHM 1, what means it was written as first in the first version of Grimms' Fairy Tales. This is probably not a coincidence because this particular story reflects all the important issues of the society both famous scholars felt need to be addressed.

(all used images are in public domain)

Her are top 10 interesting facts about the Frog King:

1. The main part of the story is dialogue between a frog and a princess. While in first edition this dialogue is pretty straight forward (frog wants to get in bed with her), Wilhelm Grimm made at least three major rewritttings of the story to make it more appropriate for his audience (first edition was never meant for children). He shifted the focus from frog's need to transform into princess' broken promise.

2. The most famous censored scene is (surprised?) in her bedroom. In older versions they sleep in the same bed and when they woke up, the frog is transformed into a prince. In later editions she throws the frog against the wall right after he demanded she should pick him up and put in bed. Some analysts explain this as a necessary proof of passion. If they want any kind of relationship even bitter emotions are better than no emotions at all.

3. Throwing a frog against the wall is not the most violent version of the story. There are also very similar tales where the princess behead the frog or burns his skin...

Symbols of fertility, life and growing up

4. Frog is many cultures closely connected with fertility. In the story about the Sleeping Beauty, for instance, a frog tells the queen she will after all the years of waiting give a birth to a girl. Frog (in several versions replaced by a snake) can also be interpreted as a symbol of maturity. A girl is old enough to get a husband but still young, inexperienced and immature (what is clearly represented with her need for a toy). She is willing to explore life, she talks to a frog and makes a promise, but she is not serious enough to keep her word and she is even disgusted with frog's appearance. 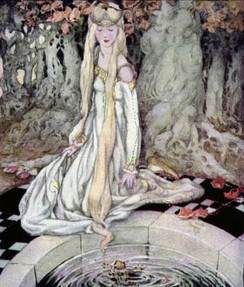 Marie-Louise Von Franz, famous Jungian scholar, discovered similar stories of humans being enchanted into frogs, reptiles or snakes in many different civilizations with very different look on human intimacy or animals, so it is probably better to explain her action with her state of mind (resistance to the change) than his appearance (and possible similarity with particular organs).

5. The above mentioned deal of the princess with a frog happens at the well (symbol of birth) in the woods. Although forest is doesn't play so important role as in many other famous fairy tales (think about Red Riding Hood, Beauty and the Beast, Snow White and others), this is again the place where the magical transformation of both main characters starts. Forest is popularly interpreted as a symbol of unconscious, a danger which is inevitable, if the character wants to find his/her true call.

6. Golden ball can be understood in different ways as well. Mythologists like to explain it as a sun (similar to the hood in Red Riding Hood), which is lost until it rises again - on completely new life for princess. It can also be explained as symbol of perfection (ball has a perfect round shape), maturity (it is made of gold after all) and carefree childhood which is lost forever when she drops it in the well.

7. King is another popular symbol which usually represents the authority. He is the one who orders the spoiled princess to keep her word. He is the one who says it doesn't matter to whom the promise is given, it is about her integrity to keep it. Please notice, there is no queen in the story. The plot doesn't need her. It is about the girl who promised to do something in exchange for something else and she needs a reminder which could be her inner voice (guilt) as well.

What is your opinion on symbols in fairy tales?

Can we really look at them as the coded messages?

8. Iron Henry is a Frog Prince's servant who appears only at the end of the story, when all the important things already happened. From dramatic point of view nobody needs him.

Some try to excuse him as a part of the puzzle around prince's enchantment, but he never explains why the prince was transformed in a frog. Other see him in the role of the mother who brought a coach, symbolical of womb, to help the couple into new life. Bruno Bettelheim sees him as unnecessary contrast (he is unbelievably loyal and sympathetic) to disloyal princess.

9. There is no kiss in Frog King by Jakob and Wilhelm Grimm. They were clearly against such intimacy among unmarried couples. This element was very likely added by Edgar Taylor, who first translated the tale in English. 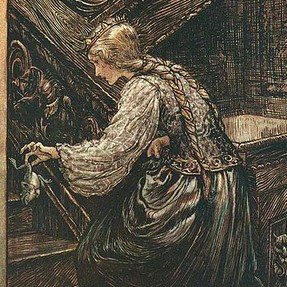 His translation was made with children as audience in mind and he probably wasn't satisfied with so violent cause of transformation.

Instead of that he choose a romantic kiss and created one of the most famous pop culture sayings: 'You have to kiss a lot of frogs before you find your prince'.

10. This saying of course could go either way and encourages men and women to keep searching for life partner even after series of misadventures in love.

While majority of variations of the Frog Prince presents a transformation of a frog into a prince, there are also many versions where the prince needs to perform certain tasks before a frog is transformed into a princess!

If you enjoyed the illustrations, here are many vintage illustrations of fairy tales with accompanying facts from lives of their creators:

What is your view on The Frog Prince?

Thank you, sheilamarie, you are very kind!

You always teach us so much in your articles on fairy tales. Thanks, Tolovaj.

Good for you :). Am glad you make time for Wizzley in your busy life ;)

Thanks, Tolovaj, from your answer. I knew you had a publishing house but now it sounds like you write stuff yourself as well? Nice!! :)

The answer to your question is pretty simple, Mira. When I wrote so many stories and fairy tales, some were good, some average and some really bad. As I make a living from fiction (mostly) writing, I am of course interested to understand why in some cases things 'work' and in others not. This got me to the theory behind classic fairy tales, which of course stood the test of time, so criteria is much more absolute then criteria of this or that editor.

How very interesting. Looking at fairy tales closely can turn into a good study of social mores. I didn't imagine a kiss could be inappropriate, too. Also, funny how the girl's smacking the frog into a wall is read as a sign of passion.
Thank you for yet another great read!! How did you get interested in fairy tales? To this level, I mean?

Thanks for your visit, JoHarrington!

It's fascinating to see all that's going on in these fairy stories. It reminds us how much tradition and history is wrapped up in them. Thanks for sharing your knowledge.

In modern times we too often forget the importance of reading fairy tales to our kids. Why are fairy tales so important?
100%  21   11 Tolovaj
Children's Books