We can distinguish between all sorts of promises, but promise is always some sort of obligation involving at least two parties.

Promises are part of our everyday life. We hardly notice when we make a promise or break it, although sometimes this simple action can have fatal consequences.

A promise can be viewed from different angles: law, religion, philosophy... As everybody who knows me can expect I'll try to provide some additional info on promises from popular fairy tales - my favorite subject.

Here we go with Top 10 examples of importance of promises in fairy tales!

(All images are in Public Domain)

Your word is important 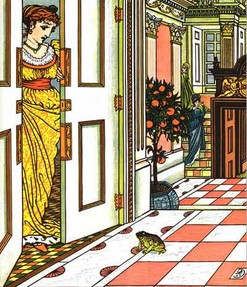 1. Frog Prince, also known as Frog King is typical fairy tale of brothers Grimm. The story tells us about the princess who had lost her golden ball. Frog offers her a help but wants something in return. So she promises she will be frog's friend, they will share food, toys and even a bed. She of course doesn't mean to keep this promise. She is a princess and frog is, well, only a frog.

Than enters the king as authority and orders her to keep the promise. When she realize how important is her word, frog changes into a prince and everybody's happy...

2. Rapunzel is another classic fairy tale with important view on promises. Although the witch force the soon to be father to give her his daughter, seems only fair to keep this promise. The witch got a kid and she is never punished for this. After all she did her part of the deal, right?

3. Ivan Tsarevich, the Sea King and Vasilissa the Wise has a similar plot. But here father doesn't even know he is going to become a father and yet he gives "a casket where the destiny of somebody he doesn't know is kept" to the Sea King.

When he returns home, his wife has already given a birth and only than he discovers he will loose his son. But promise is a promise and one day he have to send him to Sea Kingdom...

4. Little Red Riding Hood is entirely built on importance of promise. Before she leaves her home, she has to promise not to stray from the path. Soon after she meets a wolf, she breaks a promise and - her punishment is death.

5. Snow White carries similar message about promises. When dwarfs leave the house she has to promise not to open to anybody yet she does exactly that. So she dies too - three times in a row!

6. What about Cinderella? Her evil stepmother gives her a promise too. Cinderella can go to the dance, if she complete impossible task. Well, Cinderella does her part of the deal but step mother breaks her promise. In the end she dies!

Let's step back a little and compare these three fairy tales. Red Riding Hood and Snow White broke their promises and got second (or fourth...) chance. Why is not the same case with Cinderella's step mother?

The reason is probably her age. She is already old enough to learn a lesson: Don't break your promise! Keeping one's word was important to brother's Grimm. They did study law after all!

But you can break a contract...

Sometimes we can bypass the obligation of the given word.

7. This is very noticeable in the Goose Girl. The princess is forced to make a promise not to tell anybody about her royal origin and than switch identities with her maiden. When the king tries to help her, she can't tell the truth, because she promised 'not to tell any living soul'.

But the king is wise. He advices her to tell her story into old iron stove. Than he eavesdrops at the other end and the truth comes out without her breaking a promise!

Not every promise has the same legal consequences

8. In Rumpelstilskin we deal with two kinds of promises. First is a miller's claim about his daughter's abilities. He said she can spin gold from straw. King demands a proof and daughter is practically condemned to death. 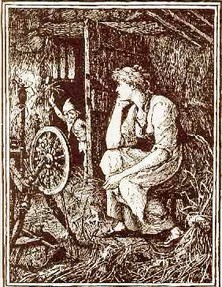 Unexpectedly a little man offers his help if she makes a promise on her own. She promises him her unborn son (and she is not even pregnant, so this promise doesn't sound too serious if we think she'll be dead without gold in couple of hours anyway).

But little man (Rumpelstiltskin is his name) keeps his promise, she marries a king and after a year they got a son. Rumpelstiltskin demands a boy and his mother is in serious trouble. Fortunately she manages to make another deal. If she guess little man's name, she can keep the boy. Finally she wins, so she doesn't have to keep her promise.

9. We have similar situation with two promises in the Beauty and the Beast. First is father's promise to send his daughter into Beast's castle in exchange for his life. When she (Beauty) comes and step after step falls in love with the Beast, has to promise to return to the castle after visit to her family.

In her home she becomes a victim of intrigues of her sisters and almost forgets to keep her promise. But love conquers all and Beauty returns soon enough to save his life, break a spell and they live happily ever after. 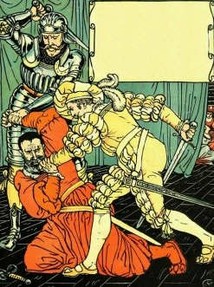 10. Less happy is the ending of the Bluebeard. When he leaves the castle, he gives his keys to his wife and she has to promise not to open one specific door. She break her promise and he wants to punish her with beheading.

She shows regret but Bluebeard stays merciless. This seems too cruel punishment for her act of curiosity anyway and we as readers are totally satisfied with the ending. Bluebeard, serial killer and unforgiving monster dies and his wife, despite breaking her promise, becomes rich heiress.

Apparently under certain circumstances we can break a promise.

And forgiving can be even more important than keeping one's promise!

Do you keep your promises?

Well said, WriterArtist. Maybe this calls for another article?

There is another aspect of promise - pertaining to moral obligations and duties. The promises that need to be kept for one's own satisfaction and there is no compulsion from other side.

How very interesting! I really enjoy your articles on fairy tales.

Good point, WriterArtist, guilt can be interesting theme too.

Wow - these are some beautiful tales of promises kept and broken. You have brought this subject in an interesting way. Coming to me, if I made a promise to someone, I would like to adhere otherwise I keep feeling guilty.

Thanks, sheilamarie. I believe the importance of given word is one of the bigger problems in today's society. Every new generation knows less about responsibility and good stories for kids can only help. Unfortunately good stories are often lost in big piles of bad ones...

Nicely presented, Tolovaj. Some of these ideas are crucial for a child and can be understood so much better from within a story.

Yes, we can see many interesting thoughts in fairy tales if we look at them from different angles. Thanks for your comment.

I never thought of these fairy tales in this way. Thanks for the interesting article. 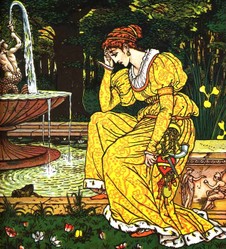 Hans Christian Andersen is famous author of fairy tales. Less known are similarities of his life with his fairy tales.
100%  21   10 Tolovaj
Other Celebrities