Cinderella is one of oldest and most popular fairy tales of all times. It is a breathtaking story with amazing history.

Why is Cinderella so popular? We can trace astonishing history of this fairy tale more than two thousand years back in time and we can find her relatives all over the world. What is so special about the girl and the shoe?

Let me provide top 10 amazing facts about Cinderella, so you can entertain your friends!

Top 10 amazing facts about Cinderella, most popular fairy tale in the world!

1. It is almost impossible to find a part of the world without its own variation of Cinderella. There are at least 500 known versions of Cinderella in Europe only!

2. One of oldest variations is Ye Xian (also known as Yeh-Shen) from 9th century. This Chinese fairy tale has all the elements of today's most recognized Cinderella: mother and stepmother, competitive sisters and main character (Yeh-Shen) loosing her noble position and becoming a servant. Despite constant abusing by her stepmother Yeh-Shen doesn't lose her spirit. When the occasion arrives, Yeh-Shen gets amusing dress with matching slippers (made of gold). Of course one of the slippers comes in hands of the king and all is set for happy ending.

3. There is even oldest story first mentioned in 5 th century BC and written in 1st century BC. It is called Rhodopis, what can be translated 'rosy cheeked'.  Rhodopis is a slave (no noble origin), her master doesn't notice how hard working she is, she is teased by other servants (no relatives are mentioned) and there is also a pharaoh (story is Egyptian) who becomes her husband in the end.

Rhodopis earned a pair of beautiful slippers covered with gold with her dancing skills. When she was washing clothes by the river, a falcon stealed one of the slipper just to throw it into the lap of the pharaoh who was in the neighborhood. The rest is history. Well, there is a chance Rhodopis really lived and was a contemporary of another famous man: Aesop. But some historians suggest she was not a slave servant but a courtesan.

Cinderella's slippers are gold in most versions

4. We too often take shoes for granted and forget only couple of centuries ago they were reserved for nobility only. Man who had shoes was considered wealthy and affluent, well, buying first pair of shoes for a boy or girl is in many environments still considered as symbolic act of growing up. Remember another fairy tale: Puss in Boots? By wearing boots he was accepted into high society. The cat became a man!

And we shall not forget many poor people in undeveloped countries still can't afford shoes, so they are still status symbol.  On the other hand many yuppies are still competing in numbers and prices of pairs they own. Having the right pair signed by the right designer can be the key into the right circles. Status symbol again!

5. Because we are walking in shoes, we associate them with earth, dirt, reality. No surprise in so many religions we have to put shoes off when we enter religious object. In many cultures we are also expected to put our shoes off before we enter into other man's house.

6. Shoes are extremely powerful sexual symbol. Finding the right feet for the exact shoe can be easily understood as finding a mate for life. Many wedding ceremonies all over the world, some with thousands years of tradition, include shoes, in most cases passing a pair of bride's shoes from her father to her husband.

From villain to martyr

7. Talking about history of fairy tales we must always mention Giambattista Basile's book Pentamerone, sometimes called mother of all fairy tales. Title of the story is Cenerentola (Cinderella is here called Zezolla) and we have all the basic elements of today's most popular versions: wicked step mother, unfriendly sisters (six in this case), Zezzola has to work in the kitchen, a fairy and a tree with magic powers, king's ball, three escapes of disguised Zezzola and, what else, a shoe which can fit only Zezzola's foot.

Beware! There is one big exception from other Cinderella's. Zezzola in Basile's story on advice of her governess kills her stepmother and then convince her father to marry governess (who became her second step mother) just to find out this step mother is much worse than first one!

8. In 17 th century Charles Perrault wrote his version of Cinderella (called Cendrillion). He erased the tree and added pumpkin transformed into coach and mouses transformed into servants. All these novelties were more than welcomed when Disney made his animated film about Cinderella. But! Perrault's wicked sisters were in fact pretty and in the end they find noble husbands too.

Probably most important specialty is material of slippers: this is first version with slippers made of glass and this is so different from older variants many people believed Perrault mistranslated older story with slippers made of fur (there were only two materials suitable for Cinderella's shoes in history: gold or precious furs). Now we can be almost sure Perrault made shoes of glass on purpose.

9. Brothers Grimm were closer to tradition. Their version doesn't have a fairy or a coach with servants, but it has a tree growing on Cinderella's dead mother's grave, being watered by Cinderella's tears and waiting to fulfill Cinderella's most important wishes. Slippers are here made of gold again.

Grimm's version introduced birds as Cinderella's helpers. And as we know, white dove is a symbol of holy spirit. Message of Jakob an Wilhelm was: be obedient, be patient, be persistent and you will be rewarded. Another characteristic is cruel punishment of wicked sisters. They lost parts of their feet when desperately tried to put them into tiny slipper and they lost their eyes when attended wedding ceremony of Cinderella!

10. The most popular and profitable Cinderella was made by Walt Disney in 1950 with a budget of unbelievable three million dollars. Disney company was in financial troubles in those times and Cinderella maybe saved them from bankruptcy.

This was not Cinderella's last success. Working Girl with Melanie Griffith, Pretty Woman with Julia Roberts, Ever After with Drew Barrymore are only some of hundreds of movies based on the same elements as Cinderella. Apparently we all enjoy in this story again and again. For the rest of our lives?

What version of Cinderella do you prefer?

Did you know Cinderella is probably one single most studied story in the world?

Pepelka (Cinderella in Slovene)
My translation of Cinderella, made for audio edition, it is a hybrid of more entertaining Perrault's and from dramatic point of view better Grimm's versions. It was first written as radio play with sound effects and everything, but now is transformed in prose with some additional explanations and shocking details from the story's rich history.

Cinderella, most popular fairy tale in the world
My older article about Cinderella, with some additional info and nice illustrations.

Tolovaj, Thank you for prettifying your 10 fun facts with the Dore illustration.
In addition, I appreciate the link to your Feb. 27, 2011 article and to your HubPages writings.
Have you seen the Kenneth Branagh-directed Cinderella film?

I've always loved the story of Cinderella. I'm pinning this to My Wizzley Writing Board.

The Cindarella story in its hundreds variation is probably the most popular tale in the world. It is known in all cultures. Thanks for stopping by, WriterArtist.

I have often dreamed myself of being a princess - Cinderella or Snow white and a prince charming who would be my hero. I am surprised with so many versions of stories in the ancient days, well - we have history repeating itself. The story of Cinderella keeps repeating in the modern days as well.

I think we all have. I also like your perspective on shoes. Great article.

Well said, sheilamarie! We don't all have evil stepmothers, but we all have experienced some kind of injustice, so Cinderella should be understandable to every one of us.

Certainly I have! Although I've never had an evil step mother or mean step sisters, I think we can all relate to feeling invisible sometimes and in need of a little magic.

Yes, and this is also important for researchers of history of fairy tales. It doesn't support the theory about one story/myth from which all others evolved. 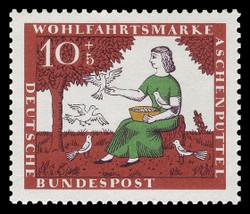 In modern times we too often forget the importance of reading fairy tales to our kids. Why are fairy tales so important?
96%  16   8 Tolovaj
Classics

Jakob and Wilhelm Grimm wrote most popular collection of fairy tales of all times. They also helped to set some of most important values for all humankind.
Loading ...
Error!