Three reasons that (possibly) cover every angle for wanting to learn a new language.

Why would you want to expend time, effort, and money on learning a language apart from the one (or the ones) you already speak and use on a regular basis?

If you sit down and think about it, you can probably list down a hundred and one reasons. However, I think all of those reasons can be distilled to three compelling ideas that just about cover everything. You may or may not agree with me, but here's what I think.

Reason One: To Help Preserve Languages

Did you know that one language dies every 14 days? I suppose that it is very safe to say that that is a higher rate than people learning new languages.

There are currently 7,000 languages in the world, but many are in danger of extinction. If this is not enough reason for people to go out there and learn languages so that they do not die out, I don't know what a good enough reason is!

Seriously, one does not have to be a linguist to understand that languages encompass more than a means of communication. Languages cover cultures, the way people live and perceive things. They can give us deeper insights and knowledge about people and the environment they live in.

There is actually a project called The Endangered Languages Project, which aims to preserve languages of the world. Even if you cannot take the time to learn one of these endangered languages, you might still be able to help.

On another note, it is not too crazy to think that many languages that are not so popular may find themselves in the endangered language list in the future. It is thus not unthinkable for people of today to try to prevent that from happening by choosing to learn lesser known languages and passing on the knowledge.

Instead of learning how to speak Italian, French, or Spanish, how about Thai, Vietnamese, or Ndebele?

Without a doubt, this is the most practical reason to learn a language.

If, for example, you have to move to an Asian country for whatever reason - and you've lived in the UK all your life - then you might want to learn the language spoken in your destination country. After all, even though English is widely spoken in most places, you will still benefit from being able to communicate in the local language.

Another popular reason to learn a language to address a specific need is for travelers. While they may not permanently move to a different country, there is still a small need to learn the basics of a language in order to get around. While this is not as pressing a need as the previous one, being able to say "Good morning" or "Thank you" does help. Just don't push it and try to speak complicated sentences if you know you're not at that level. The locals will probably understand you better if you speak in English.

Work. I have encountered a lot of people who had to study English because of work. Mandarin Chinese and Japanese are also becoming popular languages for work reasons. In some cases, people cannot get promoted due to lack of language proficiency.

In these cases, one almost has no choice except to learn a new language.

Reason Three: Just Because You Can

Truth be told, I don't always like this reasoning. People do all sorts of things "just because they can", and many times this kind of thinking can lead to all sorts of disastrous events.

Then again, by the looks of it, this phrase is not going anywhere soon. We might as well use it in a productive sense. If you are looking for a reason - or someone asks you for a reason - to learn a new language, just think: "Just because I can!"

Gone are the days when access to learning was difficult. With technology making the world smaller and smaller, there are so many ways you can learn a new language. You do not even have to leave your bedroom if you do not want to. You may even find a way to learn a new language without having to pay.

So yes, if you think about it, anyone can learn a language. Just because they can.

What Do You Think?

So what do you think about lumping all those specific reasons to learn a language into three umbrella reasons? Am I going too far or does it make sense?
Updated: 06/25/2012, WordWelder
Thank you! Would you like to post a comment now?
2

I had no idea that a language died every two weeks! That's sad.

Firstly, many thanks for featuring our image to illustrate this article.

However, please note that our usage terms require accreditation to link to http://kexino.com and not to the Flickr page, as it does at the moment.

How to Learn the Bengali Language

A list of materials and resources to learn the Bengali language 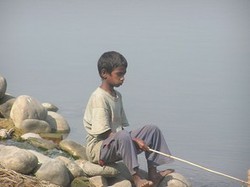 How to Learn the Bengali Language