By Mira at Wizzley. Some of my favorite words and phrases that are particular (peculiar) to British English. Selection from the Cambridge Idioms Dictionary, 2nd edition, 2006.

I’ve heard many Americans say that British English is a different language, and for many reasons that statement stands true. There are many different words and phrases that British English uses for the same referent (bonnet for a car’s hood, jumper for sweater, etc.). Then, as with all cultures even at this stage of globalization, there are words and phrases that don’t have an American English equivalent (think certain specific foods or products; my mind first went to Marmite, but I'm learning it's actually available in the US as well). Finally, there are words and phrases that exist in AmE but are used differently (I’ll write about that in another article). So things can get pretty confusing.

Of course, there are also other differences, which fall into the categories of spelling, pronunciation, differences in the use of verb tenses, writing dates, differences in punctuation after titles, etc. I’m not going to deal with them here. They are also rather well-known.

This is the beginning of a series that will go alphabetically at first, and then all over the alphabet with various British English words and phrases I wrote down over the past few years, when I finally found time to read more for fun, and chose to focus on contemporary British fiction. It was also around this time, the summer of 2009, that I discovered British chick lit.

A note on the words phrase, idiom, and expression

As I use them here and as I have also found them defined in dictionaries,

a phrase is "a sequence of two or more words arranged in a grammatical construction and acting as a unit in a sentence” (Dictionary.com Unabridged, based on the Random House Dictionary);

an idiom is an expression whose meaning is not predictable from the usual meanings of its constituent elements (Dictionary.com Unabridged, based on the Random House Dictionary), as “to pull someone’s leg;”

and an expression is a particular phrase used conventionally to express something (Collins Complete & Unabridged 2009).

All idioms and expressions are, therefore, phrases to begin with.

Here are some of my favorite words and phrases that are particular (peculiar) to British English. The selection is based on the Cambridge Idioms Dictionary, 2nd edition, 2006. Where possible, I tried to define the phrases listed here by giving an American equivalent.

As for the Cambridge Idioms Dictionary, to me it posed more questions than it answered. Take get on your bike, for instance. This dictionary says it means "go out and look for work," which apparently, as I learned online, is a meaning that was established after British politician Norman Tebbitt used the phrase in that sense in a certain speech he gave in the eighties. 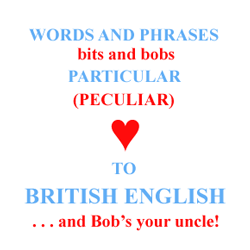 It turns out that, in fact, in British English on your bike is, first and foremost, simply a dismissive phrase, which children might hear often. It isn't always about urging someone to look for work.
Then there were other phrases, like to get no chance out of someone, and to have had your chips, for which the definitions given differed from how native speakers use these phrases online. So, in these two cases, I give here definitions and explanations which I've seen confirmed by British English speakers online. If you are one and you use these phrases differently, please let me know in comments.

So here come some of my favorite British English words and phrases.

argy-bargy – loud dispute or argument. Rhyming jingle based on “argue”

can’t be arsed -- can’t be bothered, which is also British.

to be fed up to the back teeth – to be fed to the teeth in AmE, or, more commonly, fed to the gills, or fed up to here (accompanied by gesture)

to be in a bad way (British and Australian) – to be in a bad place; can be used of both people and things (businesses, countries, etc.). Here “way” means condition or state.

to be off-beam (British and Australian) – to be wrong

the bee’s knees – excellent; slang taken up by Americans in the 1920s, which is also when they started using “the cat’s pajamas” and other similar expressions

a bit of how’s your father (British and Australian) – sex

bits and bobs – bits and pieces, odds and ends

and Bob’s your uncle! – something like “that’s all; it’s easy;” used to emphasize that you will be successful after following some easy instruction steps. As in, “Sauté the onion and garlic, add the veggies, tomato juice and spices, cover for 10 minutes, and Bob’s your uncle, you’re done!”

(That’s/There’s a) turn-up for the books – something unexpected. Comes from betting in horse racing. If a race was won by a horse that wasn’t wagered on in the bookmaker’s book, then the latter got to keep all the money.

Why break the habit of a lifetime? (British and Australian) – self-explanatory

like chalk and cheese – (superficially alike but in fact) totally different

Chance would be a fine thing! – said when you desire something that isn’t likely to happen. As in a response to an invitation.

cheap and cheerful (British and Australian) – cheap but of decent quality

to have had your chips – to be done for

off one’s chump / off one’s trolley – out of one's mind (off one’s rocker, off one’s nut -- but these can have certain, specific connotations)

A Crash Course in British English

If you want to start your study of British English at full throttle, I recommend David Lodge's Campus Trilogy, which is also a fun read about life in the academia for the professors as well a reflection on what academics thought a novel should deal with and read like to be trendy.

The Trilogy consists of Changing Places, Small World, and Nice World. The first was my favorite. I loved the characters of Morris Zapp and Philip Sparrow, the American professor and the British lecturer, and how they enter and change each other's lives. The story is set in 1969 in the fictional university called Euphoric State, modeled on UC Berkeley. The novel is a lot of fun even though somehow Lodge's humor seems dated. But Changing Places, as well as the other two, are highly enjoyable nevertheless. Enjoy!

Listen to Some of the Accents Found in the British Isles

Video: How to do a Cockney accent

Video: How to do a Geordie accent (NE England)

Video: How to do a Scottish accent

Video: How to do a Welsh accent (South Wales)

Video: How to do an Irish accent

Thanks, Frank. Dialects are fascinating :)

Scots call a sandwich a piece, but this is accounted as dialect rather than standard.

I don't make an issue of accent. I neither affect one nor try to be rid of my northern accent.

I would never ever, use the word " butty ". My children are I their 30's and have never used it either. They say sandwich as do I.

I am married to a southerner and over 42 years together my northern accent is not as pronounced as other peoples'.

Mira, your commitment to perfecting your English is impressive. Here is a bit of advice. Northerners often call a sandwich a butty, although this is regarded as colloquial English rather than standard. Northerners also pronounce u differently from the way Southerners do. For example, Southerners pronounce bus in a slightly nasal way, but Northerners do not. The northern pronunication of u is made with pursed lips. This difference in pronunciation caused my son some communication difficulties when he was in Norway.

Frank: I'm learning something new re British and American English almost every day :)

Hi Derdriu, my accent is pretty standard, whatever that is :)

Mira,your English is so good that I could not tell that you are not a native speaker.

Drink Tea and Let It Be, and Other Fun and Inspirational Tea S...

Playful, fun, and funny tea slogans and taglines, quotes and quips, that will... Drink Tea and Let It Be, and Other Fun and Inspirational Tea Slogans

Playful, fun, and funny tea slogans and taglines, quotes and quips, that will appeal to serious tea lovers
100%  29   20 Mira
Other Gadgets