An article about eastern wild turkeys. Provides 7 facts on these birds and discusses their history and evolution.

Large and awkward in flight eastern wild turkeys inhabit much of the continental United States from the Canadian border to the Mexican border. Although the birds were once hunted and their populations decimated in states such As New Hampshire, the turkeys have made a comeback and there is even limited hunting seasons in most eastern states. The birds inhabit all of the northeastern states and it is normal during spring and fall seasons to see large flocks in fields and along roadsides. The wild turkey is an impressive bird when seen on the ground and also in flight.

There are many interesting things to know about the wild turkeys that inhabit the woods of the United States.  Here are a few interesting facts.

In the 1930s the population of Wild Turkeys was very small.  Turkeys living in the wild had suffered from many years of over hunting and the destruction of their natural habitat.  These two factors led to a rapid drop in the population around the country.  Turkey hunts were often times fruitless as there simply ere no birds to be found in the woods and fields of the northeast.  In the state of New Hampshire during the 1950s and 1960s it was believed that there were no wild turkeys living in the state at all.  Throughout New England the turkey populations were very small.  The birds became protected and with the establishment and passage of the Pittman-Robertson Act in 1937 funds became available to restore habitats and reintroduce turkey populations to the northeast.  The astern Wild Turkey began to reappear in New Hampshire in the 1970s.

The body of a male wild turkey is normally covered in 5,000 to 6,000 feathers.  These feathers are patterned in a way that provides natural camouflage for the birds.  The feather tracts on  the birds allow them to easily blend in with the foliage.  The coloration of the feathers in iridescent brown and gold hues blend in with underbrush and leave coverings to make them hard to spot by predators.  Even with the large size of a Tom (male) they can easily blend into forest habitats.

During the spring wild turkeys go through a mating ritual.  This is when they are normally viewed in fields and along roadsides in New England.  These birds prefer large open spaces for the mating rituals.  Once they have mated the hen will normally lay 10 to 12eggs.  Eggs are laid one a day over a two week period and then incubated for 28 days. Some people buy wild turkey eggs and sites such as www.HatchingEggs.net have them for sale which allows people to hatch and breed their own turkeys.

The typical male turkey weighs around 20 pounds and is distinguished by his fan tail, caruncle, snood and dewlap.  Both males and females may have a beard, growth of feathers on the chest area.

Wild turkeys are omnivores, meaning they eat both plants and meats.  The normal diet is approximately 90% wild seeds and berries and 10% other items that may include small insects or other fleshy items.

Turkeys are capable of flight and can land in tight spaces.  They seem rather awkward when taking off or landing and this is mainly because of their large size.  Turkeys do not normally fly long distances.

Turkeys are not migratory and will remain in their habitats through the winter.  Finding small areas where seepage occurs and there is some plant life will provide turkeys with forage for the winter months.  Woodlands and forests provide protection form winter’s harshest elements.

You use duck eggs the same way you use chicken eggs. Duck eggs have more fat ... 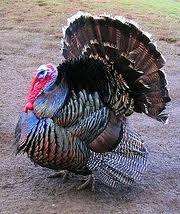 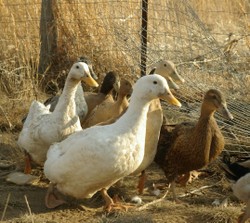 You use duck eggs the same way you use chicken eggs. Duck eggs have more fat in the yolk and more protein in the white, which make them great for baked goods.
Loading ...
Error!