A Child With a Camera

Putting a camera in the hands of a child can bring about some amazing results and can encourage a child's creativity. Viewing pictures they have taken can be very exciting as well.

If you are looking for a perfect gift for a young child or you want to see things from a different perspective, a camera is a perfect choice. The pictures they take can give you an intriguing view of what they value or what captures their curiosity. Looking at pictures with the child photographer may also prompt some interesting conversation!

First and foremost, I am not naïve and I feel the need to express this fact before I write an article that may make me appear as though I am a writer that lives in la la land. I know that sadly, not all children have the childhood they deserve.  Many live in extreme poverty and are personally exposed to and experience the consequences of societies plagued with corruption, violence and a disregard for basic human rights.  Providing these children with a camera for a short period of time would undoubtedly provide a deeper insight into their daily plight. The resulting photographs would also be demonstrative of the environmental factors that contribute to a “lost childhood”.  Many of us, as adults, may be shocked by the images digitally captured and ready to print.  I will one day write an article from this perspective but this article is not based on that side of reality.

Children, in general, look at the world around them far differently than you or I do. I know I am not providing earth shattering news when I make this statement. But have you ever taken the time to see it through their eyes? I have personally found an easy way to do this and the results are often inspiring and thought provoking.

I bought my grandson a Fisher Price camera when he was almost three years old. It was digital, appeared to  made of a rubber type material and very rugged.  It was a huge hit! He used it frequently, snapped photo’s to his hearts delight, and dropped the camera too many times to count. After three years of use it wore out and I had to replace it with another.  This time I purchased an additional memory card to give him greater “mileage” with his photo shoots! Why would I spend a significant amount of money on a camera, not once, but twice for a child of his young age? Simply because it was well worth it.

His first camera allowed me to see his world through his eyes. As I looked at his pictures of his parents and other members of his family I realized that he felt the attachment and knew that we were “his”.  His numerous self-portraits with the big smile made me smile. There were pictures of his house, taken as he was pulling away in the car. I inquired about them and his response was, “It’s where I come back to Me-Me!” He felt secure in going, knowing he was returning.

The camera had different applications as well. He modified some of his pictures on occasion.  He put glasses on his father. It happened to be a night his dad didn’t read to him before bed.  He added a huge hat on his mother’s head within days of her having her hair cut and restyled. He put a new nose on a picture of me.  I am not going to interpret that… I will just keep reminding myself that sometimes kids do things spontaneously without reason!

When he received his second camera, he was almost 6 and it is the one he continues to use. The images he captures with this one have expanded to include the world around him.  They have captured the beauty in simplicity that I often failed or forgotten how to truly see. The photographs have given me a different theory of why children may walk so much slower at times; The world really does look a bit different from a 2 ½’ perspective.  I’ve learned to walk a little slower and wait when I need to as he trudges along,  stopping frequently to snap his shutter.

Recently, I bought him IMAX Under the Sea. As he was watching it, I left the room and returned to find him clicking away. He told me he was taking pictures of the sea creatures as though he was there.  That evening, when I loaded the photographs onto the computer, I saw beauty and color but I also saw HIS imagination and could easily identify what had enthralled him.

The ordinary through the eyes of a child truly can become extraordinary.

Two camera’s…an incredible gift for both of us.  If I have to purchase five more I will, without hesitation.

What age group would you consider most appropriate for a child to have his/her first camera?

Now that is one talented child! I really enjoyed your article and im not certain i would have picked the 2-4 age group before ready it. We could all take a lesson from the AJR's in our lives and learn to live in the moment and pay attention to the things around us just a little bit more. p.s. im sure it was just a simple mistake he drew a new nose on you :>) (should I add an LOL here just for you?)

Thank you Mira. Yes, he does. He quickly went from people and pets (at 3) to other subjects at 4. (Subjects I would never think of focusing on, especially from the perspective he seems to). I used one of his pictures in my article, The Walton's We are Not but that's O.k. with me. It is a close up of bugs. He loves to borrow my camera on occasion, whenever I set it down actually!!

Ugh...Frugalrvers, I remember the film days!!! It was sooo expensive! I was a lunatic & took so many pictures of my kids, way beyond my financial means at the time & remember having to wait days, sometimes weeks to have the money to pick them up. It drove me crazy! None of my children really have the passion I had for capturing moments on film so it delights me that my grandson has it! (He will not accept subject suggestions & only shoots a picture of what catches his eye, which really makes the results truly his own!) I agree with your technolgy point of view but sometimes by accident (We are not the Walton's but that's o.k. with me) I come to realize it isn't all negative. I appreciate your praise of this article and I am sure your daughter will achieve her goals and success with professional photography if that is what she pursues! And who knows, maybe she would still like a Fisher Price-if only to look at, they come in Pink!!

He seems to have an eye for composition as well. Pretty amazing! Great article! A camera would be such a great tool for a child as he/she discovers the world.

I love the small moon too Wisefool. He does seem to have a natural talent and I was initially surprised by the fact that after his 1st 20 or so pictures (very much at an angle!) he figured out on his own how to get it the way he saw it. He's funny because after he stops and take a picture of whatever he wants, he continues to stand there and review it in the camera. If a see a smile, I know we are going to continue on our way...at this point he claims he is goaling to be an animal rescuer, have his own "habitat" for his animals to be safe in, & that will be his job! At 7 however, I wanted to be a U.S. Prosecutor and I would rather fall in a deep well than have that as a career now....maybe a defense attorney but never a prosecutor! Maybe a wildlife photographer...He likes to write "stories" as well.

This is such a fantastic article - and how true! Seeing the world through a child's eyes can open our own eyes much wider. My daughter (who is now passionate about pursuing photography as a career) LOVED cameras. Unfortunately, when she was young, it was all about film - there wasn't digital. Given her desire to take a picture about every 3 seconds, this quickly became an expense we couldn't keep up with (plus developing, etc.). How I wish they had digital children's cameras when she was young! I'm often busy discussing topics about how technology has taken so much from today's children...but in this case, it is a wonderful example of how technology can do so much good! I would definitely buy one of these for her today (but she is a little old for a Fisher Price camera, will be 19 this year!).

I love the 'small moon'. I'm fairly sure I didn't take such good pictures with my first and second cameras. In fact, I think lots of them were at awkward angles with most of the subject cut off!! Your grandson seems to have a real natural talent. Is photography something he's keen to do when he's older?

Box Tops for Education Make it Easy to Support Your School

There are many fundraising opportunities open to the general public that will... 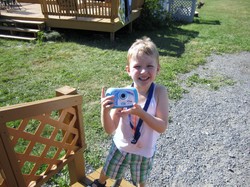 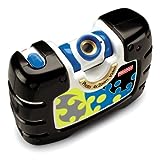 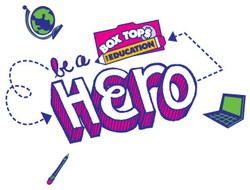 Box Tops for Education Make it Easy to Support Your School

There are many fundraising opportunities open to the general public that will benefit education and our local schools. It's simple to participate if you understand the programs.
100%  12   8 dustytoes
Road Trips with Kids