A day in a Floral Marquee

I spent a day working on the National Vegetable Society stall at the Tattton Flower Show, where I had a lovely day in the marquee for plant societies and heritage.

The Tatton Flower Show in Cheshire is considered one of England's elite flower shows. Last year I wrote about the show in general, but this year I have decided to focus on my experience in the marquee for Plant Societies and Plant heritage. Indeed I was so busy that I had no time to see any other parts of the show, but the day was a very positive experience, manning a stall at which my society had won a gold medal yet again. I met many lovely people and I had only positive experiences.

There are some days that stand out in your memory, and July 27th 2017 was one of them. It was a day when everyone I met was pleasant. I was in Cheshire at the Tatton Flower Show, in the marquee for national plant societies and plant heritage, which provides stalls for  certain organizations that specialize in specific plants. My role was as usual to spend a day as front of house for the National Vegetable Society, Manchester Branch,which won its thirteenth consecutive gold medal that week. It was my second team gold medal with them [third overall.]  My job was to meet the public and talk about horticulture. To be fair to all members, show days are rationed, and I could only have one of them, but we all accept that the whole team must have a go at the show.

Look at the picture below and you see a section of our gold medal winning display of vegetables. A great deal of love, commitment and skill went into that. I am not one of the growing team, for that is selected from elite growers who have earned their position; my role was mainly in construction of the stand and the display. I am not a senior member of the team. In fact, it was only last year that I was invited to take  part and must slowly step onwards, learning display skills from experienced people.Already I have learned much about displays, and as visuals are not my best point, the experience has been valuable. But the society uses its members' skills, and they want me as a communicator.

What struck me was the sheer niceness of the people that I met.All were appreciative of the beauty of the display, but while men tend to give congratulations, women are more effusive, saying how lovely the display is,  but British males are known for their sangfroid. Many visitors said how well-deserved the gold medal was. I met a lady who turned out to be a head gardener at a private manor house in the South of England, whose owners come only for the summer, as they spend winter in warmer climes. I think that she was here on business, buying plants for the manor garden.We had a good conversation about women in gardening and I told her about my Wizzley article on the first women professional gardeners. Hopefully this has found Wizzley a new reader.

Children and people in wheelchairs also came, and I  am always glad that the wheel-chair bound can enjoy a good day out. I ensure that they can get as close to the stall as possible. Children usually want to know about the giant vegetables, so I spent some time explaining to them how to grow extra-long carrots. Their interest is a year on year matter, it will be the same next year. But some people come to us to ask about gardening problems. I can solve most, but occasionally, as happens in Horticulture,  advice from other team members  is useful. On woman was puzzled by a carrot grown in a tube that had spiraled round the tube. This baffled us until we realized that the growing tip must have been twisted!

I went over first to see the British Sweet Pea Society stand, whose stall is fronted by the picture of its founder, the heavily bearded Victorian head gardener who first cultivated the sweet pea, Henry Eckford. This stall won a silver gilt, one step down from gold, but I was seeking my old pal, Barry Eckford, whose picture also adorns the stand. Barry is the great grandson of Henry, and he has continued the long family tradition of sweet pea growing,winning prizes for some of his offerings. He does not sport the patriarchal beard of his ancestor! But Barry was not at the stall that day. Even good days have small disappointments!

The cactus and Succulent Society  also won a silver guilt. I must admit that we all have our own specialist areas in horticulture, and cacti and succulents are not mine. The people on the stall, whom I had met during the build up period before the show started,  were very friendly so I had already had a preview from a rather nice lady. There were some very interesting  plants indeed, some quite strange looking, but cacti are not native to my land and are only grown in controlled conditions. An interesting experience!

We cannot miss the Alpine Plant Society, who won silver gilt as well, but who were genuine in congratulating us on our gold.  Their raised bed, which they bought from someone who had used it at the prestigious Chelsea Flower Show, the UK's premier flower show, was composed of beautifully varnished wooden briquettes. But it gave me ideas for my allotment, as I want more raised beds. The lady who staffed the stall was a jovial and friendly  character who managed to socialize  with all the adjoining stallholders. You got the feeling that she was one of these people who have stayed young at heart.

The British Cactus and Succulent Society

I have not covered every society in the tent, for  reasons of brevity, but there are a few others that I want to cover. I spoke to the founder of the Cottage Garden Society, a thoroughly pleasant gentleman who was keen to  have his society mentioned on Wizzley. He had founded it thirty or so years ago and had taken the society a long way.  I was impressed with the lovely flowers, that reach tall above the ground, as cottage garden flowers should. Mauve contested with white in the abundance of the garden,and a rich variety of shape added to the beauty, a wonderful example of the cottage garden style.  Silver gilt was an apt award for this lovely garden, and the founder well deserves the medal, as do his people.

I did not have time to speak to the British Chrysanthemum Society, but they had a display in two parts, one set of tables with single flowers and small bunches, as you can see in the thumbnail above, and the main stall, which contained a display made of chrysanthemums.  This garden won gold as well as we did. It was very enjoyable

The North of England Orchid Society created a garden of Madeira, using orchids found in that island. It was very impressive, and you felt a real sense that you were looking into a tropical  forest replete with beautiful orchids and palms.

Last, but not least we come to the British Beekeeping Society who won not only gold, but best in marquee. Not only was the display excellent, but the importance of bees to nature gave it some weight that other displays could not match. A hive surrounded by nectar-bearing flowers and many a leaflet telling of the threats to bees and how to protect them swung the top award with the judges. There was no jealousy, I have been part of a best in show garden myself, so others can have their turn.

Bees and their flowers

Yesterday was a good day, when I met many good people peacefully enjoying the combination of nature and human artifice. Of course there were problems, but they were not down to ill-will. I had to call security to check on some small wind damage to the marquee [a hook at the top had come unattached] but it was very minor and it could have been worse on a day when the weather was bad, as yesterday's was,with gusty winds and heavy rain at times.   But we were under cover most of the time and were not affected.

I had taken my trusty walking staff, a sturdy pole of Irish hazel, with me, for I have had  some back problems and would have been in pain had I stood unsupported all day, for my role in dealing with the public involves standing and talking, a great deal of it for many hours. The walking staff was a great benefit, for I could lean on it, and when the day was over my back felt quite well,enough for me to lift two half paving slabs today when working my own allotment, with no damage at all other than a bit of tiredness.

There will be one or two minor shows in August, but I am likely to be away, and the planning for Tatton will start again in September.  But there are goodbyes and welcomes. John, the inspiration for the team, who has won thirteen golds, is over eighty and is stepping back to a supporting role. His place is to be taken by Sandra, his deputy, who already does much of the organization. As with nature, the cycle goes on.

Sorry Derdriu,I don't know the reason. But I think that as every year the societies want a new theme,a new design is attractive so the society chose a place rich in orchids, and that in this case this was Madeira.

FrankBeswick, I remember reading in tennis player Arthur Ashe's autobiography that he particularly treasured his visits to England because of the flowers and the manners.
It's difficult to choose among all those beautiful photos even though the vegetables are particularly mouth-watering to look at. Do you know why the Orchid Society chose Madeira's flora?

I am pleased you had the fortune to be able to visit other displays. Indeed, all were beautiful.

As fresh local food becomes more popular, many people are growing their own v...

Try something a little different - photos and information for growing peanuts... 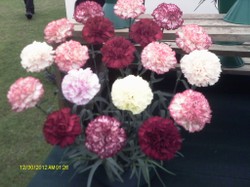 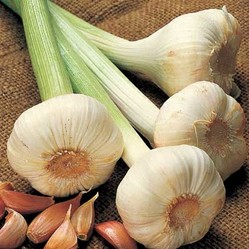 As fresh local food becomes more popular, many people are growing their own vegetables and herbs. Growing garlic is easy in many climates, and can be used in a variety of recipes.
90%  5   11 GonnaFly
Vegetable Plants 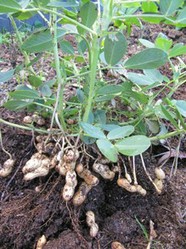 Try something a little different - photos and information for growing peanuts in your own garden.
Loading ...
Error!