A History of Cocoa

The cocoa nut has been cultivated for at least three thousand years. For most of that time it was a chief ingredient in drinks along with vanilla and mamey seed.

This is yet another Mesoamerican crop. The entire fruit is not eaten, though in the beginning the pulp or white fleshy substance between the beans was the object of harvest, not the beans themselves. This fleshy tissue was used to make an alcoholic drink, but sometime in the first hundred or so years, people turned to the bean as the primary object of harvest.

For most of its pre-columbian history, cocoa was grown solely for the purpose of making a drink. This drink consisted for crushed, roasted cocoa bean, corn meal, vanilla, and mamey seed. It is said that Montezuma II (or Moctezuma the Younger) drank up to sixty cups of this concoction a day from a golden chalice.

The botanical name of this plant is Theobroma cacao. In Greek, Theo means “god” and broma “food,” so the botanical name means “god food” or “food of the gods.”  In Spanish the name derives from the Mayan kakaw which itself is derived from the Nahautl word cacahuatl. In this instance the Spanish sounded out the Mayan word and came up with cocoa or cacao.

The cocoa bean is not actually a nut since its source is a pod shaped fruit. As the cocoa pod has anywhere from thirty to forty beans per pod, they are seeds not nuts as a nut is a single seed within a fruit. A pound of chocolate takes three hundred to six hundred beans depending on the size of the beans. The cocoa plant was given its botanical name by Carl Linnaeus, a Swedish botanist, in his seminal work Systema Naturae. The work was published in the mid-1700s. It is interesting that Linnaeus named it “food of the gods” at a time when it was virtually unknown in Europe. Cocoa trees must be grown within 20° north or south of the equator. This area is typically known as the “tropical belt.”  Since it’s exportation out of the Americas the cocoa tree is grown, for profit, in the Ivory Coast, Ghana, Indonesia, Nigeria, Brazil, Cameroon, Ecuador, Dominican Republic, New Guinea, and Malaysia. The Ivory Coast produces as much cocoa as the next six countries combined.

It takes roughly three years from planting for a cocoa tree to bear fruit. The tree will bear fruit for approximately fifty years. The berries grow from the trunk rather than branches. They are six to twelve inches long and three to five inches in circumference. This is a year-round crop, with no set growing season. The cocoa pods are harvested individually and ripeness is determined by color. Harvesters must take care to cut the pod from the tree at the stem without nicking either the tree or pod.  Once harvested, the pods are opened and the beans and pulp scooped out. Beans are then cured for about three days (called fermenting) and then sun dried for another four. At the end of that week they are then ready for roasting.

The plant, as a domesticated crop, is thought to have originated in the Amazon River valley around present day Venezuela where wild varieties still grow. At some point the Olmecs (1500 BCE to 400 BCE) domesticated the plant by at the latest 1500 BCE.  However, there is evidence that the plant had an important role prior to the Olmec rule. Archeological digs have turned up dried cacao residue in clay pots, which the Mokaya people used in present day Chiapas, Mexico. Chiapas is just north of the Honduran border.

Before the arrival and conquest by the Spanish, cocoa beans were treated as currency.  Also, both the Maya and Aztec cultures used cocoa in religious rites where cocoa seeds were offered to the gods during ceremonies. In these ceremonies high status participants drank a chocolate drink called Tejate. During the Aztec reign any region that grew cocoa was expected to pay a tribute to the empire in the form of cocoa beans.

The Spanish took the cocoa seeds and some immature trees with them and introduced cocoa to Europe. Eventually the plant became a cash crop in the West Indies and Philippines. From there Europeans took the cocoa tree into West Africa and the rest of Asia. By the mid-1700 it was gaining popularity in Europe though it’s consumption continued to be in drink form, though Europeans added milk to cut the bitterness and sugar to sweeten it. In fact, chocolate cocoa was a drink until the early 1800s when John Cadbury hired a confectioner named Frederic Kinchelman who had mastered a process of creating a creamy chocolate (cocoa powder, cocoa butter, milk, and sugar) that could be used to cover various items.

In 1828 Coenraad Van Houten, a Dutch chemist, developed a cocoa press that separated the cocoa solids from the cocoa butter. This was a huge step forward in chocolate production where controlling the ratio of these two ingredients vastly improves the chocolate.

A company named “Fry’s” produced the first chocolate bar in 1847. In 1879 Cadbury produced a milk chocolate bar made with liquid milk, but their process was still not quite as sophisticated as Daniel Peter’s bar which used powdered milk. Unfortunately for customers, both processes produced gritty, grainy chocolate. 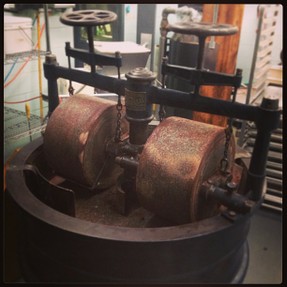 In 1879, in Berne, Switzerland, Rodolphe Lindt invented the "conche" machine. The machine, through a process of crushing, polishing, and imparting heat, released “volatiles,” and produced carmelization, and oxidization of the chocolate. The result was  superior aroma and melting characteristics. Conching is used with both milk and dark chocolates.

In 1894, started a business based on caramel. Hershey had come up with a process of adding milk to the caramel which was very successful. By 1903 Hershey had sold off his caramel company to concentrate on chocolate bars. When asked about the switch Hershey is rumored to have said caramel was a passing fad and chocolate a permanent thing.

Though Hershey’s process remains a trade secret, it is thought that the milk is put through lipolysis a process that breaks down the milk fats into simpler fats. This makes the milk stable and imparts a slight tangy flavor. With this process Hershey found a way to stabilize the milk in his milk chocolate. This made the process of making chocolate, in particular milk chocolate bars, much more cost effective. Hershey is sometimes called “The Henry Ford” of chocolate.

Chocolate from cocoa is a machine intensive process. It requires many steps and very carefully controlled conditions and timing to produce the smooth creamy chocolate we expect today. Cocoa has come long way from the hand-made drink of Moctezuma.

The Aztec used cocoa beans as currency. An extract of cocoa has been found to be more effective than fluoride in strengthening tooth enamel and preventing decay. Cocoa butter is an excellent emollient and moisturizer. Some skin experts feel that anything you put on your skin should be edible to be healthy enough for your skin. Finally, cocoa contains flavonols which improve blood circulation throughout the body.

Such an interesting bean, cocoa is a healthy additive 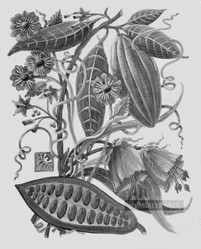