A History of Corn

Maize, the actual name, though not the oldest mesoamerican food, is probably the most modified (in both prehistoric and historic times) plant of the ancient past.

The Zea grasses grow wild in present day Mexico, Guatemala, and Nicaragua and have for thousands of years. In the Andean region of South America, maize was a staple food along with squash, potato, quinoa, beans, and amaranth. In many mesoamerican cultures maize formed an important part of that people's identity. So much so that it was treated with an almost god-like reverence. 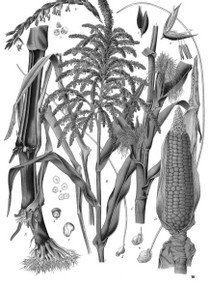 The word “Maize” is another Spanish attempt to pronounce a Mesoamerican word after the Taíno’s (a Caribbean people) name for the plant, mahiz. Though it is also known as corn that word actually refers to the kernel not the entire plant.  Because maize is basically a grass, it grows long stalks, up to eight feet tall, with seed clusters called ears.

These ears are the source of the grain referred to as corn. Maize kernels are used in cooking as a starch and also as a form of flour when ground to powder. Recently it has also been used as a source for ethanol via fermentation. This later use puts it in the category of bio-fuel. The Olmec and Mayans cultivated it in numerous varieties throughout Mesoamerica. These people cooked, ground, or processed the grain through soaking the dried grain in an alkaline broth. This alkaline treatment released niacin, making the resulting food more nutritious than the raw grain.

Though it was likely developed in Mexico as a domesticated plant, by about 2500 B.C.E., the crop had spread throughout much of the North, Central, and South America. However archaeologists and ethnobotanists think maize domestication began between 7,500 and 12,000 years ago.

The region developed a trade network based on surplus and varieties of maize crops. The Mayans gave it religious importance and, as a people, identified with it.

When Mesoamericans planted maize they did so in hilly regions. The most popular planting technique is named the “three sisters” method; maize was grown along with beans and squash. The Maize provided a climbing structure for the beans, the beans fixed nitrogen in the soil, and the squash provided a barrier to insects and also helped shade the soil and prevented evaporation. Because maize root structure is so close to the surface this last is very important to a successful crop.

The Mesoamericans did such a good job of creating a plant with large ears that modern cultivators concentrated on improving the productivity of the maize and not changing the corn grain itself.  In the 1860s James L. Reid came up with a dent corn variety with improved productivity (more ears per stalk). C. G. Hopkins ca. 1896 and then D. F. Jones ca. in 1918 and 1922 improved production further.

Maize is often planted in a “two-crop” rotation where alfalfa or soybeans are grown, the “tailings” plowed under, and then maize grown at the start of spring. The alfalfa and soybeans take the place of the aboriginal Americans sewing beans along with the corn; these two crops fix nitrogen in the soil which the maize will take up while growing.

Before World War II maize was picked by hand, but shortly after the war the maize combine started seeing widespread use. This machine separates the ear from the stalk based on the difference in diameter of these two parts of the plant.

Starting in 1997 maize became one of the twenty-five genetically modified crops.  In the case of maize the plant has been engineered to 1) resist insecticide sprayings and 2) generate a (BT) toxin that is fatal to the corn root worm and a wide variety of other insects.

This last has been very controversial around the world including the United States. Concerns include safety, ecological, and economic concerns. One concern is that the long term effect of BT Toxin on humans is unknown, another is the potential to alter the nearby ecology, and yet another are the legal issues raised by the fact that genetically modified corn is patented and subject to strict intellectual property laws.

Maize is grown both to be consumed off of the cob and also as a grain to be ground into a flour, meal, and groats (or grits). In Mexico is used in virtually every dish. Other names for corn based products include tortillas, tamales, pozole (a soup), atole (a drink), tacos, quesadillas, enchiladas, and tostada. In Italy it is prepared as a very thick porridge called polenta. In Africa it is the base for many popular dishes. Maize meal called Masa is treated with limewater and finely ground as the base for flatbreads and wrapped foods.

Maize can also be prepared as a dish called hominy in the southern U.S. A variety is also grown for pop-corn. Boiled, mashed, and pressed kernels are the foundation of corn flakes. In South America an alcoholic drink called Chicha is made with corn. Canjica, a Brazilan dessert, is made by boiling whole corn kernels in milk with sugar and cinnamon added.

Only 1/40th of the corn crop in the U.S. is used for food with the remainder used as silage (livestock feed), feed, or forage. Maize is also a major ingredient in dog food.

Corn starch can also be processed into plastics, fabrics, and adhesives.

I had no idea so much corn was grown in China. Good article. 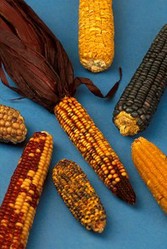 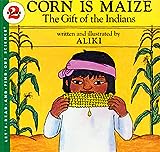