A History of the Avocado

Many of the foods we eat today were pioneered in the darkness of prehistory. Because of this we will never know, for example, who discovered the avocado and deemed it good to eat.

The name derives from Spanish for “advocate” or “lawyer.” An attempt, by the Spanish, to deal with the Nahuatl word that they could not pronounce. As with so many Mesoamerican foods, the Spanish named it based on the sound of the native Nahuatl word "ahuacatl." The Nahuatl word is one used to identify a particular male body part, the testicle. The avocado is a member of the laurel family. Its botanical name is Persea americana; “Persea” having to do with Perseus of Greek legend, and “americana” having to do with the continent of origin. The “Persea” designation may have been due to a botanical misidentification with a similar, but unrelated, plant in Africa called Persea indica.

Botanically the produce of the tree is indeed a fruit, a single seeded berry that is the result of fertilized flowers. So, though it tastes like a vegetable, it is actually a fruit. As with any berry the plant requires pollination to bear fruit.

The tree is an evergreen related to bay laurel. It is a warm weather tropical plant that does not tolerate frost and must have a humid climate to flourish. Interestingly, an avocado fruit does not ripen until it is picked from the tree. This is a boon to avocado farmers who can leave the produce on the tree for up to seven months, thereby controlling, at least partially, when to harvest the crop for shipment. Like bananas avocado ripen faster due to the presence of ethylene gas, so ripening can be hastened by storing the fruit in a brown paper bag.

The common name, avocado refers to both the tree and the fruit.

The avocado is thought to have originated in the state of Puebla, Mexico. It has been grown in the Mesoamerica for at least 10,000 years. Evidence of this was found in a cave in Coxcatlán, Puebla, Mexico.

There are at least 500 varieties of avocado. The fruit was eaten by itself or as part of a recipe for a soup or sauce. This becomes obvious with the Nahuatl word ahuacamolli  for avocado sauce (or soup). Note that the Spanish word molé is very similar to the Nahuatl word molli (above).  The plant is very resistant to diseases, though it can fall victim to a mold called Phytophthora which is water-borne and attacks the roots.

In the early 19th century the avocado was introduced to California from Mexico. Perhaps the two most popular cultivars of avocado are the Haas and the Fuerte.  The Fuerte (Spanish for strong) was so named because it is frost resistant. The Fuerte tree is originally from Puebla, Mexico, the home of the avocado. The other is Haas, named for Rudolph Haas (pronounced hass), who patented the fruit and tree from one grown on his land in La Habra Heights, California in 1935. 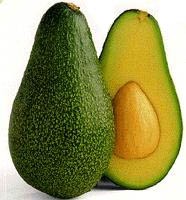 The outward difference between the two is striking, but they are both frost tolerant. Interestingly enough, though the Fuerte is a Mexican variety, it remained popular in California until the mid-nineteen sixties. The Haas, on the other hand, was popular in Texas and the south-eastern U.S long before gaining popularity in California, its home state.

The Fuerte variety has a smooth skin and remains green through ripening. The Haas variety has a rough skin and darkens to near black when ripened. Both have the flavor avocado is famous for, though the author finds the Haas more flavorful. This, of course, is subjective. 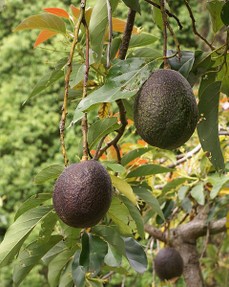 The fruit of avocado cultivars is high in mostly monounsaturated (so called healthy fats) fats. This fat content is roughly 25%. This makes it a popular edible for people who have limited access to meat, fish, and milk. Because the fruit has a rich flavor and texture (known as butter fruit in India) it is often used in both savory and sweet dishes.

The avocado is typically served raw. It is also the base for a Mexican dip called guacamole. In the Southeast Asia and parts of South America the fruit is used in milkshakes, typically added to ice-cream and milk. In Vietnam and the Philippines it is the main ingredient in a drink made with the fruit, sugar, chocolate, and water.  In Morocco the fruit is the main ingredient in a drink which also includes milk, sugar, and orange water.  In Ethiopia, avocados are pureed into juice and mixed with sugar and milk or water; usually served with a slice of lemon.

In Australia, The United States, and New Zealand sliced avocado is served in sandwiches, sushi, on toast, or with chicken. In Ghana, it is eaten in sliced bread as a sandwich. In Sri Lanka it is completely mashed with sugar or treacle, and milk, as a popular dessert. In Haiti it is frequently consumed with cassava or regular bread for breakfast.

In Mexico and Central America, avocados are also served mixed with white rice, in soups, salads, or on the side with chicken or other meat. In Peru, they are consumed with tequeños (a cheesy breadstick) as a sauce, served as a side dish with parrillas (bar-b-que), it is also an ingredient in salads and sandwiches, or as a whole dish filled with tuna, shrimp, or chicken. In Chile, it is used as a puree with chicken, hamburgers, and hot dogs. A Chilean version of Caesar salad contains large slices of mature avocado. In Kenya and Nigeria, the avocado is often eaten as a fruit mixed with other fruits in a fruit salad, or as part of a vegetable salad. In Iran, it is used as a rejuvenating facial cream.

In one episode of Alton Brown’s culinary program “Good Eats,” the host made avocado ice-cream.

The Avocado is versatile in that it can be used either as a savory or sweet ingredient in dishes. In Portuguese speaking countries, such as Brazil, it is often used in deserts. In Spanish speaking countries sweet avocado dishes are unheard of, where the fruit is used as a vegetable.

On Rudolph Haas’ Efforts to Introduce his Avocado

Rudolph Haas was a postal employee in LaHabra Heights, California in 1926. Haas acquired and planted three seeds he had bought from A. R. Rideout of Whittier, California. Of the three seeds only one yielded a strong seedling.  Haas tried twice to graft Fuerte fruit-stock to his tree, but the attempts failed. Though Haas considered cutting down the seedling, a professional grafter named Caulkins told him the seedling was quite strong and he (Haas) should let it mature. Within a few years the tree began bearing leathery skinned fruit (an oddity with avocado) and his children liked the taste. Over time the tree yield grew substantially and he sold what his family did not eat to co-workers at the post-office. 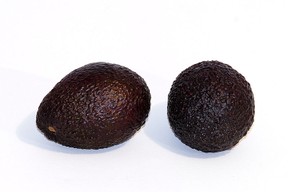 Eventually the Haas avocado became a commercial success at the Model Grocery Store on Colorado Street in Pasadena, California. Wealthy residents of Pasadena were treated to the expensive cultivar ($1 each or $15 per fruit in today’s dollars) by their private chefs.

Rudolph Haas patented the tree in 1935 (a first) and contracted with Whittier nurseryman Harold Brokaw to grow and sell Haas graft seedlings. Brokaw made 75% of the proceeds. This was a profitable deal for Brokaw because, unlike the Fuerte, the Haas produced fruit year-round. Haas himself made $5,000 on the deal.

Haas continued as a carrier for the post-office. He died of a heart attack in 1952, the same year his patent expired. Almost half the commercial cultivars of avocado are based on the Haas variety. In this, the 21st century, the US avocado industry grossed over one billion dollars a year from the high-bearing, quality Haas cultivar. The Haas now accounts for roughly 80% of all avocados grown worldwide.

The avocado, because it is susceptible to fungus, produces a naturally occurring fungicide called Persin. It is generally harmless to humans, but can be deadly to birds, rabbits, cows, goats, horses, dogs, and cats. Interestingly Persin, in the lab, has been found to kill breast cancer cells. It has also been found to enhance the effects of tamoxifen. Persin is produced in the pit and migrates to the flesh of the fruit.

The avocado is also known to produce allergic reactions in people who have seasonal reactions to pollen. It can also cause reactions in those with allergies to latex.

I love them. I'd eat nothing but if I thought I could get away with it.

Interesting. Thank you for sharing, LiamBean! I learned quite a few things :)

They take years to mature enough to bear fruit. I've always been tempted to grow one, but to be honest I don't know what I'm doing. :-)

I'd love to have my own avocado tree in my back yard, Ohio isn't the climate for it. :)K