A History of the Potato

There are many things we eat in the modern world that were pioneered in the deepest shadow.

We will never know, for instance, who consumed these foods because almost all of the real alterations were made before written history.

"O Creator! Thou who givest life to all things and hast made men that they may live, and multiply. Multiply also the fruits of the earth, the potatoes and other food that thou hast made, that men may not suffer from hunger and misery." — Incan Prayer 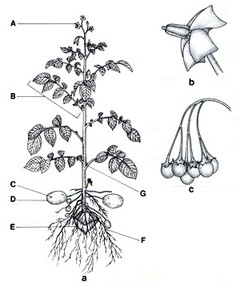 The potato is a member of the nightshade family. Its botanical name is Solanum tuberosum, Solanum having to do with “soothing” and tuberosum having to do with bulbous roots. The soothing part of this designation is thought to have come about because some of the chemical compounds in the potato have a soothing effect.

The potato is also related to the tomato, eggplant, and tobacco plant.

The potato has been grown in the Mesoamerica for 8,000 to 10,000 years. Though the Andean Mountains are clearly the birthplace of the potato, most world cultivars are based on a Chilean version grown near the north-western coast of Chile. This version is at least 8,000 years old.

There are at least 5,000 varieties of potato which allow the Andean people to avoid crop failure due to such problems as insect infestation and fungal attack. By growing so many varieties the people are assured that no substantial portion of the total crop will fail due to disease. Of these thousands of cultivars, some are grown at higher altitudes than others. The Andean people were/are so connected to the potato that in working with the plant, they have stored them for times of famine or war, and freeze dried a frost resistant variety for re-hydration and use in soups and stews.  Some valleys can contain as many as 1,000 different cultivars with individual families growing as many as 12 different varieties.

A particular potato “product” called chuño is grown at very high altitudes and produces more of the toxins associated with the potato; however, processing this tuber into a freeze-dried form removes those toxins. The process of freeze-drying takes five days and it also performed at high altitude. The completed chuño retains all of the nutritional value of a fresh potato. To restore it to edible condition it only need be added to a water.

Even today Chilean and Peruvian farmers grow wild cultivars alongside their traditional crop in order to take advantage of beneficial variances in the wild crop. This goes a long way in explaining the astounding number of varieties.

The Potato in Historical Times

In 1540 the Spanish brought the potato to Spain from present day Peru. Over time it served as a citrus replacement when Spanish captains noticed that sailors who ate the raw potato did not suffer from scurvy on the long voyages.

In 1597 a British botanist named John Gerard began growing the potato in his garden primarily as a decorative plant. This was a variety brought from Virginia so Gerard referred to it as a Virginia Potato even though it is almost certain to have originated in South America. Meanwhile the potato traveled from England to Italy in 1585, to Belgium and Germany by 1587, to Austria by 1588, and finally to France in 1590.

For a variety of purely fanciful reasons, the French rejected the potato and at one point, through the machinations of the Academy of Besancon, banned the growing of it. Claims were made that it caused leprosy. In 1588 the Irish recovered flotsam from a Spanish ship which wrecked off the coast. Some of the potato samples it carried had washed ashore.

The Irish took to it immediately and it grew on that island from that point forward, even well after the potato famine of 1845. (see below)

Back in Europe, in 1771, a French scientist named Antoine-Augustin Parmentier, of the Academy of Besançon, gave the potato a reprieve when his examination of the tuber proved that the potato could supply both the starch and the nutrition needed by humans. In fact, he determined that a potato and a serving of milk would provide complete human nutrition in one meal.

It was no coincidence that Parmentier had been taken prisoner by the Prussian army five times during the Seven Years' War (1756-1763) and given only potatoes and water. This period of incarceration informed his scientific research. Today many French potato dishes are named in Parmentier’s honor.

By 1845 the Irish population had doubled, primarily due to the potato, and through 1849 the Irish experienced a 40% failure of the potato crop. Though unknown at the time, the failure was caused by fungal spores spreading across the island. The spores are thought to have originated in South America and carried there on a ship that had just made port. A “perfect storm” of conditions made Ireland the perfect incubator for this fungus and it quickly spread across the island. In five days time any potato plant so infected began rotting in the ground. Many of those harvested, though looking edible, later fell victim to this parasitic fungus while in storage. Because farmers left the rotting tubers in the ground, the fungus resurrected yearly, for the next four years. The blight caused at least one million deaths from starvation and or disease, and caused another one and a half million to leave Ireland to immigrate to the United States.

In North America, by the 1850s, the potato was grown nearly everywhere, but still almost exclusively as cattle fodder. 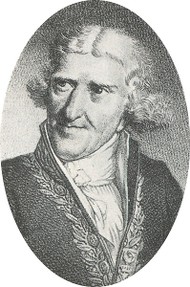 Despite having proved the potato a healthy food item in his research, Parmentier met with stiff resistance. Because of his efforts, the Paris Faculty of Medicine deemed the lowly potato edible in 1772 one year after Parmentier released his findings.

However, this did not sit well with the Catholic Church (the potato is not mentioned in the bible), and Parmentier was prevented from even using the test garden at his post. Repeated complaints by hospital authorities resulted in the “suppression” of Parmentier's post at the Invalides and he eventually resigned.

Parmentier was not to be censored though, he began a series of publicity campaigns for which he remains famous in France.

He hosted dinners which prominently featured potato dishes. His guests included Benjamin Franklin and Antoine Lavoisier. He gave bouquets of potato blossoms to the King and Queen. Parmentier also posted guards around his potato patch. He encouraged his guards to accept bribes from anyone and everyone and at night he would remove the guard thus encouraging theft.

The potato, like the tomato, naturally contains toxins that are in higher concentrations in wild varieties of this plant.

Mesoamerican people likely spent hundreds if not thousands of years breeding out the deadly toxin leaving their domesticated versions safe to eat.

These toxins, compounds known as glycoalkaloids, include solanine and chaconine. Both these compounds are known to cause confusion and weakness and in excess quantities can even cause coma and death.

Glycoalkaloids can cause headaches, diarrhea and cramps. Thanks largely to the food pioneers of South America, an unknown group of farmers, poisoning from potato is such a rare event that there has been no records of such a mishap happening in the last fifty years.

Regardless a potato should not be eaten if it shows any green in its skin. In no case should potato flowers, leaves, fruit (berries) or stalks be eaten. They contain dangerous levels of the above mentioned glycoalkaloids.

I really enjoyed that, thank you. I know it was also banned in Burgundy at one point, because it apparently looked like the goddess Venus, or something like that. I really should look things up before telling you half a story! 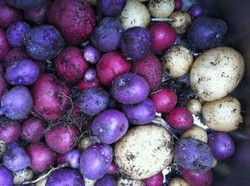 Potato: A History of the Propitious Esculent
100%  23   9 sockii
Easy Recipes