If you're a fan of cave paintings, and particularly of bison, the Altamira Cave in Spain is the place for you!

What's special about this Altamira Cave? The Altamira cave, like the Lascaux caves in France, is famous for the numerous prehistoric cave paintings that adorn its walls and ceiling. In particular, Altamira is known for its "Polychrome Ceiling" which features a herd of bison in different poses.

The cave paintings at Altamira in Spain helped change our understanding of life in the Paleolithic period. Prior to the discovery of these magnificent artworks the prehistoric beings of this period had generally been depicted as basically pre-human rather than real human beings. Discoveries of their art in the caves of Altamira were an important contribution to changing this perspective and recognizing the significant human qualities of these early people.

Unfortunately, like the caves in Lascaux, Altamira caves are not open to the public, a necessary measure to protect the magnificent artwork. However, there is a museum and several replicas of the caves which allow visitors to view reproductions of these amazing artworks in context and have a taste of what life for these early artists must have been like in prehistoric times.

Discovery of the Altamira Cave and its paintings

The Altamira cave had been sealed by rocks for goodness knows how long, thousands of years anyway. However, sometime in the mid-nineteenth century a falling tree dislodged the rocks and the cave became accessible. At first local inhabitants of the Cantabria region in Spain where the cave is located just used it for shelter in bad weather without noticing the artworks. Finally, in 1879 an amateur archaeologist, Marcelino Sanz de Sautuola and his daughter Maria saw the images of animals on the ceiling of the cave. Sautuola had seen similar images on Stone Age objects before and realized that the pretty animals his daughter had found might be of an similar age.

Sautuola returned to study the cave with University of Madrid archaeologist Juan Vilanova y Piera, and were greatly excited by their findings. However, their 1880 publication was met with scorn and ridicule by specialists in the field. The incredible artistic quality of the paintings coupled with their almost perfect state led to accusations of forgery. Sadly, Sautuola died before the academic world recognized the veracity of his claims, including an admission of misjudgment by the most vocal critic in 1902. Today, though, no-one doubts that the paintings in the Altamira cave were created by people of the paleolithic age, around 15,000 to 18,000 years ago, as Sautuola believed.

Today, to protect the paintings, the caves are closed to all except a few experts. Replicas have been built together with a museum near the site, though, allowing the public the experience of viewing these images as their creators saw them.

The artworks at Altamira are outstanding in many ways. They are incredibly beautiful, even by contemporary standards. They are polychromatic, with wonderful use of colors derived from natural dyes available to the artists. These artists exploited the natural contours of the cave walls to give a three-dimensional effect to their images which gives an immediate impact to the viewer. Interestingly, the caves were used for habitation and there is much archaeological evidence of human occupation in the front section of the caves, and the artworks extend into this occupied area.

The Altamira cave paintings include a whole herd of bison as well as a few images of other animals including horses, a deer, and goats, as well as a number of human handprints. The latter were created by the artists placing their hands on the wall of the cave and covering them with paint which left negative images of their palms.

Great book on the Altamira Cave

Since Altamira cave is now restricted to protect the paintings, this wonderful book with beautiful detailed photographs by Pedro Saura Ramos offers an excellent visual experience to "armchair visitors." Sauro Ramos' photos are unusual with the camera held in non-conventional ways producing angles not normally seen in print. The photographs are just magnificent and they capture both the beauty of the individual paintings as well as giving a clear sense of what it was like to actually be in the cave where they are located through the use of both wide-angled and close-up shots of many of the animals.

In addition to the wonderful photographs, which alone would make the book worth owning, there are a number of excellent essays on the history, layout, content, and "meaning" of the cave which add to the enjoyment of the reader. Basically, this book is the next best thing to actually going there (which is well nigh impossible) or to the replica that anyone can find!

Although the Altamira cave features images of other animals, it is the large herd of bison thundering across the ceiling that captures our imagination the most. Here are some beautiful examples.

More about Altamira Cave and its artworks

What do you think of these paintings?

As a rather weak artist I tried to replicate some cave art figures, but to no avail.They take so much skill and empowering them is very detailed observation of animals.

Thanks for the comment. Yes, I remember Picasso's comment - quite an interesting viewpoint (of course!) and rather insightful.

jptanabe, Thank you for the informative write-up and wonderful product line. Cave art always calls up Marx and Picasso for me. Picasso commented that art has nothing new since the cave artists. In his correspondence with Dr. Kugelmann, Marx conceded that art must be exempted from his criticisms even though so much of it has been realized under conditions of exploitation and misery.

Thank you for your comment! That is a lovely thought that people would add additional magic - all too often they ruin the beauty of nature.

Caves are so interesting, especially when they hide such treasures from the past. I live in an area with many underground secrets, but our caves are beautiful for different reasons, unrelated to human activity. I think a touch of people would add some additional magic here as well. Thanks for all the captivating photos and fascinating comments.

Thank you Frank. I do think it's important to realize that it is art, and art's fundamental attribute is beauty. Of course all the pre-history is fascinating too, and the fact these prehistoric people were artists, creators of beautiful paintings, is surely significant.

Jennifer, what I like about this article is that it appreciates the cave art for its true purpose, for you focus on its beauty and power to impress. This is in contrast to some academic works which deal with the pre-history but lose the beauty of the art.

Good points, Angela. People are selfish! But there may indeed be many more wonders still to be uncovered.

Absolutely agree those paintings of the Buddha should be preserved! The achievement of beauty and sacredness is precious.

I'm glad they have been protected - some people may have tried to chisel some of the artwork and take it for themselves. Who knows what else is waiting to be discovered.

The Bushmen (San) people created thousands of rock paintings in the Drakensbe... 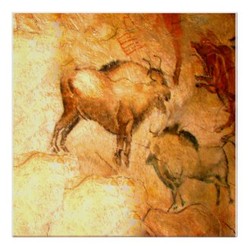 Prehistoric artworks tell us about the lives of people who lived thousands of years ago. These in Cueva de las Manos feature actual hand prints of the artists themselves!
42%  5   4 jptanabe
Painting 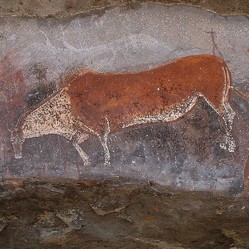