American Curl cats are so named because their ears curl ear-resistibly backward, giving them unusual expressions of joyous surprise or quizzically startled worry.

The distinctive feature which has bestowed upon the American Curl cat its charming, unusual name as a breed is deemed to be a spontaneous mutation which came to the world's attention in June 1981.

On a hot summer day, two stray long-haired cats, both with strangely curled ears, appeared at the home of Joe and Grace Ruga in Lakewood, an instant city developed in the 1950s in California's Los Angeles County. After a few weeks, the black-and-white kitten, named Panda by the Rugas, disappeared, but all-black Shulamith remained. Shulamith became the foundation female for a new breed, which was given the name of American Curl.

Within six years of Shulamith's appearance at the Rugas' door, the breed received unprecedentedly rapid recognition, in 1987, from The International Cat Association. In 1993, the American Curl breed was recognized with Championship status by the Cat Fanciers Association. The unusually swift rise of a stray to feline stardom is a charming equivalent of a rags-to-riches tale in the feline world.

For those familiar with this amiable, playful, medium-size breed, the ascent is well-deserved.

Back story: As if by magic, a new breed appears

On a hot summer's day in June, 1981, feline history experienced an enigmatic pounce as two strays sought shelter at the home of Joe and Grace Ruga in the instant city of Lakewood, newly developed in the 1950s in California's creative mecca, Los Angeles County.

Cat specialists attributed Shulamith's signature feature of curled-back ears to a spontaneous mutation. The ear-curling gene was deemed to be autosomal dominant, that is, inheritable even with only one gene.

In addition to their adorable faces, which are framed so enchantingly by their unusual ears, American Curls abound in attributes.

Attention always ends up focusing on the breed's smile-inducing ears.

Thanks to a wide gene pool, the breed evinces no inherited defects, although care must be taken in cleaning American Curls' ears, for the cartilage may be damaged if force is applied or if folding is attempted.

Pricing of new kittens, generally made available at ages of 12 to 16 weeks by breeders,  is determined by such factors as:

The title of Distinguished Merit is achieved via:

The foundation breeder in the United Kingdom is Claire Winman, who started Overear Cattery for American Curls in 2007:

American Curls make themselves welcome wherever they find themselves.

Published on YouTube on July 22, 2011 by Animal Planet ~ URL: http://www.youtube.com/watch?v=tjDhGwV7tgc

The Cat Encyclopedia by DK Publishing

Offers everything you need to know about cats in one easy-reference volume. Features stunning photographs of cat breeds from around the world combined with expert advice on kitten and cat care, and a celebration of cats in art and culture.

"I'm Purrfect just the way I am"

iggy, Cats won me over, too! I agree: American curl cats have cute ears.

I became a cat person when Sassy came into my life and taught me they have big personalities. The ears are cute on these cats.

WordChazer, "Screaming humans": sad but true and seems to be getting worse!
Kittycat babies are so adorable. I love the way that they're lighter than air. Cats enjoy a lifelong adorability, from kittenhood through cathood.
"And talk in mews": yes! such a charming language.

I agree, Dee. I'd much rather have a world populated by cats and not so many screaming humans. Had altogether too much of Everyone Else's Babies this week...the only babies I'm interested in have four paws, a tail and whiskers. And talk in mews.

WordChazer, That is awful! Ingestion of antifreeze is supposed to bring about a horribly painful death. That is cruelty to animals, which is supposed to be a common trait in serial killers. I hope that the cats in your area are able to band together and elude those nasty people.
Cats are great company, unlike some (or many?) humans. ;-[]
I especially admire the bravery of strays, putting one paw in front of the other, no matter what, despite their shortened lives from exposure to the elements (which, incidentally, affects their mewing) and mistreatment by humans.

Removed to order is my best guess, Dee. Either deliberately targeted for the resale/breeding value of pedigree cats or poisoned because someone doesn't like cats out in nature (messing their garden, scaring the wildlife, eating their fish, threatening their own animals or children). Antifreeze is altogether too popular around here as a means of cat removal. I'd rather have cats than humans...

WordChazer, Do you have any idea of the reason for so many animals "going missing" thereabouts? That is scary, indeed. It's sad to see those "Missing" posters.

I don't think I'd dare have a pedigree cat around here. The numbers of animals going missing is scary, and one as unusual as an American Curl would definitely atract the attention of the wrong type of person.

burntchestnut, American Curls seemingly came out of nowhere, and, despite their rapid acceptance in the hallowed halls of cat registries, they have retained a widespread anonymity among the general public.

I've never heard of this cat breed before. How interesting!

Spots and stripes act as camouflage. They also advise of scented communicatio... 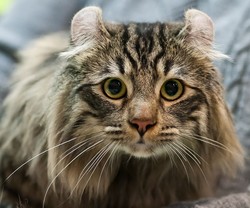 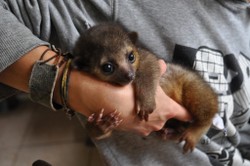 Kinkajous (Potos flavus): Ringtails That Tightrope-Walk Their Own Prehensile Tails 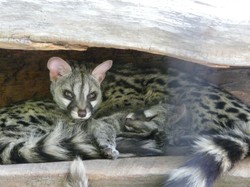 Spots and stripes act as camouflage. They also advise of scented communication and defense. Why else do Africa's and Eurasia's common genets have spotted bodies and striped tails?
Loading ...
Error!