An Unexpected Life: The Story of Seth and Debra Chwast, Autism, and Art

I met Seth Chwast a few years ago, through one of his art teachers. He was the first autistic person I had ever met, and he was already an adult.

Seth Chwast has become a local hero, and is now on his way of becoming known throughout the world. He is an autistic adult who has found a way to express himself through art, specifically painting.

Through his paintings you can see the world through his eyes, which is often vastly different than our own. Autism is a frustrating condition that causes a schism between human relationships, even as basic as the relationship of a parent and a child.

I met Seth Chwast, and later his mother Debra, because I own an art gallery, and one of his art teachers was participating in the gallery for a time. For several months, we showed Seth's work in the gallery, in 2006. Seth's work has developed quite a bit since then, and he has found his voice through artwork. Seth cannot communicate like most people do through regular conversation. He does speak and interact with people, but not in the ways we come to expect. Autism affects every day life in a significant way, but Seth and Debra have found many ways to work around it.

Who is Seth Chwast?

Seth Chwast is a 29 year old visual artist whose works hang in galleries, on the walls of homes and offices, and, perhaps most importantly, in the hearts of many. Seth's creations, after all, are not only works of art, they are a means of communication--sometimes his only means.

Seth is autistic and as Debra Chwast, his mother, documents in An Unexpected Life: A Mother and Son's Story, Seth's diagnosis of autism when he was a little less than two years old was both an end, and a beginning. His story, and hers, and his art have provided inspiration and hope not only for those who deal with autism, but for anyone who faces seemingly insurmountable challenges in life.

An Unexpected Life: A Mother and Son's Story of Love, Determination, Autism, and Art

Autism and Autism Spectrum Disorder cover a range of brain disorders, or differences, that make communication, relating and paying attention difficult. Asperger syndrome, much in the news of late, is one aspect of Autism Spectrum Disorder; others include Rhett syndrome, pervasive development disorder and childhood disintegrative disorder. Though many of the terms are frightening, and some of the symptoms severe, children and adults with autism vary from those unable to care for themselves to those who live full lives, with just a little extra. Some, in fact, may show excellence and promise in math, music or, like Seth Chwath, art.

What causes autism is still a matter of research, and some debate. There are many forms of autism, and perhaps just as many causes. Those in the medical field are increasingly aware of the signs of autism that may come to the fore usually by the time a child is between two and three years old, which can lead to a seeming increase in actual cases. Early diagnosis is important in beginning treatment, but not all children who are late talking, have poor motor coordination and dislike playing with others are autistic. A physician, using a variety of tests and methods, is best suited to make a diagnosis.

Living with an Autistic Child

In An Unexpected Life: A Mother and Son's Story, Debra Chwast does not dwell over-long on the trials and tribulations of raising a child with autism. She does touch on the subject, of course, because there are definite challenges to working with a severely autistic child--but, as she notes, also everyday loves and victories. Parents whose children are diagnosed with autism are encouraged to seek support from groups and individuals who are also facing this diagnosis. Just knowing that someone else understands what you are saying, what is happening in your life, can be an important part of keeping parents of even severely affected autistic children on an even keel.

Debra Chwast has a masters in social work, and worked as a therapist for many years but, like many parents, when her son Seth was diagnosed with autism her first reaction was that of denial. There was nothing wrong with her son that a little love and working with him couldn't cure. Over the years, however, she realized that autism was a real thing and that her son would need her help for perhaps the rest of his life.

In her story she recounts the ways she attempted to communicate with Seth and her determination to bring him to the point where he could live in, and understand, her world. These attempts were, for the most part, unsuccessful, but she didn't give up. Even after she was advised that the most he might be able to do with his life was push a broom and mop, if he was lucky. Some may have stopped all effort with these words, but Debra Chwast barreled on, eventually enrolling Seth in an art class when he was 18. Little did she, or they, know at the time--with that art class, Seth had found a door to the world.

New friends are everywhere, according to Seth. He can talk, in that he knows the words, but can't really hold a conversation. He is unable to cross a street by himself, and is restricted in what food he can be around because he can't grasp which foods will set off his many allergies. He needs constant care--but that is not all there is to his life.

In An Unexpected Life: A Mother and Son's Story, one of Debra Chwast's main goals was to somehow allow her son Seth to live and communicate in her world. What art did for Seth, though, was give him the tools to open up the world he inhabits and let other see what he sees, and experience what he experiences. Seth and Debra's journey is their own and different from anyone else's, but the lessons learned, the triumphs celebrated and the joys experienced cross many of life's boundaries.

View Seth's Art and Learn More About Him

This was so moving. I like his work, and can't believe those people who don't trust the resources we humans have -- all of us.

What a talented young man. What beautiful art we all would have missed out on if he had taken the mopping up job! Seth's story is an inspiration to anyone who lives with an autistic child. 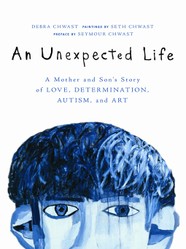