Ancient Rome was a republic and then an empire that existed for almost a thousand years. Today's world has inherited a wonderful heritage from ancient Rome.

The laws and civil administration of many countries, military organization, modern Western languages (such as English, French and Italian), art, architecture and engineering (including roads, aqueducts, public baths and theaters), and inventions (such as thermal heating) owe much to the civilization of ancient Rome. In this article we will explore some of the history of ancient Rome and its civilization and some stories of significant people (such as Julius Caesar and Caesar Augustus) who lived in that era.

According to Roman mythology, two brothers, Romulus and Remus, were born on the banks of the River Tiber and raised by a she-wolf. One of them, Romulus, founded the city-state of Rome on the River Tiber in the year 753 B.C.

Rome started out as an agricultural community but as time went by, it used its army to build an empire that ultimately stretched from modern-day Britain in the west through to Mesopotamia (modern-day Iraq) in the east and from northern Africa in the south to modern-day Germany in the north.

Rome began as a monarchy and then became a republic in the 6th century B.C. The republic was to last around 500 years. Then in 46 B.C. one of Rome's generals, Julius Caesar, was appointed as dictator and the Roman republic (ruled by a senate and consuls) became the Roman empire (ruled by autocratic emperors).

Some of the greatest rulers of the Roman empire included Julius Caesar, Augustus (also known as Octavian), Tiberius, Hadrian and Constantine.

Together with Pompey and Crassus, he first ruled Rome as part of a triumvirate (three-person rule). Later, Caesar demanded that he be appointed consul. This demand led to war with Pompey in which Caesar emerged triumphant and was made imperator (emperor of Rome). In 44 B.C. Caesar was assassinated by republicans who feared that Caesar's rule would end in tyranny.

Augustus was the next ruler after Julius Caesar. He was also the first emperor of the Roman empire.

He first formed a triumvirate with Anthony and Lepidus. He later went to war against Anthony and Cleopatra and after defeating them in the Battle of Actium (31 B.C.), he became the emperor of Rome.

The reign of Augustus was one of peace and prosperity. He improved the administration of the provinces and introduced religious, social and financial reforms (for example, by undertaking public works). His reign saw a flowering of the arts and wonderful writers such as Virgil, Ovid, Horace and Livy writing their masterworks (this period is often referred to as the Golden Age of Roman Literature).

The Roman Empire under Augustus

How the Roman Empire worked

Like many successful empires, the Roman Empire gained the acquiescence of the peoples it conquered by giving them some limited autonomy (as long as they acknowledged the Emperor) and by permitting them to retain much of their own cultures.

These cultures, in turn, were to influence the beliefs and culture of the Romans themselves. For example, when the Romans conquered Greece, the Romans were to adopt much of the Greek language, religion (including many of the Greek deities) and architecture (such as Greek temples with their columns).

Under the emperor Constantine, the Empire was to adopt the Christian religion.

What have the Romans ever done for us?

Skit from Monty Python and the Life of Brian

Rome's Legacy to Us

Many aspects of Roman life and culture have been passed on to succeeding generations and to us in the modern world.

* Military Organization
Innovations in strategy, tactics and training, Inventions and improvements to earlier inventions in areas such as armor and siege machines.

* Engineering
The extensive system of roads across the Roman empire, the bridges, dams and aqueducts, Hadrian's Wall, the sewage and internal heating systems were marvels of Roman engineering and many examples of these still survive.

* Art and Architecture
Roman baths, villas, and fora. In the mid-18th century, Roman architecture inspired neoclassical architecture such as the Old Museum in Berlin and the White House and the Capitol in Washington DC.

* Language
Latin was long used as a lingua franca across Europe. It was also used for many centuries as the language of the church and of science. Even today each species is written a Latin or a Latinized name. The script of English and many Western languages is written in Latin letters. Over 50% words in English are derived either directly or indirectly from Latin.

* Law
The principles and practice of Roman law have had a strong influence on law in the modern world, especially in those countries with a civil law (as against a common law) system. The system of trial with a judge, a defendant and a plaintiff was first established by the Romans.
* Literature
Virgil's poetry has been admired and imitated over the centuries as a model of poetic and religious excellence. Similarly Cicero's speeches have been viewed as models of oratory. The writing styles of Tacitus and other Roman historians have been imitated by later historians such as Edward Gibbon.

Ancient Rome on the Internet

Ancient Rome
Long article on the history, topography and archeology of Rome. This article was originally published in the 9th edition of the Encyclopaedia Britannica.

What have the Romans ever done for us?
"The legacy of the Romans is extremely important. Many things that form part of everyday life were introduced or improved by the Romans. Over the centuries since the collapse of the Roman Empire, Romans ideas, literature, art and architecture have influenced many people around the world."

[I give thanks to you. Your words in this article are good.]

Our whole civilisation is based on Ancient Rome isn't it? Great Monty Python sketch

A very good read , lots of information and you are right about how much our present day world owes to old civilisations. Of course here the UK, the main influence would be Rome and we still see it today in our place names, in the names of the planets and indeed even the clock hanging on my wall is in roman numerals to add a touch of elegance to things. I was interested to see your references to Greek influences on Rome. Very useful. Ty David.

I enjoy learning about such things. Thanks for writing it.

Thank you. I think that these days we often forget just how much we owe to the various civilizations of old.

I really enjoyed reading this - concise and yet encompassing.

All of us owe the world of ancient Greece a debt. The modern world has inheri...

Mahler: The Genius Who Composed the Resurrection Symphonyon 03/04/2012

Mendelssohn: The Genius Who Wrote The Hebrides Overtureon 03/04/2012
Ad 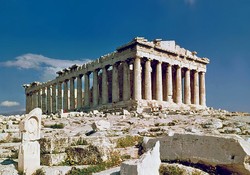 All of us owe the world of ancient Greece a debt. The modern world has inherited many valuable things from ancient Greece including drama, philosophy, medicine, and much more.
97%  17   8 cmoneyspinner
Ancient Era

Alexander the Great was not a prophet. But he does hold a place in history as being one of the most exceptional political and military leaders.
Loading ...
Error!