Mendelssohn: The Genius Who Wrote The Hebrides Overture

Felix Mendelssohn was a composer of the Romantic period. Mendelssohn's beautiful works combined a classical form combined a romantic style.

The grandson of Moses Mendelssohn who was a well-known philosopher, Felix Mendelssohn was born in Hamburg in 1809.

He showed musical talent at an early age and studied. He studied music -- first, at home, then in Paris and then in Berlin. He had his first public performance at the age of nine and produced his first musical composition by the time he was thirteen years old.

At the age of 16 and 17 he composed two works which showed his full musical genius -- the String Octet in E-flat major (1825) and the Overture to Shakespeare's A Midsummer Night's Dream. (In 1842 he also wrote incidental music for that play, including his well-known Wedding March, which is still played at many weddings today).

In 1821 Mendelssohn was introduced to Goethe, who was impressed by the young man and compared him to another musical prodigy, Mozart. Mendelssohn was to set a number of Goethe poems to music.

In 1829 Mendelssohn arranged and conducted the performance of Johann Sebastian Bach's St Matthew Passion. This work (and its composer) had been all but forgotten until this performance (its most recent performance had been in 1750). This performance was an important factor in the revival of the great composer, Bach.

Mendelssohn now began to travel around Europe, including to Britain, Italy and Austria. He was to visit Britain ten times in all. While in London in 1829 he conducted his Symphony No. 1 in C minor.

His visits to Scotland inspired him to write The Hebrides overture  (1829)(also known as Fingal's Cave overture, after the cave of the same name on the island of Staffa which he visited) and the Scottish Symphony (1830-42).

Similarly, his travels in Italy inspired him to create the Italian Symphony (1833).

During his final visit to Britain in 1849 he conducted his Scottish Symphony before Queen Victoria and Prince Albert.

In 1835 Mendelssohn took up his duties as the conductor of the Leipzig Gewandhaus Orchestra. He became very involved with developing the musical life of Leipzig. In 1843 he founded an important music school in Leipzig, the Leipzig Conservatory.

From 1840 he spent some time in Berlin, working on a proposed cultural center for that city.

In 1847 Mendelssohn died in Berlin, aged 37, after a number of strokes.

Orchestral Overtures: Including the overture to Shakespeare's A Midsummer Night's Dream (1826) and The Hebrides Overture (also known as Fingal's Cave) (1830).

Choral Works: These include the oratorios, St Paul (1836) and Elijah (1846), various Christian anthems (such as Hear My Prayer), and the tune which was adapted for Charles Wesley's hymn Hark the Herald Angels Sing.

Songs: Many songs, either for solo voice or for duet accompanied by piano, such as Auf Flügeln des Gesanges (On WIngs of Song), a poem by Heinrich Heine set to music by Mendelssohn.

The Hebrides Overture (by Felix Mendelssohn)

The Musical Legacy of Mendelssohn

Felix Mendelssohn wrote during the Romantic era of music but resisted the more revolutionary advances pioneered by Chopin, Berlioz, Wagner and Liszt.

His works were more conservative and looked back to the Classical era. They show the nobility of the Classical era, with Mendelssohn's own poetic sensibility, lightness and effervescence, as applied to Romantic and descriptive themes. Some critics say that Mendelssohn combined classical form with romantic style.

Mendelssohn's On Wings of Song

Read All About Mendelssohn: Books on Amazon

Mendelssohn on the Internet

What Mendelssohn said and what others said about him.

Felix Mendelssohn
Biography of the composers life, including a portrait.

Liszt: The Genius Who Composed the Hungarian Rhapsody
Franz Liszt was a Hungarian composer and pianist of the Romantic era. Some consider him the greatest virtuoso pianist of all time.

Wagner: The Genius Who Composed Tristan and Isolde
Richard Wagner was a great German composer of the 19th century. He wrote a number of magnificent operas, such as "Tannhauser", "Lohengrin" and "Tristan and Isolde".
Updated: 05/22/2015, DavidPaulWagner
Thank you! Would you like to post a comment now?
4

What an interesting background, Mendelssohn is another great I knew little about until now. I adore the romantic era. 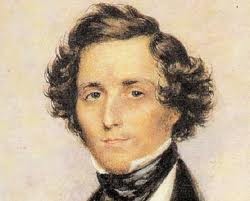