Ludwig van Beethoven is probably the best known composer of classical music. Who has not heard and loved his works such as the Moonlight Sonata?

Of all the great classical composers, Beethoven is without doubt the best known. Most people have heard at least some of Beethoven's works, such as the "Moonlight Sonata", or "Fur Elise", and or the opening bars of his Fifth Symphony. With his increasing deafness, Beethoven had to overcome huge obstacles when creating his divine music. Let us explore together a little about what makes Beethoven one of the world's master composers.

Born at Bonn in the Rhineland, Ludwig van Beethoven came from a family of court musicians and at the tender age of 12 he became deputy organist at the court of the Elector of Cologne.

The young Beethoven went to Vienna, where he impressed Mozart by his ability to improvise on the keyboard. Beethoven studied under Haydn and possibly also under Mozart.

The world at that time was one of revolution and upheaval. The American and French Revolutions had recently taken place. Napoleon was conquering Europe. Much of the spirit of these tumultuous times is reflected in the music of Beethoven. His Eroica symphony (1803) was originally dedicated to Napoleon, whom Beethoven saw as the champion of republican liberty.

Beethoven would perform his own compositions, playing the piano pieces and conducting the orchestral works. In 1801 he was increasingly afflicted with deafness (becoming completely death by 1824), which forced him to stop performing. He therefore never actually heard some of his final compositions being played. However, he continued to compose until his death.

Beethoven never married. He lost much of his savings in unwise investments and lived the latter part of his life in relative poverty.

Life of Beethoven in Pictures

Beethoven's works include nine symphonies, including
-- the Eroica (3rd Symphony),
-- the Pastoral (6th Symphony), and
-- the Choral (9th Symphony).

He also composed many piano sonatas (such as the Moonlight Sonata and the Appassionata), string quartets, piano concertos, violin concertos (such as the Kreutzer and the Spring), and one opera (titled Fidelio).

His music encompasses both the late Classical and the early Romantic periods.

The Legacy of Ludwig van Beethoven

Beethoven did not write for fame or glory. Czerny is reported to have said:

"When his friends ... speak to him of his youthful renown, he replies: 'Ah, nonsense! I have never thought of writing for renown and glory. What I have in my heart must out; that is why I write.' "

However, Beethoven's music was very popular in his own time (20,000 mourners attended his funeral) and remains hugely popular today. His Ninth Symphony (the Choral), which includes an excerpt from the great freedom poet Schiller's Ode to Joy, has been chosen as the anthem of Europe.

"A colossus beyond the grasp of most mortals, with his totally uncompromising power, his unsensual and uningratiating way with music as with people."

Beethoven on the Internet

Beethoven's Story
Beethoven's story is one of personal triumph over tragedy and supreme musical achievement. A complex and brilliant man, no composer before or since has exerted greater influence.

Beethoven Quotes and Quotations
Beethoven in his own words and what other people have said about Beethoven.

Brahms: The Genius Who Composed A German Requiem
In his personal life Brahms was a solitary figure who never married. But in music he was a master and one of history's greatest composers of symphonic music and songs.

Mozart: The Genius Who Composed The Magic Flute
Mozart's music has never been more popular. Movies have made about the man. So who was Mozart and what makes his music great?
Updated: 05/22/2015, DavidPaulWagner
Thank you! Would you like to post a comment now?
12

When my friend was suffering badly with Depressive Anxiety, I used to invite her round some evenings to eat ad my youngest son one evening played the Moonlight sonata for her on the piano . She Burst into tears and ran out into the garden . I stopped him playing it immediately and my friend came back in and said " NO . I'm crying because this piece of music has cleared my head so much and is the first thing that has made me feel better in a long time. "
Moonlight sonata I salute you .

Thanks for your very *sane* comment! My philosophy is that all kinds of music have something to offer and that, in order to get the most out of your musical experiences, you have to really invest some time in listening.

Beethoven and Mozart are geniuses. Musicians in totally different music genres - rock, pop, soul, jazz, etc. - they all know this. It is not a secret!! Listening to their music helps improve your thought process. Yeah! I mean ... unless you're totally insane like me and can't be helped! :)

It's funny, Beethoven is most known for the moonlight sonata but when I started listening to the other sonatas I started really liking some of the other ones better. Two of my favorites are the first one, and the last, which are like night and day...but I think both really beautiful pieces, and both highlighting a bit of Beethoven's zany and quirky side.

Thanks, Jo! I came to love the Moonlight Sonata by watching my mother, who was a music teacher, play this work on her piano. It was wonderful to watch and listen close up as she played the sonata with great expression and tenderness.

I adore Moonlit Sonata so much. I was told that he composed it when he was going deaf and this was his anger, then acceptance of that fact. It's just wow!

Congrats on your Editor's Choice for this, by the way. :)

My daughter plays violin and we've listened to classical music for years. This is a great resource. Thanks. Linda

Thanks for your comments, Anne and katiem2! I think that if we just give classical music a chance, we will find that there is a lot to like! 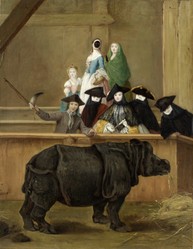 Venetian Curiosities by mystery writer Donna Leon brings together seven each of Venice's favorite tales to hear on streets and of Antonio Vivaldi's concerti to listen to at events.
Loading ...
Error!