Ann Askew was a young woman just wanting to share her beliefs. She was executed as a heretic in 1546 but was it really just a ploy to condemn Katherine Parr?

Ann Askew has her own thoughts and beliefs and happily spoke out about them. In today's world, this would have been allowed; but in 16th century England, she was viewed as a heretic. She was executed in 1545 by burning at the stake but her execution may have been a ploy to condemn Henry VIII's sixth wife, Katherine Parr.

The Early Years of Anne Askew

Ann was only young when she died, born in 1521. She was raised during the religious reformation, which would have played a large part in her own views of religion. The problem with the reformation is that it constantly changed under Henry VIII's rule and Tudor England. Henry VIII was raised a Catholic and found it very difficult to look at religion from a Protestant point of view. This made it exceptionally difficult for the likes of Ann, who wanted to preach about the Word of God and share her views.

Ann married Thomas Kyme, even though she did not love or care for him. As with many marriages in the 16th century, it was forced and a way for Ann's parents to gain something. She refused to take his name or to believe that her role in life was to be a mother to her two children. Kyme hated this about her and her views eventually led to her demise.

Kyme often ordered Ann to stay home but she enjoyed preaching about the Protestant faith. Kyme was a strong believer of the Catholic religion, growing up with that in mind. Out of protest, Ann left her home, with her books in tow, and moved to London. She soon gained a large group of followers and it is possible that Ann met some of the people of court, such as Anne Stanthope (Edward Seymour's wife) and Katherine Parr (Henry VIII's sixth wife and a protestant sympathiser).

While preaching, Ann was arrested. During her first arrest, she was sent warm clothes and food by Katherine Parr. No criminal charges were brought against her at first. She was sent back home to her husband, with the order to stop preaching. Being as strong-willed as she was, Ann refused to obey the law.

Before she left, she attempted to divorce Kyme by using the scriptures. She cited Corinthians 7:15, which states that Christians need not stay "bound" or "yolked" to non-believers; that God's peace would be granted to those who pursued devotion to God above a marriage tormented with issues of faith. She used this as a way to state that her husband was a non-believer but she did not get her own way.

The courts disagreed with Ann's view and she was sent back to her home. However, Ann still refused to act as a wife should at the time. She refused to obey the law. Her strong-will was the cause of her downfall but she believed she was doing right by preaching the Word of God. Ann left for London on two more occasions and was arrest both times; eventually the courts had to do something to stop her.

Ann's third arrest was her downfall. She found herself held for a longer period of time than ever before. Around this time, members of the court wanted to remove Katherine Parr from power. Katherine regularly debated with Henry VIII about his views on religion and politics and he was becoming tiresome of her. Ann's interrogators wanted to implicate Katherine in a plot with her.

Whether Ann knew Katherine and had met with her personally is unclear. Whatever the reason, she refused to say anything that would implicate anybody, especially the Queen of England. Ann was tortured as a way to get more information but there was one drawback; torture of a woman at this time was illegal.

The Constable of the Tower of London, Sir Anthony Kingston, did not like the idea of a woman being tortured; although he had seen plenty of people tortured before. He left the Tower when Ann was placed on the rack and appealed to the King. Henry VIII did not side with Kingston, stating that the devil could hide in anyone; either Henry VIII was fed up of Ann or wanted to implicate his wife. A deal was offered; Ann could live as long as she recanted her beliefs.

Ann's interrogation and torture continued while Kingston sought help but Ann remained firm and refused to implicate anybody else. Ann also refused to accept the deal. It is worth looking at it from a medical point of view; the rack would have led to Ann's arms and legs dislocating and the medical care would have made infection a high risk and recovery near-impossible. The discomfort Ann would have been in may have been worse than death at the time.

Read About Katherine Parr on Wizzley

Katherine Parr: A Very Lucky Woman or Just Incredibly Smart?
Katherine Parr married Henry VIII in 1543 and survived until after his death. Was this because she was smart or just plain lucky?

The Death of Katherine Parr: Four Marriages and One Daughter
On September 5, 1548, Katherine Parr died. By this point she had finally become the mother to a baby girl but never got to see her grow up.

Ann's faith was too strong for her to recant her beliefs, anyway. Nothing would change her thoughts or her determination to preach her beliefs. It was unfortunately that she was born in the 16th century and when the religious reformation was constantly going through changes. She was charged with heresy, which carried the automatic sentence of death by burning at the stake.

After the torture, Anne was unable to walk or stand. She had to be carried to her to her execution and tied onto a seat. She was executed on July 15, 1546.

Before her execution, she and others condemned to death at the time were preached to by Dr. Shaxton; a man who had recanted his own faith to avoid the same treatment. Ann interrupted his sermon to make comments about his views; sometimes confirming and other times contradicting his words. Gunpowder was laid around the victims to help spare them the true pain of being burned at the stake.

The court never managed to overthrow Katherine Parr, with or without Ann Askew. She apologised to Henry VIII and remained by his side until his own death in 1547.

Ann was a very stubborn and strong-minded woman; similar to Anny Boleyn just ten years earlier. She knew her beliefs and was not willing to let others tell her otherwise. Ann's fame after death grew, when she became a martyr, similarly to Sir Thomas Moore also about ten years before. In 1570, a passage from the Book of Martyrs by John Foxe about her was placed in Anglican churches around England.

You're welcome. I'm glad you enjoyed it.

Interesting historical article. Thanks for sharing.

I've often wondered that but I don't know enough about the suffragette movement to give it a good shot. Maybe an idea for you?

Ann Askew as a Suffragette... Yes! I can see that! There's a novel in there somewhere, surely.

Thank you, Jo. It's just a shame she was born when she was. I would have loved to have seen her during the suffragette movement.

I love seeing ladies like Ann Askew stepping out of the pages of history and screaming her rebel yell through the centuries. You made her come to life very well. :) 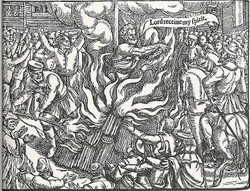