Apostrophes: How Do I Use Them Again?

Apostrophes have been called commas on a high. Some of us act a bit tipsy when we are faced with them in our writing.

Maybe you're a pro at using a comma, but what about their siblings the apostrophes?

Yes, they look like commas, too, only they're the soprano members of the punctuation choir. They can sound angelic when they hit their notes just right, but when they're off, hold your ears. What a shriek!

Do Apostrophes Cause You Anxiety?

Now a little background information as to why I chose to call punctuation a choir: I sing soprano in two different community choirs, and we are preparing for three performances over the next few weeks. A couple of the songs we are singing have some very high notes, at least for amateurs like us. When we hit them, boy do we sound good, but when we don't, ouch!

Practicing singing got me to thinking about apostrophes. I've just published a wizzle about how to use commas. Apostrophes look identical to commas except for where they are placed. As so many people feel mystified as to their proper use, it occurred to me that they were my next logical choice as a writing topic.

In some ways, apostrophe use is simpler to explain than comma use, as apostrophes don't come up nearly as often as commas do. Yet many people get confused as to where apostrophes should be used and why they are used, so here goes my explanation.

This Would Be Handy Hung by Your Writing Desk

When Do I Use the Apostrophe?

There are two main uses for the apostrophe: to show where a letter is missing and to show that something belongs to something or someone, otherwise known as possession.

The last sentence has an example of a contraction -- "that's." The two words that have been squished together are "that" and "is." When you make a contraction of those two words, you drop the "i" and put an apostrophe in its place to show that a letter is missing.

The thing to remember is that when you use a possessive pronoun, you don't need the apostrophe. You wouldn't say hi's when you mean his, would you? Then you shouldn't use "it's" when you mean "its" either.

An even easier way to remember which word is right is to read your sentence over, adding the letters that have been left out. So when you read "it's" in your writing, think in your head "it is." If it makes sense, you've used the right form. If it doesn't make sense, then maybe you mean "belonging to it," and you should leave the apostrophe out.

Contractions are used in more casual, chatty speech. Formal writing usually uses the more formal forms with no contractions. If you want to be one hundred percent sure of yourself, you can avoid contractions altogether if they are giving you trouble.

However, most online readers appreciate the friendlier feel of contraction use. It makes them feel they are talking to a real person, as most of us use contractions automatically when we speak. The simple practice is to read over what you've written, adding the extra letters in your head and checking for meaning.

Lynne Truss includes a funny but enlightening section in her book on the history of the use of apostrophes in the English language. They were originally used to indicate omitted letters but later came into use as a way to indicate possession. The printing industry was instrumental in establishing norms that we take for granted today. It seems people have been waffling over apostrophes for a long time!

Which One Should I Use?

Does This Make Sense Yet?

Do You Know When to Use an Apostrophe?

I am still very confused about it! http://www.showboxappz.net

I think I understand so far, but have a strange feeling there is more on the way...

I'm in no way a wizz, I get it, was a bit foggy on the exact details of English, been a while since college, amazing what we let fall to the way side using auto grammar check, spell check and the like. I really appreciate and needed these refresher courses.

Which One Do I Use?

Do I Need an Apostrophe for a Plural Noun?

Plurals don't require apostrophes. They are neither possessive nor contractions. No missing letters have been left out. But sometimes people use an apostrophe when they are showing more than one of something. Why?

I think this confusion comes because people mix up the apostrophe "s" that is needed for possession and then just use it for all uses of the letter "s" at the end of a word. There is also the fact that people often get mixed up when making a possessive when a word ends in "s," and then they generalize the apostrophe for all words with an "s" at the end.

For example, if I want to talk about the new bicycle that Beth Jones got for her birthday I might say "Beth Jones' bicycle." Or I could equally correctly say, "Beth Jones's bicycle." I remember feeling anxious about this rule when I was a kid. I wanted one of the two to be correct. I can remember that after this grammar lesson, some of my classmates who had never before had problems with plurals suddenly started adding apostrophes to their plurals. I'm not sure why, but maybe they generalized the either/or apostrophe rule to be legitimate for all uses of "s" at the end of a word.

Of course, sometimes you may want to use a plural word in the possessive form, and then you would use an apostrophe. For example, if three brothers were playing baseball, and some other kids walking by joined them, you could say they were all playing with the brothers' bat. You use an apostrophe after the "s" because the bat belongs to all three brothers. But if each brother had his own bat, you would say there were three bats, not three bat's. They were all playing with the brothers' bats.

Be kind to people who make this mistake, but for goodness sake, don't make it yourself! Grammar mistakes make your writing look careless, despite the fact you put so much care into the ideas you are trying to express. Of course, it's the ideas that matter the most, but using good grammar will make people sit up and listen. After all, it makes it sound as if you really know what you're talking about.

(Oops! I ended with a preposition! Grammar no-no!)

Join Us at Wizzley!

We all have things we can share with others, whether it's tips or recipes or just fun stuff. When you join Wizzley, you not only find a great place to share ideas for free, you also join a great community of writers who help each other succeed. Give it a try!

How to Use a Comma and More!

How to Use a Comma
Commas and how to use them turn some people in knots. Yet when used correctly, commas make the difference between text that is easy to read and text that makes no sense.
Updated: 10/17/2012, sheilamarie
Thank you! Would you like to post a comment now?
7

Comments: What Do You Think?

When tutoring English I used the following model for apostrophe s, which shows when and when not to use it.

Thanks, georgettejohn! I'm glad the article was helpful.

I need to bookmark this article for reference!!! I struggle at times with comma's (love to use them) too! Oh, and I love quotation marks and use them too frequently as well! "Great Article!"

Very useful info for everybody who posts anything online. I am not particularly good in English but I really don't like when somebody writes 'your' instead or 'you are' (oh, my, another use of apostrophes). I think this shows very low level of respect to language...
Thanks for your explanation and very clear examples.

Thank you so much, Katie! I'm not sure about the genius part, but you're right about the way our social networking and general internet use makes us all rather lax about punctuation and grammar generally. I was one of those kids in school who found grammar easy, and though I'm not always squeaky clean myself, I notice when grammar and spelling are overlooked. I must admit I read over my own writing again and again for fear I may have misused a word or missed the proper punctuation. That may sound sad to some, but in reality, I've gotten used to revising some of my poems and stories so many times I lose count. I consider that part of my job.
I always find your comments encouraging!

I think you're a genius to consider the apostrophe, we forget so much of what we learn in school. With the new age of computers, the Internet and all the social networking giving way to content we create all over the web, the proper use of apostrophes and other punctuation is a good reminder. Thanks and what a great asset to our writing community! 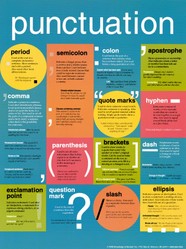 Commas and how to use them turn some people in knots. Yet when used correctly, commas make the difference between text that is easy to read and text that makes no sense.
100%  37   16 sheilamarie
Writing and Publishing