The difference between authentic Chinese food and Americanized Chinese food, different types of Chinese cuisine, and why I prefer the authentic stuff.

What exactly does it mean for Chinese food in the US or other Western countries to be "authentic"? This term usually refers to traditional food cultures that are less influenced by Western culture, the sorts of foods that have traditionally been eaten by Chinese people in China.

China is a vast country and has numerous different culinary traditions, so there is no single type of "authentic Chinese cuisine", but rather, there are many different regional traditions.

Cantonese food, left, and Szechuan (Sichuan) food, right, are two of the most common regional cuisines available in the U.S.

What is Americanized Chinese food?

Americanized Chinese food is its own culinary tradition, which was influenced by, but often bears little resemblance to several traditional Chinese food cultures.  Szechuan, Hunan, and Cantonese were the main influences on the Chinese food in America.

The Americanized food is characterized by:

There are also many dishes, like Ma Po Tofu or Kung Pao Chicken, which are common in both authentic and Amercanized traditions.  The Americanized versions usually are sweeter.

Are you familiar with the distinction between authentic and Americanized Chinese food?

How to tell if a Chinese restaurant is Americanized, or Serves Authentic, Traditional Chinese Food

Some restaurants even have a "Chinese menu", which may be written only in Chinese, or also in English, which which lists more traditional foods.

When choosing a restaurant, some things to look for:

Another tip...ask some of your Chinese friends, if you have any.

Keep in mind that even if you're at a generic Chinese take-out place, there may be a few more traditional items on the menu.  Learn how to locate and identify these items, and you'll be able to enjoy this type of food just about anywhere.

If I'm stuck eating at a cheap Chinese fast-food joint, and I see no evidence of authenticity on the menu, but I want something more authentic, there are a few dishes that I like to go to.  These are on the menu in most restaurants, and they're usually at least relatively closer to their "authentic" counterparts:

Some Types of Chinese Food

Here are a few types of Chinese regional cuisine that tend to be most available in the U.S:

Do you prefer Americanized or Traditional Chinese Food?

Awesome article! Reading through it, I've come to the realization that I've never had authentic Chinese food!

We had one place here that used to serve Manderine (not certain of the spelling) and then they closed. Now, we do have some other good places to eat, but they often cross several styles, and even cross into Vietnamese. My favorite is Won Ton soup. Most can handle this, but not all equally well.

Thanks for this, it's really interesting. We have a similar thing in London (for American read "Anglicised"). There are some authentic restaurants about, but some of it is also about how authentic we westerners want our food to be.

Never really thought this through, I never really liked most Chinese food, and I see why now - I wan't get the real thing.

This is one of my pet peeves. I hate when I go in a restaurant and order something and it's the Americanized version.

Thanks John for contributing more info on thees local dishes! I really appreciate it!

There are a few dishes in China that have sugar. In Fu JIan Province where I lived for 3 years, and where I frequently return, they have a local favorite dish called Li Zhi Rou. This is little squares of pork and potato that get covered with sweet potato powder and each fried separately. Then these are stir fried with some onions and peppers with a finishing touch of ketchup to get the red color of the sauce, Chinese ketchup is very sweet. Another favorite dish in this province is fried slices of Yu Tou, "Taro", that have honey added at the end of the frying. Liao Ning Province also has an egg plant dish that is served with a very hot melted sugar coating. However, you are correct that most traditional dishes don't have as much sugar as Western dishes. They also tend to never use tomatoes in a sauce like for Italian dishes. Many of the spicy sour dishes will have sugar added as well.

You found a liaoning place in upper darby? Don't leave me hanging - which one is it? 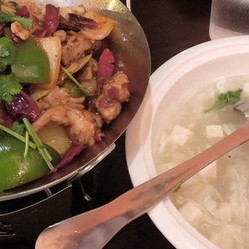 Why This Way is a consensus-based organization and belief system which may or may not be a religion, depending on your definition of religion.
42%  5   4 cazort
Web Startups