Coin collectors need to be aware of counterfeit coins, and know what can be done to protect themselves purchasing collectible coins.

Counterfeit coins have been a problem for a long time, but it is becoming a more persuasive problem in modern times. The production of counterfeit collectible coins appears to have evolved into a cottage industry in China, and online sites can be easily used to distribute them worldwide. Yes, many sites prohibit selling counterfeit coins, but the people selling them do not label their products as counterfeit.

If I Avoid Low Priced Coins from China Will I Be Safe?

The problem is there are unscrupulous people who buy coins well below the price they should be if they were genuine, then resell them as genuine coins.  So, a counterfeit coin from China might be available from a seller in the United States, or anywhere else.  This means they can be bought and resold many times, and some sellers may not even be aware their coins are counterfeit.

One series I am concerned about is the Disney coins from New Zealand.   I often see a six coin set advertised for under thirty dollars, yet the coins are reported to contain an ounce of fine silver each.  How can anyone sell you six ounces of fine silver with a metal value of over eighty dollars with over a fifty dollar discount below the metal’s value?  They can if the coins are plated with silver and not silver throughout.  I will not show the suspect coins here since I refuse to help promote them.

How Do You Detect Counterfeit Coins?

Buying coins is problematic unless you deal with someone you can trust, but if you carefully select the seller you can rest assured your coins are genuine.  The best source is to but directly from a government operated mint.  There are some mints that you can buy from, such as the Royal Mint, the Royal Canadian Mint and the Perth Mint from outside the United States, and can offer a greater variety than using only the United States Mint.

I recommend you find a mint that uses your language, so conversing with the mint is easy.  Those mints listed above ship to many places, and can take orders in English.  Just expect a small fee for currency conversion.

Below are linked images from the Royal Mint.  These are just a small sample of the coins available.  The Perth Mint produces some excellent coins, and issues colorized and gilded commemorative coinage for Australia and some small island nations.

Older Coins Cannot Be Bought from a Mint

For older coins you may not be able to buy from a mint.  Occasionally, coins a year or two old may still be available, but old, collectible coins are not to be found relying only on direct purchases from mints.

Detection of counterfeit coins falls on the buyer.  Several things can be easily examined in person, but not online.  First, check the weight of the coin against what your reference book indicates it should weigh.  Second, counterfeit coins are often, but not always, sloppily made.  Clear pictures may reveal this even online.  Then, a coin minted on a press has a different surface than a coin made from poured, molten metal.  Poured metal will possible cool with pits in the surface caused by small bubbles.  The pits are eliminated when the coin is subjected to pressure during the minting process.  Magnify the coin and inspect its surface.  And never underestimate the magnet test, which can detect a ferrous metal content.  If the coin is supposed to be gold or silver it will not be attracted to a magnet.

If you buy online make certain you can return a problem coin.  And, if the coin is expensive send it out to a reliable grading service quickly enough so you can return it is it is determined to be counterfeit.  The grading service experts at a good grading company are better at detecting a counterfeit coin than most collectors, but the cost of sending out low grade, inexpensive coins is too high to consider.

Lower grade coins is no guarantee the coin is genuine.  I once saw a trade dollar advertised in a lower grade, but it had a year no trade dollars were minted, indeed it was dated to before the United States existed.  No country mints money prior to the country’s existence.

The Advantages of Using the Royal Canadian Mint

The Royal Canadian Mint is particularly easy to work with.  They ship to the United States, and often ship free provided you buy one hundred Canadian dollars of coins at a time.  What really makes the Royal Canadian Mint a good source is the foreign coins it makes available.  There is some sort of agreement to sell some coins for other mints, and that list seems to be growing.  If you really want a Disney Princess coin from Niue, the coins are made by the New Zealand Mint and also sold by the Royal Canadian Mint.  This can really reduce your shipping cost if your order qualifies for free shipping.  And, the coins are genuine.  They were in the possession of two different mints, but both mints are respectable.

Currently, even the slabs are being counterfeited.  So, buying a graded coin is no guarantee of the authenticity of a coin.  This is the reason slabs are changed frequently, and such features as holograms have been added.  Holograms are difficult to replicate.

One quick look at the website of the company that graded the coin can help detect many counterfeits.  The number on the coin’s slab can be checked and if the number indicates a penny was assigned that number, but the coin in the slab is a dollar, suspect a major problem and avoid the purchase.  Often simply checking the numbers reveal many of the problems.

Determining genuine coins was the very reason the first grading started with ANACS, and they still do a credible job.  Also, PCCGS and NGC are good.  At my coin club most collectors and dealers rate PCGS first, NGC second, and ANACS third, with the nod going to ANACS for ancient coins.

This article links to affiliate programs through Viglink and Amazon.  Cookies may be added when clicking on a link so proper credit can be assigned to the link for commission purposes.

It is, and coins collected years ago are much less likely to have problems. Those taken from circulation should be fine, even today.

I never did collect coins but my mother and grandparents did. They only collected their coins from loose change, though. I can see where coin collecting can be an interesting hobby. 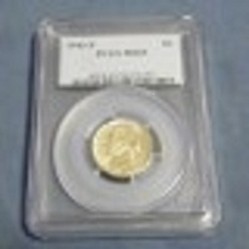