Coloring books are often used as a way to entertain babies and infants, giving them images to focus on. Many coloring books combine simple coloring pages with activities to help children learn and to hold their interest. Often, coloring books will make use of images and characters that are popular and recognized by the infant.

One popular example of this is the characters from the Baby Looney Tunes television series, which are recognized both from the series, and from the adult characters that they are derived from.

Looney Tunes is a widely known television series that was first released in the 1930s. Since its release, the show has gained substantial exposure across a wide range of media and has spawned numerous films, music albums, comics and other television series. The Looney Tunes characters are some of the most popular cartoons characters world-wide and tend to be instantly recognizable. These include the characters of Daffy Duck, Bugs Bunny, Tweety and Sylvester.

A spin-off television series is Baby Looney Tunes. This series showed a selection of the main characters from the Looney Tunes as infants. The series ran for two seasons, with a total of 53 episodes. The babies are looked after by Granny, and initially wore diapers, but partway through the series moved to them wearing nothing, similar to their adult counterparts.

One such book that is available is the Sports Baby Looney Tunes Learn and Color Workbook. This book is a combination of coloring pages and activities. The book is 96 pages long, and the pages are easily torn out. The style of the book is attractive for young children. Another book in the same series, the Baby Tweety & Bunny Learn & Color Workbook, looks at Tweety and Bugs Bunny. It has the same number of pages, but instead of focusing on all of the characters, it looks at just two. This is perfect for children who have either Bugs Bunny or Tweety as a favorite character.

A coloring book that is significantly larger than these is the Looney Tunes Super Big Coloring Book. Unlike the other books, this one is purely coloring pages, and features the characters as adults, rather than as infants. At 224 pages in length, the book is perfect for long road trips or other times when children need entertaining. It also contains 50 stickers, which can be a fascinating source of interest on their own for children.

Another Baby Looney Tunes book is Hangin’ with Bugs. This book mainly focuses on the character of Bugs Bunny. The book contains coloring pages, as well as puzzles, brainteasers and games. It is 32 pages in length.

A similar book is Tweet Dreams, which focuses on Tweety. This is longer, at 96 pages. 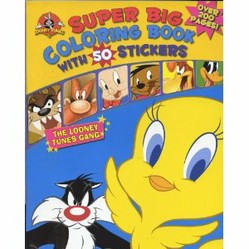