Baltimore, Riots, and the Need For Change

What happened in Baltimore this past week was atrocious. It was full of selfish acts that should - and can not - go unchallenged.

Baltimore, Maryland - a city of vibrant culture, great food, and terrible roads. It is a city who witnessed a great and terrible tragedy this past week that stemmed from the murder of twenty-five year old Freddie Gray. The riots that took place were saddening, horrendous, and unfortunately only one of many that have taken place in recent times.

From the Perspective of Someone Who Has Had Enough

The riots this past week in Baltimore were terrible. There is really no other way of saying it. Actually that statement is wrong. There are many other words to describe the chaos that ensued.

Yes, I said unfair. Unfair to whom? Everyone.

They were unfair to the family of Mr. Gray who begged for a peaceful justice for their slain loved one.

They were unfair to the peaceful protestors who got lumped in with the self-seekers who decided to make a battlefield out of the city.

They were unfair to the police officers, EMTs, and fire fighters who were trying to bring peace to the city.

Yes, that day was unfair to a lot of people.

It was unfair to the shop owners who had to go back to their stores the next day to see their livelihood in shambles.

What about the elderly who were counting on that new senior home that was just about finished? What will happen to them? It was definitely unfair to them.

What will happen to the thousands of commuters who now have to find alternate ways to get to work? Isn’t this unfair to them too?

I live in Annapolis, about forty-five minutes from the heart of the city. I know members of the National Guard who were dispatched into the city. I know people who have to now take the long way to work. I know innocent civilians who had to evacuate their homes because they feared for their lives that night.

When riots break out, it’s not just about the property and cars that get damaged. Whole communities, whole lives get thrown off balance.

However, this situation is more than just about the inconveniences that occur in the aftermath. We are talking about lives that are being lost for senseless reasons. Mr. Gray did not deserve to die just like every single life that is lost to police brutality is senseless and wrong. Our country is supposed to be known for giving their citizens fair and speedy trials. A person cannot get this trial if they are dead. Yes, Mr. Gray had a record against him, and yes he was foolish to run from the police. However, he did not deserve the death that he received. If you say that the police are just human and make mistakes then you must also agree that they need to be treated like humans and not put on these untouchable pedestals that we have given them. Politicians, military personnel, and police officers need to be held accountable for what they do just like the rest of us.

Ironically, I was watching Netflix today and saw the episode of “A Different World” where the police were found innocent of the beating of a black man named Rodney King and as a result, riots broke out in LA. That was twenty years ago, yet the uncanny resemblance to the situation in Baltimore gave me chills. Why have things still not changed? How long will the racism and actions of corrupt police officers go unchecked?

It is not simply because the officers involved can't for the life of them, remember what happened to Freddie Gray that caused his spine to be dislocated in such a way.

It is because America, with all its progressive thinking, is still facing the same issues it was facing decades ago. I pray for peace for this country and for justice to be served. I hope you are too.

A Different World - Honeymoon in LA

I apologize about the quality. However it should still be clear enough to see the similarities to the riots across this country.

I'm also really disturbed by learning about how so little has changed in the past 40 or so years, with respect to racism in America. Like, the civil rights movement seemed to bring huge improvements, but then after that, it was like the momentum stopped or something.

Like a lot of white people, I grew up believing in a myth that America was a post-racism society. Overt racism was taboo, and when I saw it it was explicitly condemned and frowned upon. Yet all around me were subtle forms of racism that I didn't see until I got older and started learning more and becoming closer to people of other races.

My high school was extremely multicultural; whites were a minority, and I think there I began to see some of the issues impacting people, like how people would express disapproval not of black people, but of aspects of black culture, or "inner city" or "urban" culture. But I think some of the realizations I only made in the past few years...when I started to see videos and news articles about all the unarmed black people being killed by police, all over the country, in many different states, not just in the deep south but in cities like Cleveland and NYC that I think of as racially progressive.

I had this "light bulb moment" when I realized...wow, these things have probably been going on, commonly, this whole time, it's just that until recently we didn't have the technology for everyday citizens to videotape them as easily. Before this, people's voices were being ignored, but now there's so much evidence that we can't ignore it any more.

On one level I'm really disturbed that it had to get to this point, but at the same time, I'm super grateful that people are finally confronting these things. I've seen people's viewpoints on these things change, already, in the past few years...people who had previously posted things that I saw as being racist in these subtle and indirect ways, now coming forth and acknowledging that there is a problem, in the violence and harassment committed by some police officers against black people and other minorities. I'm seeing a dramatic shift in the viewpoints of some people. I hope that the dialogue will continue, and quickly, because I would really like to see a swift and complete end to the racially-tinged violence and harassment carried out under the banner of "law enforcement" here in the U.S. 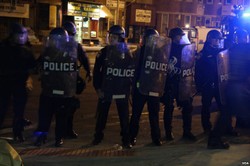