Barbie Doll For Leukemia Victims Is A Feel Good Story

A four-year old cancer victim gives Corporate America a chance to show it has a heart.
There are countless stories out there about young children facing great challenges as they confront life-threatening medical problems. They are all precious and we all feel the need to step up when calls for help are issued.
The other day I was reading a petition on Change.org that really, really tugged at my heartstrings. Perhaps you’ll be affected in the same way.

More than just a story of a young girl going through a long and arduous treatment regimen, this is a story of how a large corporate entity showed its heart. Rather than just a cold money-making enterprise the company revealed there are caring, feeling people working there and the fact that they stepped up says a lot for them, their company and how big business ought to be conducting itself (too often they don’t – example, the mortgage crisis).

Grace Bumstead of Los Angeles, California is four years old and was diagnosed with acute lymphoblastic leukemia. On her Facebook page, as well as on other social media sites and the family’s own website, her story is told in detail. But, a transformative moment took place when the charge nurse at Children’s Hospital in Los Angeles, where Grace is being treated, brought in a doll for Grace to play with. The doll, named "Ella," is a Barbie-type doll that was also ‘having’ chemotherapy. Ella was completely bald and “has two fancy wigs, a headscarf, and a headband. She is in a very fancy dress and still looks like a beautiful Barbie that any child would be excited to play with...and relate to,” writes Grace’s mother.

Here’s where the story gets really interesting. The Ella doll was a great toy for the young child, and others in similar circumstances to play with. But, there are very few of them. At this particular hospital there were only six dolls available. That meant that some children suffering through their leukemia treatments got the few dolls, but many others didn’t. Not that the other children didn’t have other “helping” dolls and other toys. But, Grace really took to this particular doll. Grace’s mother said “this doll helped us bridge a very hard topic and I know how much this doll will be a special friend to our daughter once her hair falls out.”

Reaching Out To Help Others

But Grace’s parents didn’t see this is a “just us” situation. They decided they needed to something so that every child could have an Ella doll if they wanted one.

Using social media and other publicity methods, they started a campaign to get the Mattel Company – the makers of Barbie/Ella – to make more of the special dolls. “We'd like every chemotherapy patient to have access to such an important and beautiful doll,” the Bumstead’s wrote in their change.org petition.

The efforts on change.org alone produced more than 100,000 supporters and petition signers. And guess what happened? The campaign worked! The Bumstead’s recently heard from Mattel who assured them they would make more Ella Barbies. “That means that every year hospitals and foundations will receive a fresh supply of dolls, so there will be more Ellas for kids with cancer like Grace,” said Grace’s mother.

Oh sure, producing a quantity of these dolls is not something that involves mega-bucks for Mattel, I’m sure. And I’m sure some suits in the company are worried that opening the doors to requests for more Ellas has them worried about other constituencies for a ‘special’ doll for their cause or need. But, undeterred, they decided to do the right thing and make sure all who want an Ella will have one.

If that’s not a refreshing thing to hear about, I don’t know what is.

Revisiting your wizzley led me to ponder other possibilities in the Barbie and Ken lines.

It looks like Barbie dolls now may be available in wheelchairs and with prosthetic limbs. But I see no equivalents for the Ken line. The latest dates on this information seem to be no recenter than 2020.

Would you happen to know if COVID-19 perhaps put a halt to the above-mentioned possibilities?

TheWritingCowboy, Do they have any equivalents for boy cancer patients?

That is such a beautiful story!

Having a deaf family member made me more aware of toys for hard of hearing or... 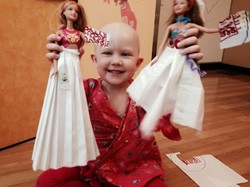 Having a deaf family member made me more aware of toys for hard of hearing or deaf children like this ASL Barbie Doll.
Loading ...
Error!