Did you know that 1 of the last surviving World War 1 battleships stands in Belfast harbour as a floating museum and tribute to the Battle Of Jutland 1916 ? I flew there yesterday.

It is easy for us to fly to Ireland and back in a day. The flight took 35 minutes!
I have been keen to see HMS Caroline since it opened after a 15 million pound restoration last year.

During Belfast's recent transformation as a tourist destination, HMS Caroline has been transformed into a floating museum in the Alexandra Dock, in the Titanic Quarter of Belfast.

It opened to the public for the centenary of the Battle of Jutland 2016 but closed again for further restoration and is now fully open to the pubic. It is a real bargain at only £7.50 for me to visit and took about an hour and half to view properly.

HMS Caroline is the last surviving warship of the Battle of Jutland.

You can see why I was keen to visit.

- a grey relic of Battle of Jutland

" ... the water for miles was oily and a filthy colour and the ship seemed to be ploughing her way through a mass of wreckage and mangled bodies.....

Very sad day in the fleet . Almost every ship has got dead laying on the quarter deck and the hospital ship is very busy. "

There can only be losers in such a conflict. The survivors are left with terrible memories for life.

The Caroline experience is cleverly done. As we walked through the door, a film reconstruction of the battle was taking place and we walked straight into the full sensory of a naval battle, sight and sounds. The noise was staggering and it was all a bit frightening to think what those sailors experienced.

Tour of the ship

I have decided to look at some of the differences in ship life to put a slightly different slant on the visit.

I really liked this record player because it adds a human perspective to the dehumanisation of war. This of course was for the captain's and officers' recreation not he crew's.

The ship's bell is a lovely addition to the boat and again, I think it adds a human element to the visit. I am fairly intuitive and could visualise someone standing there and ringing it.

As a keen cook, I am always fascinated by kitchens in such places as these. I could clearly visualise though, cooking a meal for a few hundred people under sea battle conditions. Horrendous!  AND..... treacherously cold NORTH SEA battles at that.

And finally what it is all about unfortunately. The guns...

The guns have been restored and stand on deck.

I am a great believer in the concept that we should never forget. Forgive yes... forget no. If we forget these things, it may all happen once more.

Keeping these events  in our consciousness through exhibits such as these is a good way hopefully to prevent these things happening again. They are also a tribute to those who have given their lives.

Rest in peace to the men of both sides.

If you are in Belfast, please do visit HMS Caroline at the Alexandra Dock.

The toilets were in a long line opposite the wash basins . The captain had his own of course.

Yes the hammocks swung wildly but there wouldn't have been much sleep during the battle of Jutland I suppose. It was a dreadful battle.

The pot jars on the tables were probably for bread

Veronica, Thank you for taking us through the HMS Caroline. Amen: "Rest in peace to the men of both sides."
Did the crew not have a lavatory? Did the hammocks of the crew stay in place or swing wildly with waves and wind? The sailors' table doesn't look quite so grim as I picture in my worst imaginings. What is in the two containers on the sailors' table: condiments or drink?

I can't wait to visit it.

Protecting the few trees that could not be moved was a very skilled task indeed for both the gardeners and the builders.

Thank you for that ; much appreciated. When I visited the place last February 2017, The Ravine was closed off obviously having major work so we went to the Ulster Museum and the Victorian green house.

I shall definitely be visiting The Ravine when I return to Belfast this year. I want to visit that and the Crumlin Road gaol.

Just to inform you, the Belfast Botanic Garden is re-opening its famous Ravine in Spring. This is a late nineteenth century fern house with sunken beds for ferns. It is divided into temperate and tropical zones, and it also displays palms and cycads, which are a relict kind of tree superficially similar to palms. There is,moreover, a waterfall and a grotto.

The project to rejuvenate the Ravine has taken a few years, during which the plants were dug up and temporarily rehoused to allow the ageing Victorian structure to be refurbished.

It sounds as if it would be well worth a visit.

It is my favourite city after Rome

I see Belfast as a triumph over adversity. What these people have overcome ! Belfast is a thriving city full of excellent attractions, beautiful hotels, lovely churches, shops restaurants and lovely people.

Don't be put off by Belfast's past. Its present and future are what matters.

You certainly love your trips to Belfast!

Is it not the case that we have moved on. Years ago Belfast would have been a no-no. [I went in 1970.] Now? What a city! A thriving metropolis.

John 111 TY.
I had wanted to see HMS Caroline for about 18 months but things always got in the way so I was absolutely delighted to see it . I was not disappointed. It was a marvellous trip.

Belfast is well worth a visit. I went 3 times last year. There is so much to do.

You are right about Jutland being a bad one. IT was a dreadful battle for casualties and fatalities.

This week I have had a short city break to Belfast. I tried to see things I ...

The beautiful city of Belfast is recovering from its troubled past. It is now developing its tourist industry, largely with help of the doomed ship "Titanic". I went recently.
100%  19   10 Veronica
Travel & Places 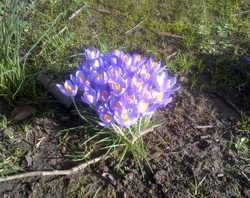 This week I have had a short city break to Belfast. I tried to see things I hadn't seen before. There is so much to see and do in this lovely city.
Loading ...
Error!