A selection of the California Sea Otter T-Shirts that depict these adorable creatures frolicking in the water.

Sea otters have never been more popular. The Monterey Bay Aquarium opened in 1978 and its otter exhibit remains among the most popular draws.

Each year about 1.8 million people come to the aquarium to view the local marine life. Sea otters, which used to roam the entire northern Pacific Ocean, now have a smaller habitat that includes the Central California coast, are, perhaps, the main attraction.

Pictures and videos of these adorable creatures are all over the Internet as well. So people living in other parts of the world, who may not have been familiar with them, can now watch them swimming on their back, the position they adopt while eating and traveling with their babies.

Sea otters are very sociable animals as well. Mothers take very good care of their young, leaving them in a kelp bed while they fish, so they don't get taken away by the strong currents. Clustering together in groups, at the surface of the water, also keeps them from being washed away by the tide.

The waters off of the Central California shoreline can get very chilly. Temperatures in the water stay at about 50-degrees F. It is very uncomfortable, and even dangerous, for a person to stay in this water for any length of time. In order for divers or surfers to spend time in this water, a wet suit is mandatory.

The warm-blooded sea otters, however, lives in the water. A thick coat of fur protects them to the point where their bodies underneath stay dry. The heavy fur also acts as a flotation device to keep them aloft.

Sea otters need this heavy coat because, unlike other marine animals, they don't have a layer of blubber to protect them from the elements.

Zazzle is a large online gift shop that has capitalized on the sea otter frenzy. It sells a line of custom-made sea otter t-shirts that are usually available nowhere else. Its products can be customized with different colored backgrounds. The t-shirts are available in different sizes as well, and in men and women's styles.

The one shown to the right is in the classic sea otter position of doing the backstroke. He also appears to be yawning. The California sea otters come in a variety of colors, which helps workers at the Monterey Bay Aquarium tell them apart.

Friends of the Sea Otter T-Shirt

The shirt shown below is made from 100 percent organic cotton. It is designed to raise awareness of the plight of the California sea otter, now considered an endangered species. Numerous sea otters once swam in the Pacific. However, it's now believed the population is no more than 28,000 in the wild. This species almost became extinct in the early 1900's, when it shrank to only about 1,500.

Other T-Shirts Designed to Save the Sea Otters

Zazzle sells a wide range of sea otter t-shirts, undoubtedly because this animal has become so popular. Here are two more, shown below, which make a passionate plea to help protect the natural habitat of these marine creatures, so they can reestablish themselves in the Pacific. The blue shirt shown on the right is made for children.

These are among my favorite animals, right up there with meerkats. Thanks for reading.

These are so cute! I didn't know they lived in CA. You taught me something today!

Thanks for reading VioletteRose. They are cute animals.

Thanks for sharing this much details on sea otters. I think I have seen them in the shedd aquarium, not sure if I have any images. The kids Tshirt with sea otter image looks so cute!

Very pretty and in fact different types of T shirts, have never known about these creatures before.

If you're not lovin' it, then show the world your disgust for one of the worl...

Are you looking for the Big Bang Theory's Sheldon Cooper's range of fun t-shi... 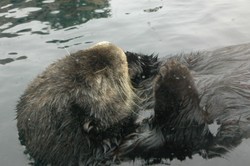 If you're not lovin' it, then show the world your disgust for one of the world's largest organizations. Here are just a few Anti-McDonald's T-shirts to choose from.
85%  6   9 lou16
T-shirts

Are you looking for the Big Bang Theory's Sheldon Cooper's range of fun t-shirts? If so you've come to the right place from vintage superheros t-shirts to the number 73 tee.
Loading ...
Error!