With the Marvel Avengers movie coming out soon, Marvel toys will be in demand. Find out about some of the great Marvel action figures you can buy.

There are many great Marvel figure out in the marketplace that you can add to your collection. Once the Avengers movie is released there will probably be a whole host of new figures that come out. Here are some of the better Marvel figures you can currently buy.

This Captain America action figure was sculpted by Diamond Giant Studios. This figure features 16 points of articulation so you can pose the figure in a wide variety of positions. The weapon is removable from the holster on the figure. This would be great for Any Captain America fan.Also comes with the famous Captain America shield. This character was a popular super hero during World War II. He is the alter ego of Steve Rogers who was enhanced by a serum to the peek of human perfection to aid the American war effort.

The Hulk is one of Marvel's most famous super heroes. He has appeared in comic books, television, movies, and animation. This figure stands 10" tall and has 14 points of articulation for various poses. The figure stands atop a rubber base that show effects of his damage. Hulk is the alter ego of Dr. Bruce Banner who turns into the powerful creature when he becomes angry.

This Iron Man figure is 6" in scale and he has a missile launch accessory. This figure is from the Iron Man 2 movie. This figure also comes with various hand poses you can take on and off the figure. Great Iron Man figure at a good price. Iron man is Tony Stark a billionaire and engineer. After a chest injury he must build the Iron Man suit to save his life. Many of the weapons he created are now a part of his suit and help him to fight the enemies against him. The character has been in two movies and will also be in the Marvel Avengers movie. Iron Man 3 is also scheduled to appear in theaters in 2013.

This Loki figure is based upon the likeness of actor Tom Hiddleston from the live-action Thor movie. The figure features 16 points of articulation. The figure ships with a stand that is based upon the mythical rainbow bridge of Asgard. He is the brother of Thor and the villain of the Marvel Avengers movie.

This Thor figure is based upon the likeness of Chris Hemsworth and features 16 points or articulation so the figure has many different poses. This is more of a display figure than for playing with. Great figure for fan of Thor. He is the son of Odin and the elder goddess Gaea. he has the power of Warrior Madness which will ill temporarily increase his strength and stamina.

This Black Window figure comes with 11 points of articulation and a tiny Ant Man figure. The display features destroyed robot debris. Another great character from the Marvel Avengers movie.

This Hawkeye figure includes a detailed base and points of articulation.This is a great looking Hawkeye figure. He is a very skilled archer and hardly ever misses.

In addition to these figures from the movie there are many other great figures out there such as She-Hulk, Spiderman, Colossus, Wolverine, Daredevil, Spider Woman,and a host of others. Look for new figures once the movie begins and more merchandise to be released.

Iron Man, Hulk, Hawkeye, Black Widow, Captain America, Thor, and Nick Shield director of S.H.I.E.L.D come together in the Avengers movie come together to save the world from disaster. The movie is based upon the marvel Universe and is scheduled for release on May 4, 2012. This will be the first time that this many super heroes appear on the screen at the same time in a live action movie. 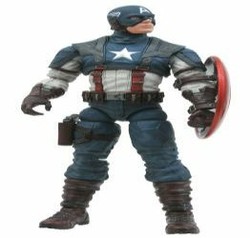