Since the 1970s, Bangkok has developed more shopping malls and shopping plazas than most S.E. Asian cities, but the older ones still offer value for money

Thanks to the BTS Skytrain and the MRT subway system, inner city travel in Bangkok has now moved closer to what it is like in other major world capitals. The city is huge and has more than one major shopping district, so a knowledge of the transport system is essential if one is to get the best out of a shopping trip in this most seductive (to shoppers) city.

Despite the name, a block of buildings

Once the main shopping area in the city, Siam Square has been overtaken by more modern shopping centres, but it still has its aficionados. Besides shops, there are many prep schools in the area so students throng the streets during evening and weekends. It was its close proximity to Chulalongkorn University (from whom the land was leased originally) that led to the growth of the shopping area.

Despite the name, Siam Square is actually a block of buildings, off which lies a warren of small sois (alleys) filled with tiny shops selling goods that attract mainly teenagers. If you want young and trendy fashions, the Siam Square shops are the places in which to find them. Alley after alley of quaint little shops carry the hottest new fashions, a mix of locally produced and imported goods alongside vintage clothing.

For that something special, look out for young Thai designer shops where you will find artistic, creative modern styles. These are often one-offs so be prepared to pay much more.

Hotels, restaurants and other shopping centres are now connected to Siam Square and there is an air-conditioned pedestrian overpass from MBK Centre, probably the student's favourite shopping centre in Bangkok.

Shops normally close around 9 p.m. after which street vendors open up their stalls opposite Siam Paragon until about midnight, selling mainly fake watches, belts, handbags and tee-shirts.

The square also has 3 cinemas dating from the late sixties and early seventies, the Scala Theatre and Siam Theatre offer single wide screen viewing and the Lido is a small multiplex with 3 screens.

Siam Paragon was the first mega-shopping complex in Bangkok and the first to offer an up-market experience to shoppers. World-class international brand shops and the Thai flagship shores of the most prestigious “names” means that Siam Paragon remains a paradise for those who believe in the concept of Shop Till you Drop.

These two famous Malls provide everything in the way of upmarket clothing and good food. Gaysorn is Bangkok’s ultra upscale shopping experience where luxury retail stores jostle alongside the stores of major designer brand names. There are fine jewellery boutiques where you can have jewellery specially designed and made up if you can’t find exactly what you are looking for among the ruby, sapphire, jade, diamonds and emerald necklaces, rings and earrings.

This 550,000 square-metre mall reopened in 2006 after a massive renovation making it the largest shopping centre in S.E. Asia (larger than Hong Kong’s Ocean Terminal). It also houses Thailand’s Knowledge Park, a complex of internet centres, 4D movie theatres, and a library.

Central World caters for all budgets and has a magnificent floor where mostly Thai products are sold, from silks to fine cottons, and handcrafts like hand-carved elephants and buffalo skin pictures. It would be possible to spend a full day in Central Worldk

MBK Bangkok is one of the best shopping malls in Thailand's capital.  It has everything an average visitor would want to buy and a centre for those things that most people buy when they come to Bangkok.

Best time to go is during the week when the crowds are less, but don't expect too much bargaining.  The prices are already to their lowest, so don't waste your time ou give in!

Unless you are a dedicated shopper, you will never get to visit all the outlets available and yu might not even get to visit each floor: there are six.  Don't arrange to meet anyone there as you will neverfind them - i guarantee this.

All these shopping malls can be reached by the overhead railway which is a cheap and reliable form of transport in Bangkok. 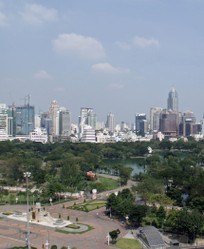